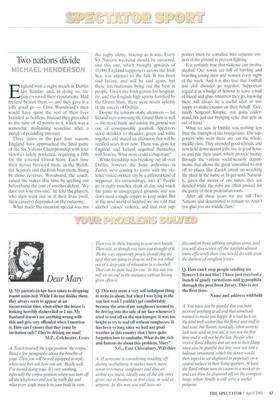 England won a rugby match in Dublin last Sunday, and, in doing so, the players saved their reputations. Had Ireland beaten them — and they gave it a jolly good go — Clive Woodward's men would have spent the rest of their lives branded as bottlers. Instead they prevailed to the tune of 42 points to 6, which was a somewhat misleading scoreline after a match of pounding intensity.

Three times in the past four seasons England have approached the final game of the Six Nations Championship with four victories safely pocketed, requiring a fifth for the coveted Grand Siam. Each time their nerves betrayed them, as the Welsh, the Scottish and the Irish beat them. Stung by those reverses, Woodward, the coach, raised the stakes this time by spelling out beforehand the cost of another defeat. 'We dare not lose this one,' he told the players, who then went out as if their lives (well, their careers) depended on the outcome.

What made the occasion special was not the rugby alone, bracing as it was. Every Six Nations weekend should be savoured, and this one, which brought upwards of WOO England supporters across the Irish Sea, was enjoyed to the full. It has been said before, and will be said again, but these internationals bring out the best in people. Given the Irish genius for hospitality, and the English high spirits fortified by the Grand Slam, there were revels aplenty in the streets of Dublin.

Despite the tensions of the afternoon — for Ireland were contesting the Grand Slam as well — the mood inside and outside the ground was one of unsurpassable goodwill. Spectators stood shoulder to shoulder, green and white together, and shared an afternoon that will be recalled years from now. There was glory for England, and Ireland acquitted themselves with honour. What more could a chap want?

While friendship was breaking out all over Dublin, however, the Swiss authorities in Zurich were coming to terms with the violence visited on their city by a different kind of supporter. It's extraordinary, isn't it? People go to rugby matches, drink all day, and watch the game in unsegregated grounds, and you don't need a single copper to keep order. But in the mad world of kickball we are told that alcohol 'causes' violence, and that rival sup porters must be corralled into separate corners of the ground to prevent fighting.

It is certainly true that violence can involve alcohol. Our towns are full of bawling and brawling young men and women every night of the week. And it is also true that football and civil disorder go together. Supporters regard it as a badge of honour to leave a trail of blood and glass wherever they go, knowing there will always be a useful idiot or two happy to make excuses on their behalf. 'Gee. kindly Sergeant Krupke, you gotta understand,/It's just our bringing upke that gets us out of hand.'

What we saw in Dublin was nothing less than the triumph of the bourgeoisie. The supporters who went there are, on the whole, middle class. They attended good schools, and now hold down decent jobs, live in good houses and pay their taxes, which provide money through the various social-security departments that allows the great unwashed to trot off to places like Zurich intent on wrecking the place in the name of In-ger-land. Naturally, given the mores of our times, they are derided while the yobs are often praised for the purity of their proletarian roots.

After all these years we are still Two Nations, and determined to remain so. Aren't you glad you are middle class?