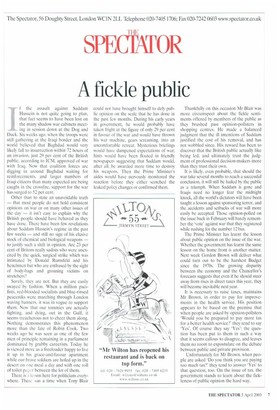 1 , f the assault against Saddam , Hussein is not quite going to plan, that fact seems to have been lost on . the many shadow war cabinets meeting in session down at the Dog and Duck. Six weeks ago, when the troops were still gathering at the Iraqi border and the world believed that Baghdad would very likely fall to insurrection within 72 hours of an invasion, just 29 per cent of the British public, according to ICM, approved of war with Iraq. Now that coalition forces are digging in around Baghdad waiting for reinforcements, and larger numbers of Iraqi citizens than many expected are being caught in the crossfire, support for the war has surged to 52 per cent.

Other than to state an unavoidable truth — that most people do not hold consistent opinions on war or on many other issues of the day — it isn't easy to explain why the British people should have behaved as they have done. There have been few revelations about Saddam Hussein's regime in the past few weeks — and still no sign of his elusive stock of chemical and biological weapons — to justify such a shift in opinion. Are 23 per cent of Britons really sadists who were unexcited by the quick, surgical strike which was intimated by Donald Rumsfeld and his henchmen but who are enthused by the sight of body-bags and groaning victims on stretchers?

Surely, they are not. But they are easily swayed by fashion. When a million pacifists, red-blooded socialists and blue-rinsed peaceniks were marching through London waving banners, it was in vogue to support them. Now that our tommies are actually fighting, and dying, Out in the Gulf, it seems treacherous not to cheer them along. Nothing demonstrates this phenomenon more than the fate of Robin Cook. Two weeks ago he was seen as one of the few men of principle remaining in a parliament dominated by grubby careerists. Today he is viewed more as a freeloader happy to live it up in his grace-and-favour apartment while our brave soldiers are holed up in the desert on one meal a day and with one roll of toilet paper between the lot of them.

There is a lesson here for politicians everywhere. There was a time when Tony Blair could not have brought himself to defy public opinion on the scale that he has done in the past few months. During his early years in government, he would probably have taken fright at the figure of only 29 per cent in favour of the war and would have thrown his war machine, gears screaming, into an uncomfortable retreat. Mysterious briefings would have dampened expectations of war; hints would have been floated in friendly newspapers suggesting that Saddam would, after all, be awarded more time to destroy his weapons. Then the Prime Minister's aides would have nervously monitored the reaction before they either scotched the leaked policy changes or confirmed them. Thankfully on this occasion Mr Blair was more circumspect about the fickle sentiments offered by members of the public as they brushed past opinion-pollsters in shopping centres. He made a balanced judgment that the ill intentions of Saddam justified the cost of his removal, and has not wobbled since. His reward has been to discover that the British public actually like being led, and ultimately trust the judgment of professional decision-makers more than they trust their own.

It is likely, even probable, that should the war take several months to reach a successful conclusion, it will still be hailed by the public as a triumph. When Saddam is gone and Iraqis need no longer fear the midnight knock, all the world's dictators will have been taught a lesson against sponsoring terror, and the accidents and setbacks of war will more easily be accepted. Those opinion-polled on the issue back in February will barely remember the 'vote' against war that they registered while rushing for the number 12 bus.

The Prime Minister has learnt the lesson about public opinion on the issue of the war. Whether the government has learnt the same lesson on the home front is another matter. Next week Gordon Brown will deliver what could turn out to be the harshest Budget since the 1970s. The growing disparity between the economy and the Chancellor's forecasts suggests that even if he should steer away from rises in direct taxes this year, they will become inevitable next year.

It is necessary to raise taxes, maintains Mr Brown, in order to pay for improvements in the health service. His position appears to be based on the premise that when people are asked by opinion-pollsters 'Would you be prepared to pay more tax for a better health service?' they tend to say 'Yes'. Of course they say 'Yes': the question has been put to them in such a way that it seems callous to disagree, and leaves them no room to expostulate on the debate between public and private provision.

Unfortunately for Mr Brown, when people are asked 'Do you think you are paying too much tax?' they tend to answer 'Yes' to that question, too. On the issue of tax, the government stands to learn about the fickleness of public opinion the hard way.