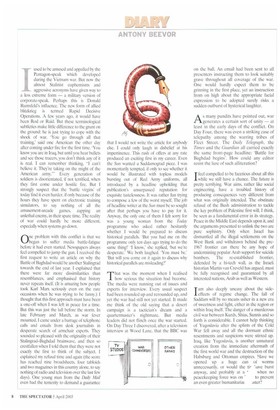 Page 8, 5 April 2003 — I used to be amused and appalled by the Pentagon-speak which
Close

developed during the Vietnam war. But now the almost Stalinist euphemisms and aggressive acronyms have given way to a less extreme form — a military version of corporate-speak. Perhaps this is Donald Rumsfeld's influence. The new form of allied blitzkrieg is termed Rapid Decisive Operations. A few years ago, it would have been Rod or Raid. But these terminological subtleties make little difference to the grunt on the ground: he is just trying to cope with the shock of war. 'You go through all that training,' said one American the other day after coming under fire for the first time. You know you are in Iraq, but until you hear bullets and see those tracers, you don't think any of it is real. I can remember thinking, "I can't believe it. They're taking on the might of the American army." Every generation of soldiers is disorientated, if not terrified, when they first come under hostile fire. But I strongly suspect that the 'battle virgins' of today find it even harder, if only because of the hours they have spent on electronic training simulators, to say nothing of all the amusement-arcade games, zapping an unlethal enemy, in their spare time. The reality of war could hardly be more different, especially when systems go down.

Cye problem with this conflict is that we egan to suffer media battle-fatigue before it had even started. Newspapers always feel compelled to jump the gun. I received the first request to write an article on why the Battle of Baghdad would be another Stalingrad towards the end of last year. I explained that there were far more dissimilarities than resemblances, and emphasised that history never repeats itself. (It is amazing how people took Karl Marx seriously even on the rare occasions when he was trying to be funny.) I thought that this first approach must have been a one-off when I was left in peace for a time. But this was just the lull before the storm. In late February and March, as war fever mounted, I came under a barrage of telephone calls and emails from desk journalists in desperate search of armchair experts. They sounded so pleased with the originality of their Stalingrad–Baghdad brainwave, and then so crestfallen when I told them that they were not exactly the first to think of the subject. I explained my refusal time and again (the score has reached nine broadsheets, four tabloids and two magazines in this country alone, to say nothing of radio and television over the last few days). One young man from the Daily Mall even had the temerity to demand a guarantee that I would not write the article for anybody else. I could only laugh in disbelief at his impertinence. This rush of offers at any rate produced an exciting first in my career. Even the Sun wanted a Saddamograd piece. I was momentarily tempted, if only to see whether it would be illustrated with topless models bursting out of Red Army uniforms, all introduced by a headline upholding that publication's unsurpassed reputation for exquisite tastelessness. It was rather fun trying to compose a few of the worst myself. The job of headline writer at the Sun must be so sought after that perhaps you have to pay for it. Anyway, the only one of them I felt sorry for was a young woman from the Today programme who asked rather hesitantly whether I would be prepared to discuss historical parallels. 'But you had me on the programme only ten days ago trying to do the same thing!' I know,' she replied, 'hut we're desperate.' We both laughed. You must be.' 'But will you come on it again to discuss why historical parallels are misleading?'

That was the moment when I realised how serious the situation had become. The media were running out of issues and experts for interview. Every usual suspect had been rounded up and rerounded up, and yet the war had still not yet started. It made me think of the old saying that a desert campaign is a tactician's dream and a quartermaster's nightmare. But media leaders did not flinch once the war started, On Day Three I discovered, after a television interview at Wood Lane, that the BBC was

on the ball. An email had been sent to all presenters instructing them to look suitably grave throughout all coverage of the war. One would hardly expect them to be grinning in the first place, yet an instruction from on high about the appropriate facial expression to be adopted surely risks a sudden outburst of hysterical laughter.

As many pundits have pointed out, war generates a certain sort of unity — at least in the early days of the conflict. On Day Four, there was even a striking case of telepathy among the warring tribes of Fleet Street. The Daily Telegraph. the Times and the Guardian all carried exactly the same front-page headline: 'Battle for Baghdad begins'. How could any editor resist the lure of such alliteration?

Ifeel compelled to be facetious about all this while we still have a chance. The future is pretty terrifying. War aims, rather like social engineering, have a troubled history of producing consequences very different from what was originally intended. The obstinate refusal of the Bush administration to tackle the key problem of Palestine first will, I think, be seen as a fundamental error in its strategy. Peace in the Middle East depends upon it, and the arguments presented to unlink the two are pure sophistry. Only when Israel has dismantled all the illegal settlements on the West Bank and withdrawn behind the pre1967 frontier can there be any hope of undermining popular Arab support for suicide bombers. The re-established frontier, defended by a hi-tech wall, as the Israeli historian Martin van Creveld has argued, must be fully recognised and guaranteed by all interested nations, Arab as well as Western.

Tam also deeply uneasy about the side

effects of regime change. The fall of Saddam will by no means usher in a new era of sweetness and light, either in the region or within Iraq itself. The danger of a murderous civil war between Kurds, Shias, Sunnis and so forth is considerable. I cannot help thinking of Yugoslavia after the splints of the Cold War fell away and all the dormant ethnic resentments and suspicions were stirred up. Iraq, like Yugoslavia, is another unnatural creation from the immediate aftermath of the first world war and the destruction of the Habsburg and Ottoman empires. Have we opened up a huge can of worms unnecessarily, or would the tir 'rave burst anyway, and probably at a ' when no peacekeeping force was on ' to prevent an even greater humanitariai Aster?