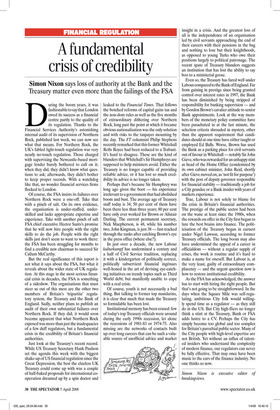 A fundamental crisis of credibility

Simon Nixon says loss of authority at the Bank and the Treasury matter even more than the failings of the FSA During the boom years, it was fashionable to say that London owed its success as a financial centre partly to the quality of its regulation. Thanks to the Financial Services Authority’s astonishing internal audit of its supervision of Northern Rock, published last week, we can now see what that means. For Northern Rock, the UK’s fabled light-touch regulation was very nearly no-touch regulation. Those charged with supervising the Newcastle-based mortgage lender barely bothered to call on it; when they did, they didn’t know what questions to ask; afterwards, they didn’t bother to keep proper records. With a watchdog like that, no wonder financial services firms flocked to London.

Of course, the FSA insists its failures over Northern Rock were a one-off. Take that with a pinch of salt. On its own evidence, the organisation is under-staffed, underskilled and lacks appropriate expertise and experience. Take with another pinch of salt FSA chief executive Hector Sants’s promise that he will now hire people with the right skills to do the job. People with the right skills just don’t seem to want to work there: the FSA has been struggling for months to find a credible new chairman to succeed Sir Callum McCarthy.

But the real significance of this report is not what it says about the FSA, but what it reveals about the wider state of UK regulation. At this stage in the most serious financial crisis in decades, the FSA is something of a sideshow. The organisations that must steer us out of this mess are the other two members of Britain’s ‘tripartite’ regulatory system, the Treasury and the Bank of England. Sadly, neither plans to publish an audit of their own substantial failures over Northern Rock. If they did, it would soon become apparent that what Northern Rock exposed was more than just the inadequacies of a few duff regulators, but a fundamental crisis in the credibility of Britain’s financial authorities.

Just look at the Treasury’s recent record. While US Treasury Secretary Hank Paulson set the agenda this week with the biggest shake-up of US financial regulation since the Great Depression, the best the clueless UK Treasury could come up with was a couple of half-baked proposals for international cooperation dreamed up by a spin doctor and leaked to the Financial Times. That follows the botched reforms of capital gains tax and the non-dom rules as well as the five months of extraordinary dithering over Northern Rock, long past the point at which it became obvious nationalisation was the only solution and with risks to the taxpayer mounting by the day. The FT columnist Philip Stephens recently remarked that this former Whitehall Rolls Royce had been reduced to a Trabant. It’s hard to disagree. These are the kind of blunders that Whitehall’s Sir Humphreys are supposed to help ministers avoid. Either the Treasury is no longer capable of providing reliable advice, or it has lost so much credibility its advice is no longer taken.

Perhaps that’s because Sir Humphrey was long ago given the boot — his experience irrelevant to a government that had abolished boom and bust. The average age of Treasury staff today is 34; 50 per cent of them have been there less than three years; 80 per cent have only ever worked for Brown or Alistair Darling. The current permanent secretary, Nick Macpherson, is 48, while his number two, John Kingman, is just 38 — fast-tracked through the ranks after catching Brown’s eye in the press office (where else?).

In just over a decade, the new Labour kulturkampf has undermined a century and a half of Civil Service tradition, replacing it with a kindergarten of politically correct, politically subservient financial ingénues well-honed in the art of devising eye-catching initiatives on trendy topics such as Third World debt, but manifestly unable to cope with a real crisis.

Of course, youth is not necessarily a bad thing. But talking to former top mandarins, it is clear that much that made the Treasury so formidable has been lost.

Institutional memory has been erased: few of today’s top Treasury officials were around during the early 1990s recession, let alone the recessions of 1981-83 or 1974-75. Also missing are the networks of contacts built up over long careers that can be such a valuable source of unofficial advice and market insight in a crisis. And the greatest loss of all is the independence of an organisation led by civil servants approaching the end of their careers with their pensions in the bag and nothing to lose but their knighthoods, as opposed to young Turks who owe their positions largely to political patronage. The recent spate of Treasury blunders suggests an institution that has lost the ability to say boo to a ministerial goose.

Even so, the Treasury has fared well under Labour compared to the Bank of England. Far from gaining in prestige since being granted control over interest rates in 1997, the Bank has been diminished by being stripped of responsibility for banking supervision — and by Gordon Brown’s cavalier attitude to senior Bank appointments. Look at the way members of the monetary policy committee have been parachuted in at the last minute, the selection criteria shrouded in mystery, other than the apparent requirement that candidates should at one time have either taught or employed Ed Balls. Worse, Brown has used the Bank as a parking place for civil servants out of favour in Whitehall — notably Sir John Gieve, who was rewarded for an unhappy stint as head of the Home Office (condemned by its own cabinet minister, John Reid, shortly after Gieve moved on, as ‘not fit for purpose’) with the post of deputy governor responsible for financial stability — traditionally a job for a City grandee or a Bank insider with years of markets experience.

True, Labour is not solely to blame for the crisis in Britain’s financial authorities. The prestige of the public sector had been on the wane at least since the 1980s, when the rewards on offer in the City first began to lure the best brains into finance. The politicisation of the Treasury began in earnest under Nigel Lawson, according to former Treasury officials. The long boom may also have undermined the appeal of a career in officialdom — without a regular supply of crises, the work is routine and it’s hard to make a name for oneself. But Labour is, at the very least, guilty of extraordinary complacency — and the urgent question now is how to restore institutional credibility.

As the FSA has acknowledged, the answer has to start with hiring the right people. But that’s not going to be straightforward. In the days when the Square Mile was self-regulating, ambitious City folk would willingly spend time as a regulator — as they still do in the US. But City high-fliers no longer think a stint at the Treasury, Bank or FSA adds lustre to a CV. Perhaps the City has simply become too global and too complex for Britain’s parochial public sector. Many of the City people with high-level expertise are not British. Yet without an influx of talented insiders who understand the complexity of modern finance, our regulators can never be fully effective. That may once have been music to the ears of the finance industry. No one thinks so now.