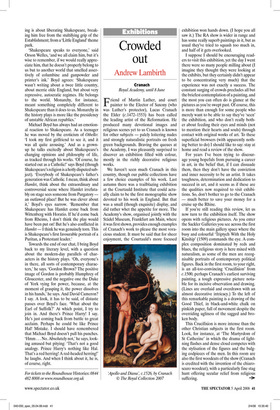 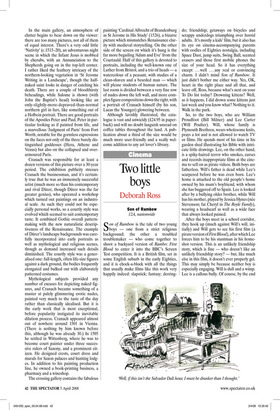 Royal Academy, until 8 June Friend of Martin Luther, and court painter to the Elector of Saxony (who was Luther’s protector), Lucas Cranach the Elder (c.1472–1553) has been called the leading artist of the Reformation. He produced many devotional images and religious scenes yet to us Cranach is known for other subjects — palely loitering nudes and strongly naturalistic portraits on fresh green backgrounds. Braving the queues at the Academy, I was pleasantly surprised to discover an exhibition filled with colour, mostly in the richly decorative religious works.

We haven’t seen much Cranach in this country, though our public collections have a few choice examples of his work. Last autumn there was a trailblazing exhibition at the Courtauld Institute that could actually claim to be the first monographic show devoted to his work in England. But that was a small (though exquisite) display, and did rather whet the appetite for more. The Academy’s show, organised jointly with the Städel Museum, Frankfurt am Main, where it was first shown, provides enough examples of Cranach’s work to please the most voracious student. It must be said that for sheer enjoyment, the Courtauld’s more focused exhibition won hands down. (I hope you all saw it.) The RA show is wider in range and has some really superb paintings in it, but as usual they’ve tried to squash too much in, and half of it gets overlooked.

I suppose I should be encouraging readers to visit this exhibition, yet the day I went there were so many people milling about (I imagine they thought they were looking at the exhibits, but they certainly didn’t appear to be concentrating very much) that the experience was not exactly a success. The constant surging of crowds precludes all but the briefest contemplation of a painting, and the most you can often do is glance at the pictures as you’re swept past. Of course, this is more than enough for some people who merely want to be able to say they’ve ‘seen’ the exhibition, and who don’t really bother about feeding their eyes and minds (not to mention their hearts and souls) through contact with original works of art. To these superficial browsers (with apparently nothing better to do) I should like to say: stay at home and read a review of the show.

For years I’ve been trying to discourage young hopefuls from pursuing a career in art, in the belief that, if I can dissuade them, then they don’t have the conviction and inner necessity to be an artist. It takes toughness, determination and dedication to succeed in art, and it seems as if these are the qualities now required to visit exhibitions. So, don’t bother to go to the Cranach — much better to save your money for a cruise up the Rhine.

If you’re still reading this review, let us now turn to the exhibition itself. The show opens with religious pictures. As you enter the Sackler Galleries you see across the first room into the main gallery space where the busy and colourful ‘Triptych With the Holy Kinship’ (1509) commands the eye. A complex composition dominated by reds and blues, the religious story is here mixed with naturalism, as some of the men are recognisable portraits of contemporary political figures. Back in the first room, to your right, is an all-too-convincing ‘Crucifixion’ from c.1500, perhaps Cranach’s earliest surviving painting, a tough expressive picture notable for its incisive observation and drawing. (Lines are overlaid and overdrawn with an almost decorative intricacy.) To the left of this remarkable painting is a drawing of the Good Thief, in black-and-white chalk on pinkish paper, full of movement despite the overriding ugliness of the sagged and broken body.

This Crucifixion is more intense than the other Christian subjects in the first room. Look, for instance, at ‘The Martyrdom of St Catherine’ in which the drama of lightning flashes and dense cloud competes with the stylisation of the figures and the bulging codpieces of the men. In this room are also the first woodcuts of the show (Cranach is credited with the invention of the chiaroscuro woodcut), with a particularly fine stag hunt offering secular relief from religious suffering. In the main gallery, an atmosphere of clutter begins to bear down on the viewer: there are too many pictures, not all of them of equal interest. There’s a very odd little ‘Nativity’ (c.1515–20), an adventurous night scene in which the Infant Jesus is mobbed by cherubs, with an Annunciation to the Shepherds going on in the top-left corner. I rather liked the feathery intricacy of the northern-looking vegetation in ‘St Jerome Writing in a Landscape’, though the halfnaked saint looks in danger of catching his death. There are a couple of bloodthirsty beheadings, while Salome is shown (with John the Baptist’s head) looking like an only-slightly-more-depraved-than-normal northern girl in furs, like something out of a Holbein portrait. There are good portraits of the Apostles Peter and Paul, Peter in particular looking as if painted from life, and a marvellous ‘Judgment of Paris’ from Fort Worth, notable for the gormless expressions on the faces not only of the three barely distinguished goddesses (Hera, Athene and Venus) but also on the collapsed and overarmoured Paris.

Cranach was responsible for at least a dozen versions of this picture over a 30-year period. The exhibition publicity stresses Cranach the businessman, and it’s certainly true that he was an immensely successful artist (much more so than his contemporary and rival Dürer, though Dürer was the far greater genius), who operated a workshop which turned out paintings on an industrial scale. As such they could not be especially personal works, so a courtly style was evolved which seemed to suit contemporary taste. It combined Gothic overall patternmaking with the new naturalistic descriptiveness of the Renaissance. The example of Dürer’s landscape backgrounds was carefully incorporated into early portraits as well as mythological and religious scenes, though as demand increased such details diminished. The courtly style was a generalised one: full-length, often life-size figures against a dark ground, the bodies frequently elongated and bulked out with elaborately patterned costumes.

Mythological subjects provided any number of excuses for depicting naked figures, and Cranach became something of a master at palely glimmering erotic nudes, painted very much to the taste of the day rather than classically idealised. But it is the early work that is most exceptional, before popularity instigated its inevitable dilution process. Cranach appeared almost out of nowhere around 1501 in Vienna. (There is nothing by him known before this, although he was already 30.) In 1505 he settled in Wittenberg, where he was to become court painter under three successive rulers of Saxony, and a prominent citizen. He designed crests, court dress and murals for Saxon palaces and hunting lodges. In addition to his painting production line, he owned a book-printing business, a pharmacy and a wineshop.

The crossing gallery contains the fabulous painting ‘Cardinal Albrecht of Brandenburg as St Jerome in His Study’ (1526), a bizarre picture which mismatches Renaissance clarity with medieval storytelling. On the other side of the screen on which it’s hung is the far more beguiling ‘Adam and Eve’ from the Courtauld. Half of this gallery is devoted to portraits, including the well-known one of Luther from Bristol, and a trio of heads — a watercolour of a peasant, with studies of a clean-shaven and a bearded man — which will please students of human nature. The last room is divided between a very fine row of nudes down the left wall, and more complex figure compositions down the right, with a portrait of Cranach himself (by his son, Lucas the Younger) glowering between.

Although lavishly illustrated, the catalogue is vast and unwieldy (£24.95 in paperback) and will no doubt languish unread on coffee tables throughout the land. A publication about a third of the size would be much more user-friendly and a really welcome addition to any art lover’s library.