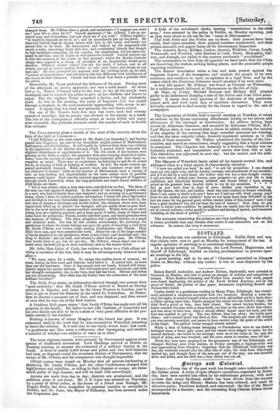 The Annuity-tax war continues in Edinburgh. Baillie Stott and ano- ther citizen were sent to gaol on Monday for nonpayment of the tax. A regular agitation of meetings is to commence immediately. At a special meeting on Tuesday, the Lord Provost, Magistrates, and Sheriff of Edinburgh, decided on issuing proclamations to prevent open- air meetings in the city.

A great meeting, said to be one of " Chartists," assembled on Glasgow Green on Monday, without any notice: it was at once dispersed by the police.

Clarke, butler to a gentleman residing in Moray Place, Edinburgh, has victori- ously sustained a desperate encounter with two burglars. Hearing a noise du- ring the night, he armed himself with a sword-stick and sallied out by a back-door; a robber sprang upon him; Clarke plunged the sword into the fellow's thigh; the thief fired a pistol at him; then both closed. The sword having broken, the butler assailed the man with a clasp-knife, cut him on the arm, threw him down; and was about to bind him, when a second robber leaped upon his back, and the first was enabled to get up. The two fellows then ran away; the butler gave chase; and a second pistol was fired at him. The burglars got clear off, though one was severely wounded, and seems to have carried away the point of the sword in his thigh. The gallant butler escaped almost unhurt.

While a fleet of fishing-boats belonging to Portnahaven were at sea about a fortnight since, a fierce gale arose, and the vessels were obliged to make for the nearest harbour; one failed in the attempt, went on to the rocks at On, near the island of Islay, and was wrecked; and the crew, seven in number, were all lost. While five men were employed on the permanent way of the Edinburgh and Glasgow Railway near Croy station, on Friday sennight, a luggage-train was seen approaching from Glasgow; forgetting that the Edinburgh mail-train was due, the workmed crossed over the other line of rails; the train from Edinburgh dashed up; and though three of the men got out of the way, one was knocked down and killed, and the fifth lost a foot, which was, cut off.