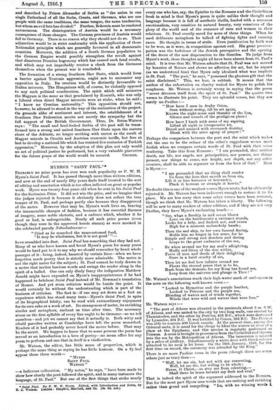 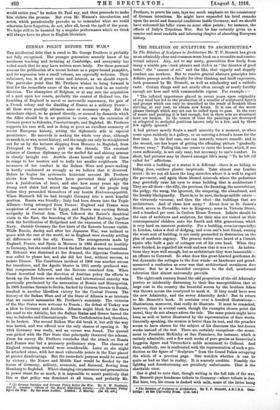 MYERS'S " SAINT PAUL."* PROBABLY no prize poem has ever

won such popularity as F. W. It Myers's Saint Paul. It has passed through more than sixteen editions, and now at the end of nearly fifty years finds itself treated to the sort

Of editing and annotation which is too often inflicted on great or popular work. Myers was twenty-four years old when he sent in his Saint Paul for the Seatonian Prize. It did not win the prize, and we imagine that the judges rejected it because it obviously does not reflect the true temper of St. Paul, and perhaps partly also because they disapproved of the metro. However that may be, Myers's work lives on, braving

the innumerable changes of fashion, because it has essential fineness of imagery, some noble rhetoric, and a cadence which, whether it be

good or bad, is unforgettable. Nearly all such prize poems (even though they were in the approved heroic: stanza) as were mocked in the celebrated parody Nebuchadnezzar-

" Cried as he munched the unaccustomed food, It may be wholesome, but it is not good' "- have crumbled into dust. Saint Paul has something that they had not. Many of us who have known and loved Myers's poem for many years would be hard put to it to say why we should remember by heart whole passages of it—being, indeed, haunted by certain lines—when we have forgotten much poetry that is strictly more admirable. The metre is not the right metre for the subject ; St. Paul cannot be truly drawn in a metre that invites luscious words and swings the reader along in the spirit of a ballad. One can only dimly fancy the indignation Matthew Arnold might have expended on Myers's inappropriateness if he had happened to belabour Saint Paul instead of Mr. Newman's translation of Homer. And yet stern criticism would bo beside the point. It would certainly be without the understanding which is part of the business of criticism. The fact is—if one may set down as a fact an experience which has stood many tests—Myers's Saint Paul, in spite of its biographical falsity, can be read with extraordinary enjoyment for its own sake as a work of art. Its strangeness of metre, its ravishing similes and metaphors, enchant us time after time. The necessary stress on the first syllable of every line ought to be tiresome—so we tell ourselves—and yet we cannot say that it actually is. Both witty and ribald parodies written at Cambridge have left the poem unscathed. Readers of it had probably never heard the metre before. That may be the secret. We happen to know that to some persons the poem has served as an introduction to a love of poetry—no mean office for any poem to perform and one that in itself is a vindication.

Mr. Watson, the editor, has little sense of proportion, which is perhaps the same thing as saying he has little humour. On a fly-leaf appear these three words- "MYERS SAINT PAUL WATSON "

—a ludicrous collocation. " My notes," he says, " have been made to show how closely the poet followed the spirit, and in many instances the

language, of St. Paul." But one of the first things that strike nearly

• Saint Paul. By F. W. A. Myers. FAited, with Introduction and Nabs, by

every one who has, say, the Epistles to the Romans and the Corinthians fresh in mind is that Myers's poem is quite unlike their thought and language because it is full of aesthetic, thrills, loaded with a sensuous emotionalism, very sensitive to natural beauty, very conscious of tho glory of the world and of the romance of men and women in their relations. St. Paul overtly cared for none of these things. When he used deliberate metaphors he talked of fighting fights and running races. He thought in terms of strife. Even justification by faith was to be won, as it were, in competition against evil. His great preoccu- pation was the forfeiture of the Jewish prerogative and the opening of the doors of the new dispensation to the Gentiles. To judge from Myers's work, these thoughts might all have been absent from St. Paul's mind. It is true that Mr. Watson admits that St. Paul was not moved by beauties of Nature and shows no affection for art, but he argues (as we understand him) that Myers only idealized what was implicit in St. Paul. "The poet," he says, " possessed the glorious gift that the saint disclaimed." This, we fear, is rubbish. It means that the author of the exhortation on charity waited for Myers to polish his roughness. Mr. Watson is certainly wrong in saying that the poem " never divorces itself from the spirit of St. Paul." He quotes two verses to illustrate his point. They are splendid verses, but they are surely un-Paurme :- " How have I seen in Araby Orion, Seen without seeing, till he set again, Known the night-noise and thunder of the lion, Silence and sounds of the prodigious plaint How have I knelt with arms of my aspiring Lifted all night in irresponsive air, Dazed and amazed with overmuch desiring Blank with the utter agony' of prayer ! "

Perhaps the comparison between the poet and the saint which malts out the one to be the refiner of the other's ruggedness seems moss foolish when we compare certain words of St. Paul with their verse rendering. Take this from Romans : " I am persuaded, that neither death, nor life, nor angels, nor principalities, nor powers, nor things present, nor things to come, nor height, nor depth, nor any other creature, shall be able to separate us from the love of God." Here is Myers :— " I am persuaded that no thing shall sunder Us from the love that sa veth us from sin, Lift it or lose hereover or hereunder, Pluck it hereout or strangle it herein."

No doubt this is ono of the weakest verses Myers wrote, but he ultimately rejected it. Mr. Watson has been indiscreet enough to restore it to its place. We are less sorry that some other verses have been restored, though we think that Mr. Watson has taken a liberty. Tho following will be new to many readers of other editions, and if they are not very Pauline, they have Myers's enchanting touch :- " See, when a fireship in mid ocean blazes Lone on the battlements a swimmer stands, Looks for a help, and findeth not, and raises High for a moment melancholy hands ; Then the sad ship, to her own funeral flaring, Holds him no longer in her arms, for he Simple and strong and desolate and daring Leaps to the groat embraces of the sea, So when around me for my soul's affrighting, Madly red-litten of the woo within,

Faces of men and-deeds of their delighting Stare in a lurid cruelty of sin,

Then let me feel how infinite around mo Floats the eternal peace that is to be, Rush from the demons, for my King has found me, Leap from the universe and plunge in Thee ! "

Mr. Watson's annotations reach their high-water mark of uselessness in the note on the following well-known verse:—

" The port of Athens was situated in the peninsula about 5 tn. S.W. of Athens, and was united to the city by two long walls, one erected by Themistocles, and the other by Pericles, 456 B.C., which were destroyed by Lysander, 404 B.C. It was fortified by Conon, 393 B.C. The Peirteus was able to contain 400 Greek vessels. At the present time, among tho Oriental sects, it is usual for the clergy to bless the waters or river of a place at the Epiphany, and this service is regaledy performed at Peirteus. A cross is brought in procession from the Cathedral and thrown into the sea by the Metropolitan of Athens. The immersion is saluted by a salvo of artillery. Simultaneously a white dove with Greek colours attached to its neck is let loose. On the 19th January, 1916, for the first time on record, the ceremony was attended by the King.'

There is no more Pauline verse in the poem (though thero are some others just as true) than :—

" Well, let me sin, but not with my consenting, Well, let me die, but willing to be whole : Never, 0 Christ,—so stay me from relenting,—

Shall there be truce betwixt my flesh and soul."

That is indeed the spirit of the argument addressed to the Romans. But for the most part Myers uses words that are enticing and ravishing

rather than grand and compelling. " Lo, with no winning words L

would entice you," he makes St. Paul say, and then proceeds to make him violate the promise. But even Mr. Watson's introduction and notes, which paradoxically provoke us to remember what we could otherwise have forgotten, do not, after au, break the spell of the poem. We hope still to be haunted by a singular performance which we think will always have its place in English literature.