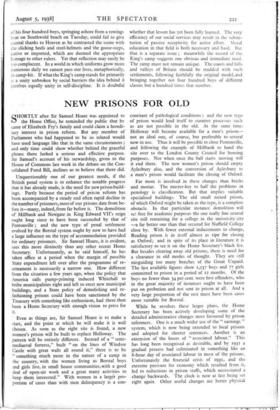 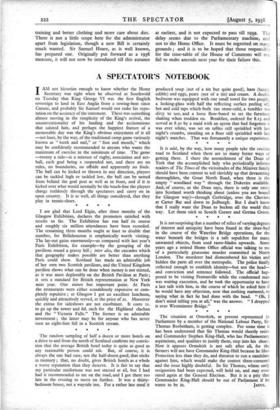 SHORTLY after Sir Samuel Hoare was appointed to the Home Office, he reminded the public that he came of Elizabeth Fry's family and could claim a heredi- tary interest in prison reform. But any member of Parliament who had happened to be so related would have used language like that in the same circumstances ; and only time could show whether behind the graceful phrase there lurked a serious and effective purpose. Sir Samuel's account of his stewardship, given to the House of Commons last week in the debate on the Con- solidated Fund Bill, inclines us to believe that there did.

Unquestionably one of our greatest needs, if the British penal system is to enhance the notable progress that it has already made, is the need for new prison build- ings. - Partly because the period of prison reform has been accompanied by a steady and often rapid decline in the number of prisoners, most of our prisons date from be- fore it—many, indeed, from far before it. The demolition of Millbank and Negate in King Edward VII's reign ought long since to have been succeeded by that of Pentonville ; and the new type of penal settlement evolved by the Borstal system ought by now to have had a large influence on the type of accommodation provided for ordinary prisoners. Sir Samuel Hoare, it is evident, sees this more distinctly than any other recent Home Secretary: Unfortunately, as he said himself, he has taken office at a period when the margin of possible State expenditure left over after the programme of re- armament is necessarily a narrow one. How different from the situation a few years ago, when the policy that America calls pump-priming induced Whitehall to bribe municipalities right and left to erect new municipal buildings, and a State policy of demolishing and re- fashioning prisons could have been sanctioned by the Treasury with something like enthusiasm, had there then been a Home Secretary with enough vision to press for it.

Even as things are, Sir Samuel Hoare is to make a start, and the point at which he will make it is well chosen. As soon as the right site is found, a new women's prison will be built to replace Holloway. The pattern will be entirely different. Instead of a " semi- mediaeval fortress," built " on the lines of Windsor Castle with great walls all round it," there is to be " something much more in the nature of a camp in the country, with the women living as Borstal boys and girls live, in small house communities, with a good deal of open-air work and a great many activities to keep them interested?' With women in a larger pro- portion of cases thin with men delinquency is a con- comitant of pathological conditions ; and the new type of prison would lend itself to curative processes such as are not possible in the old. At the same time, Holloway will become available for a men's prison— not an ideal one, of course, but preferable to several now in use. Thus it will be possible to close Pentonville, and following the example of Millbank to hand the site over to the London County Council for housing purposes. Nor when once the ball starts moving will it end there. The new women's prison should empty Aylesbury also, and the conversion of Aylesbury to a men's prison would facilitate the closing of Oxford.

Far more is involved in these changes than bricks and mortar. The master-key to half the problems in penology is classification. But that implies suitable specialised buildings. The old small mixed prison, of which Oxford might be taken as the type, is a complete obstacle. In that particular instance demolition will set free for academic purposes the one really fine central site still remaining for a college in the university city —a far better one than that secured for Nuffield College close by. With fewer external inducements to change, Reading prison is in itself almost as ripe for closing as Oxford; and in spite of its place in literature it is satisfactory to see it on the Home Secretary's black list. But besides clearing away old prisons, there is need for a clearance in old modes of thought. They are still misguiding too many benches of the Great Unpaid. The last available figures show 1,237 boys and 77 girls committed to prison in a period of 12 months. Of the boys no fewer than 34 per cent. were first offenders, who in the great majority of instances ought to have been put on probation and not sent to prison at all. And a very large proportion of the rest must have been cases more suitable for Borstal.

While he revolves these larger plans, the Home Secretary has been actively developing some of the detailed administrative changes most favoured by prison reformers. One is a much wider use of the " earnings " system, which is now being extended to local prisons and adopted for shorter sentences. Another is an extension of the hours of " associated labour." This has long been recognised as desirable, and by 1931 a gradual process had culminated in something like an 8-hour day of associated labour in most of the prisons. Unfortunately the financial crisis of 1931, and the extreme pressure for economy which resulted from it, led to reductions in prison staffs, which necessitated a change backwards. The clock is now at last being set right again. Other useful changes are better physical training and better clothing and more care about diet. There is not a little scope here for the administrator apart from legislation, though a new Bill is certainly much wanted. Sir Samuel Hoare, as is well known, has prepared one. Originally put forward as a 1938 measure, it will not now be introduced till this autumn at earliest, and is not expected to pass till 1939. The delay seems due to the Parliamentary machine, and not to the Home Office. It must be regretted on marry grounds ; and it is to be hoped that those responsiblz for the time-table of the House of Commons will net fail to make amends next year for their failure this.