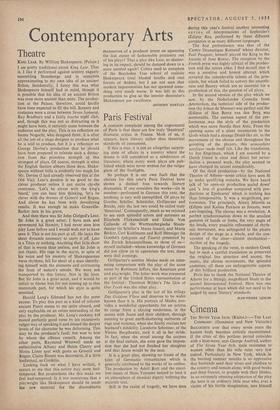 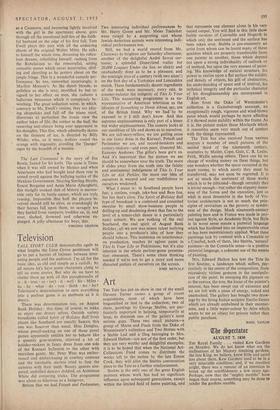 THE SEVEN YEAR ITCH. (Rialto.)—THE LAST COMMAND. (Dominion and New Victoria.) BioLocis-rs aver that every seven years the human body becomes entirely reconstituted. If the crisis of this perilous period coincides with a heat-wave, says George Axelrod, author of The Seven Year Itch, male resistance to women other than his wife rates very low indeed. Particularly in New York, which ,in the burning summer months is so oppressive that husbands send their wives and children to the country and remain alone, with good books and deep freezes, to grapple with their libidos. In an extremely amusing adaptation of the play the hero is an ordinary little man who, ever a victim of his fertile imagination, sees himself,

as a Casanova, and becoming lightly involved with the girl in the apartment above, goes through all the emotional hell-fire of the faith- ful husband on the edge of his first fall. Tom Ewell plays this part with all the endearing charm of the original Walter Mitty. He talks to himself the whole time, dreaming his ridicu- lous dreams, rebuilding himself, rushing from the Rabelaisian to the remorseful, setting romantic scenes which never materialise, chid- ing and chortling as he potters about on the jungle fringe. This is a wonderful comedy per- formance. So too, somewhat surprisingly, is Marilyn Monroe's. As the dumb blonde, as guileless as she is sexy, mystified by but re- signed to her effect on men, she radiates a ludicrous innocence which is completely be- witching. The great seduction scene, in which. contrary to Mr. Ewell's visions, they are play- ing chopsticks and fall off the piano stool, illustrates to perfection the ironic view the author takes of life, the canker in the bud, the recurring anti-climax being ever uppermost in his thoughts. This film, which admittedly skates on the thinnest of ice, is directed by Billy Wilder, who, as it were, waltzes round the orange with ingenuity, avoiding the 'Danger' signs by the breadth of a nuance.

The Last Command is the story of Jim Bowie, famed for his knife. The scene is Texas when it was still owned by Mexico and when Americans who had bought land there rose in armed revolt against the bullying tactics of the Mexican Government. Starring Sterling Haydn, Ernest Borgnine and Anna Marie Alberghetti, this stodgily cooked slab of history is memor- able only for its battle scenes, which are truly rousing. Impossible that half the players in- volved should still be alive, so crunchingly do their horses fall upon them, so savagely are they hurled from ramparts, trodden on, in, and over, slashed, drowned and otherwise ex- punged. A jolly afternoon for boys, this.