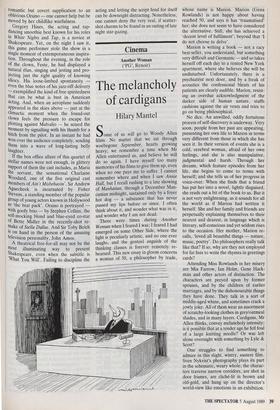 The melancholy of cardigans

Some of us will go to Woody Allen films. No matter that we sat through woebegone September, hearts growing heavy; we remember a time when Mr Allen entertained us, and believe he will do so again. I have myself too many memories of his films to give them up, even when no one pays me to suffer. I cannot remember where and when I saw Annie Hall, but I recall rushing to a late showing of Manhattan, through a December Man- cunian midnight, sustained only by a foyer hot dog — a substance that has never passed my lips before or since. I often think about it, and wonder what was in it, and wonder why I am not dead. There were times during Another Woman when I feared I was; I feared I had emerged on some Other Side, where the light is peculiarly artistic, and no one ever laughs, and the genteel anguish of the thinking classes is forever remotely re- hearsed. This new essay in gloom concerns a woman of 50, a philosopher by trade,

whose name is Marion. Marion (Gena Rowlands) is not happy about having reached 50, and says it has 'traumatised' her; she does not seem to have considered the alternative. Still, she has achieved a `decent level of fulfilment'; beyond that do not choose to delve'.

Marion is writing a book — not a racy best-seller, you understand, but something very difficult and Germanic— and so takes herself off each day to a rented New York apartment, where she believes she will be undisturbed. Unfortunately, there is a psychiatrist next door, and by a freak of acoustics the confessional bleats of his patients are clearly audible. Marion, resist- ing an overdue acknowledgment of the darker side of human nature, stuffs cushions against the air vents and tries to go on being philosophical.

No dice. An unwilled, oddly fortuitous process of self-discovery is underway. Very soon, people from her past are appearing, presenting her own life to Marion in terms very different from those in which she has seen it. In their version of events she is a cold, cerebral woman, afraid of her own feelings, and she is also manipulative, judgmental and harsh. Through her dreams, which feature episodes from her life, she begins to come to terms with herself; and she tells us of her progress in voice-over. When she finds that a friend has put her into a novel, lightly disguised, she reads out a bit of the book to us. But it is not very enlightening, as it sounds for all the world as if Marion had written it herself. She and her family and friends are perpetually explaining themselves to their nearest and dearest, in language which is literary, self-conscious and yet seldom rises to the occasion. Her mother, Marion re- calls, 'loved all beautiful things — nature, music, poetry'. Do philosophers really talk like that? If so, why are they not employed for fat fees to write the rhymes in greetings cards?

Attending Miss Rowlands in her misery are Mia Farrow, Ian Holm, Gene Hack- man and other actors of distinction. The characters are preyed upon by former spouses, and by the children of earlier marriages, and by the dishonourable things they have done. They talk in a sort of middle-aged whine, and sometimes crack a jowly joke. All of them wear an assortment of scratchy-looking clothes in grey/oatmeal shades, and in many layers. Cardigans, Mr Allen thinks, convey melancholy intensity; is it possible that at a tender age he fell foul of a large knitting needle? Or was left alone overnight with something by Lyle & Scott?

One struggles to find something to admire in this slight, wintry, austere film. Sven Nykvist's photography plays its part in the schematic, weary whole; the charac- ters traverse narrow corridors, are shot in door frames, are cliché-lit in brown and old-gold, and hung up on the director's world-view like emotions in an exhibition.