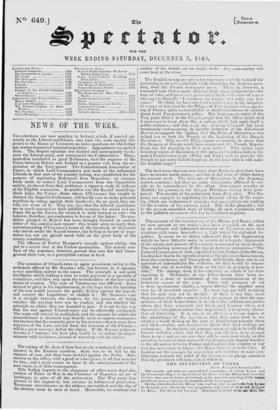 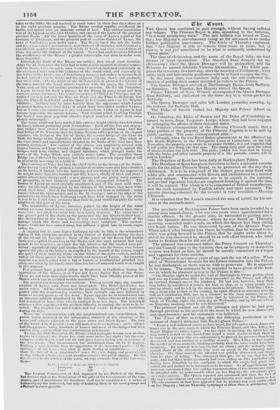 Page 1, 5 December 1840 — The account of the inundations of the Rhone and Saone,
Close

The account of the inundations of the Rhone and Saone,

which we now present to our readers, has been compiled on the spot by an eminent and influential merchant of Lyons—a man who combines with warm benevolence a 11:gh talent for statistical in- quiries. It seems to us better calculated than the fragmentary details we have hitherto seen, to convey an adequate impression of the nature and amount of the misery occasioned by these floods. The concluding sentence of the report deserves attention—" The Central Commission of Aids, organized by the Prefect of the Rhone, has decided that ill the apportionment of the gifts from Government, from the communes, and from private individuals, there can be no question of indemnifying the sufferers. for that would be impos- sible, but only of assisting them as thr and as promptly as pos- sible." The damage done is too extensive to admit of the state repairing it. Multitudes of our fellow-beings have been re- duced to a state of destitution at the commencement of the inclement season of the year. Their only prospect of aid is front spontaneous charity, a source whence the supplies must ever be of uncertain tumult. No man can say with certainty that his mite may not be needed. If there is any time more than another when the warm-hearted are prompt to obey the sug- gestions of their benevolence, it is Nvbeu the sufferers are parties whom they have esteemed and loved, and between whom and thcinselvea misapprehensions have engendered a temporary aliena- tion of friendship. It is almast an alleviation to our regret at the misfortunes of the Lyonnese, that they must tend to re- awaken a kindly feeling on the part of Englishmen towards them and their country, and because we know that kind feelings are contagious. At any time, our countrymen need only to be told that human suffering exists and that they can alleviate it, to prompt them to net ; and we are sure they will be even more ready on this occasion, because it may supersede tile disagreeable inquiry whether in the alienation between France and Eneduel that country or our own has been more to blame—for blame there is on both sides. If London set the example by organizing a Committee to raise con- tributions towards the relief of the 1..oinisse, we pledge ourselves that the provinces will immediately follow it. THE INUNDATION OF LYONS.

The terrible and hitherto nparalleled inundation of which Lyons and time towns aml villages on the blnks of the S:lolle and the Rhone have been the victims, may now be better understood, as the probable subsiding of the tratt.ta permits us more co:01,1.1,1y to comprehend the consequences.

On the .2.9th October the Rhone wits 5ha11w ; the stemn-boato from Lyons to Avignon were awe to ply Ina wregullerls, and none of Uteri). left Avesuou for Arks. The Saune wro 'tranquil. Abundant rains fell from 41sel6tlrOs.

tober to the 30th; the soil received as much water in these four days alone as in the eight previous months. The Rhone swelled rapidly, overflowed ite banks, and spread over an immense extent of land. This sudden inundation vas at its highest on the 31st October, and exceeded the limits of the greatest previous floods. All the lower quarters of the town of Lyons, a part of the common of Brot teaux, and the greatest part of tmother district cif Lyons, the town of GuillotiZle, Avcre under water, The Rhone burst through the banks and dams constructed to contain it, overwhelmed all obstacles, and destroyed a considerable number of houses built chiefly of brick, and even sena: of those of stone fell under the violence of the waters. Never had such disasters followed the overilowings of the Rhone : a greater catastrophe was soon to make even these Jingo t ten.

Although the floods of the Rhone are sudden, they are of short duration. Alter the 2d Novi:miler the river had in some degree resumed its former course; but the Saone, hitherto quiet, soon la came dist ti rbed, increased excessively by the contintud tains under the influence of the :South wind, and especially by the influx of the Boobs, one of its tributary streams, and rushed in its turn from

its bed, carried an its banks and the adjacent 01 jects, slowly laid gradually

but int si-tibly. On the night of the fld Noveniter, it entered the interior of the town, covered the timer streets together with the quays, the district of Vaise, and, sw, lien and furious, continued to im rease. On the 4th November, it began to three for itself a passage to the Rhone by many broad and deep currents ecross the town. The water eneompas:it (I Motel de II:nrope, and in- undated entirely not only the Rue du Perm MA the Place (le lid 5(0(11, but also the Place (le ht Chariti. and the (imi de la Charit6, and even the 31flitaire. Nothing can be more terrible than the appearance which Lyons presented during these fatal days: it might have been called another Venice ; but at Venice effinniunication is easy and convenient, whilst at Lyons it had become impossible for various reasons. Vast streams rolled headlong through the busiest and most populous streets; a great numba of shops were com. pletely submerged. The Saone could not have readied this extreme height (thirty-two feet above its level) without producing great devastations. Even all the iron and suspen- sion bridges were carried away successively, amidst dreadful noise ; first the foot-bridge of St. Vincent, then the bridge Seguin, with a portion of its elegant columns, the bridge of the Isle of Barbe, the wooden bridge of the Cour du lSlidi,tlie bridge of the Mulatii:re, which i8 a wood and stone. The whole of the wine•stores and manufactories situated on the banks of the river have been entirely destroyed. The surface of the stream was constantly covered with beams, barrels, and huge wrecks of coal-ships, which had struck against the bridges, with beds, cradles, and elegant furniture, which plunged under the arches of the bridge Tilsit, now entirely under water. The so-called Stone Bridge has withstood the torrent, but has received so much injury that it will be abs.ohitely necessary to rebuild it. The faubourg of Vaise has been the chief victim to the ravages of the Saone. After having razed to the ground a number of country-seats and farms situated on its banks, it rushed into the faubourg, and overturned with the impetus of its weight more than two hundred and fifty houses, chiefly of brick and stone : entire streets have disappeared ; a new quarter, and one giving every promise of prosperity, is now suddenly ruined by this unexpected calamity. The

houses of Lyons are most carefully constructed, and of the most solid mate- rials; for although endangered by the violence of the waters, they have with- stood their farce. But in the faulmurgs we have not been so fortunate : many Louses fell at the Quarantaine and in the St. George ; and as the sides of the mountains on which these faubourgs recede have been changed by the rains, at was to he fe%red SWIM moments that their decent would complete the anni- hilation of this part of the town. The inhabitants of Lyons, however, guided by the height of the water during previous inundations, contented themselves with elevating their stores

some feet : the greater number have been fatally deceived. The water rose in

the greater part of the shafts on the quays and the low streets to their tops : the destruction of the wares, also, is very considerable, independent of the

damage which the floors and wainseotings have sustained. The custom- house, which has beea carried away, Las suffered a great loss in cocoa, sugar, coffee, d.c.

A singular but in some degree burlesque episode to this, is the miraculous taking of fish which has occurred in the district of Perrache during the days of the 3d and 4th November. Sonic of the ponds of the Bresse had broken forth and emptied themselves in the Saone, and the same accident had hap- pened to the reservoirs in which the fish intended for the market were pre- served: myriads of carps and tenches fell therefore into the Saone, were beaten against the piles of the bridges, or,stupified by the tumult of the waters, sought the quiet 01 their ordirary abode on the banks of the river—which, unfortu- nately for them, proved to be the streets and squares of Lyons. An immense number It a., taken either with a hat or basket, or handkerchief attached to is stick, am: often by the hand; snore than live tons of carp and tench were caught in this manner.

Few persons have perished either at Brotteaux or Guillotii.,re during the inundation of the Rhone, or at Value and Lyons during that of the Saone. There are not more than eight deaths which have been officially proved at the Mairie which can be ascribed to this inundation.

The general consternation was extreme. During several days the commu- nication of Lyons with Paris was interrupted. The Ihitel des Postes was under water. All the inhabitants of the populous faubourg of Vaisc had emi-

grated into the neighbouring country ; their example was soon followed by those ot several quarters of the town. Lyons appears to be. transformed into an immease solitude abandoned to the waters. Other citizens of Lyons, who had rcin.tined at home were closely confined there ten days. The municipal adminis:ration experienced the greatest difficulty in causing the dead to be in- terred. The holtital wits under water, and was unable to dispense medicines during six days.

W hen t he (wont ii Mention with the neighbourhood was reistablished, the public terror increased at the intarmation obtained of the situation a the

towns and sit ages adjacent to the river above anti below Lyons. The fury of the waters had, if pos,ible, been still more disastrous to them : entire villages had disappeared; ttuariy hundreds of houses and most of the bridges hind been carried away ; everywhere was consternation and misery.

To•day, the Ifni; November, the Rhone, which had again become very swollen, begins to d crease ; the Snouts lint sunk some inches last night ; Wit the con- tistuance ot the South wind and the rain gives reason to hair a fre..11 increase of

the two rs ere. The thermometer has maintained from 16 to is degrees. Nothing is ))))) rt: horrible than the appearance of the devastated portion; of the fauboor;:l 01 the town ; ii ii what is snore worthy of considerutio.: i.ity than the late of their inhabitants ? some tlatS telo happy and peaceint, and to-day without a home, and with no other resource but puidie charity. Besides the dotaster in the interior of the town, we may estimate that of the fitubourgs thus— lit Spoil MCC If, Own: are 1510 11011.W:4 dvatroyed. „ 111,11v1,1X ,,

The Central Corotoitodon of Aid, organized by the Prefect of the Rhone, has decided that in the distribution of the gifts of the Government, of the com- munes, and of individuals, the donation's shall not be conaidered us it means of indemnifying the distressed, but only of misting them in the moist prompt find atfeetual manner possible.