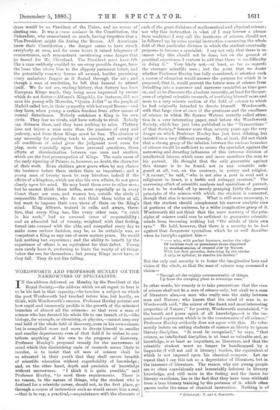 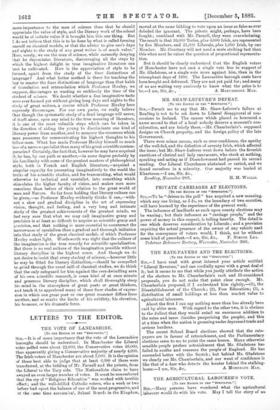 Page 11, 5 December 1885 — WORDSWORTH AND PROFESSOR HUXLEY ON THE NARROWNESS OF SPECIALISTS.
Close

WORDSWORTH AND PROFESSOR HUXLEY ON THE NARROWNESS OF SPECIALISTS.

IN theaddress delivered on Monday by the President of the Royal Society,—the address which we all regret to hear is to be his last in that capacity,—he touches a subject on which the poet Wordsworth had touched before him, but hardly, we think, with Wordsworth's success. Professor Huxley pointed out how rapid and immensely prolific is the growth of the minutest branches of almost all the sciences ; so that even a man of scienoawho has devoted his whole life to one branch of it—like biology, for example, or chemistry, or physics,--cannot keep any real hold of the whole field of discovery, even in his own science, but is compelled more and more to devote himself to smaller and smaller departments even of that field if he wishes to con- tribute anything of his own to the progress of discovery. Professor Huxley's proposed remedy for the narrowness of. mind which this diminishing scale of research seems likely to involve, is to insist that all men of science shall be so educated in their youth that they shall secure breadth of scientific education without superficiality of knowledge ; and, on the other hand, depth and precision of knowledge without narrowness. "I think it is quite possible," said Professor Huxley, "to meet these requirements. There is no reason, in the nature of things, why the student who is destined for a scientific career, shoulsi not, in, the first place, go through a course of instruction such OA would secure him areal, —that is to say, a practical,—acquaintance with the elements of

each of the great divisions of mathematical and physical science; nor why this instruction in what (if I may borrow a phrase- from medicine) I may call the institutes of science, should not be 'followed up by some special instruction concerning the whole field of -that particular division in which the student eventually- proposes to become a specialist. I say not only that there is no reason why this should not be done, but on the ground of practical experience, I verdure to add that there is no difficulty in doing it" Very likely not,—at least, so far as regards the stronger scientific men ; but the point that we doubt whether Professor Huxley has fully considered, is whether such a course of education would answer the purpose for which it is proposed, that is, would prevent the future man of science from dwindling into a narrower and narrower specialist as time goes on, and as he discovers the absolute necessity, at least for the pur- pose of-original scientific research, of confining himself more and

more to a very minute section of the field of science to which he had originally intended to devote himself. Wordsworth, with that large view at once of the greatness-and the smallness- of science to which Mr. Spence Watson recently called atten- tion in a very interesting paper, read before the Wordsworth Society, which has just been published in the " Transactions " of that Society;*.foresaw more than seventy years ago the very danger on which Professor Huxley has just been dilating, but insisted on a very different remedy. He, at least, did not think that a strong grasp of the relation between the various branches of science would be sufficient to secure the specialist against the narrowing and dwarfing influences of this extreme division of

intellectual labour, which more and more sacrifices the man to his pursuit. He thought that the only guarantee against this danger is to be found, not in any scientific safe- guard at all, bet, on the contrary, in poetry and religion. "A savant," he said, "who is not also a poet in soul and a religionist in heart, is a feeble and unhappy creature." The narrowing effect of scientific analysis and specialism of pursuit, is-not to be warded off by merely grasping fairly the general principles of the science with which the student is connected, though that also is necessary. What is still more necessary, is that the student should complement his narrow analytic view of portions of the universe, by a wider imaginative grasp of it. Wordsworth did not think that the mere mastery of the prin- ciples of science could ever be sufficient to guarantee scientific minds from becoming nothing but "the minds of their own eyes." He held, however, that there is a security to be had against that dangerous specialism which he so well describes when he inveighs against him-

" — who, with pocket hammer, smites the edge Of luckless rock or prominent stone disguised In weather-stains, or crusted o'er by Nature With her first growths, detaching by the stroke A chip or splinter, to resolve his doubts."

But the only real security is to foster the imaginative love and vision of the whole, so that the man of science may command a vision-

" Through all the mighty commonwealth of things, Up from the creeping plant to sovereign man.'

In other words, his remedy is to take precautions that the man of science shall not be a man of science only, but shall be a man of literature also,—a man who really sees the unity between man and Nature; who knows that the mind of man is, as Wordsworth said, "the mirror of the finest and most interesting properties of Nature ;" for poetry, Wordsworth maintained, "is the breath and purer spirit of all knowledge,—it is the im- passioned expression which is in the countenance of all science." Professor Huxley evidently does not agree with this. He vehe- mently insists on setting students of science at liberty to ignore literary discipline. "It must be recognised," he says, "that science, as intellectual discipline, is at least as valuable and, as knowledge, is at least as important, as literature, and that the scientific student must no longer be handicapped by a linguistic (I will not call it literary) burden, the equivalentof which is not imposed upon his classical compeer. Let me repeat that I say this mot as a depreciator of literature, but in the interests of literature. The reason why our young people are so often scandalously and lamentably deficient in literary knowledge, and still more in the feeling and the desire for literary excellence, lies in the fact that they have been withheld from a. true literary training by the pretence of it, which often passes under the name of classical instruction. Nothing is of

more importance to the man of science than that he should appreciate the value of style, and the literary work of the school would be of infinite value if it brought him this one thing. But I do not believe that this is to be done by what is called forming oneself on classical models, or that the advice to give one's days and nights to the study of any great writer is of much value." Here, surely, we see the man of science, while earnestly denying that he depreciates literature, discouraging all the steps by which the highest delight in true imaginative literature can best be cultivated. How is the appreciation of style to be formed, apart from the study of the finer distinctions of language ? And what better method is there for teaching the boy to master the finer distinctions of language than that habit of translation and retranslation which Professor Huxley, we suppose, discourages as wasting so recklessly the time of the student of science. We doubt whether a fine imaginative taste were ever formed yet without giving long days and nights to the study of great writers, a course which Professor Huxley here expressly discourages. For our own parts, we really believe that though the systematic study of a dead language will never, of itself alone, open any mind to the true meaning of literature, it is one of the most valuable steps which can be taken in the direction of aiding the young to discriminate one kind of literary power from another, and to measure the resources which man possesses for communicating his highest thoughts to his fellow-men. What has made Professor Huxley himself so much less of a narrow specialist than many of his great scientific contem- poraries ? Certainly, the fact that, however he may have acquired it, he has, by one path or another,—in some degree probably by his familiarity with some of the greatest masters of philosophical style, both in French and English literature,—acquired a singular capacity for presenting imaginatively to the world the fruits of his scientific studies, and for transmuting, what would otherwise be technical and specialist, into something which stimulates the higher faculty of vision, and makes men more conscious than before of their relation to the great world of man and Nature. So far from holding that literary culture can be given,—as Professor Huxley evidently thinks it can,—with- out a slow and gradual discipline in the art of expressing vision, thought, and feeling, and a very long and intimate study of the greatest achievements of the greatest minds, we feel very sure that what we may call imaginative grasp and precision is at least as difficult to acquire as scientific grasp and precision, and that nothing is more essential to counteract the narrowness of specialism than a gradual and thorough initiation into that study of the great classical models of which Professor Huxley makes light. Wordsworth was right that the culture of the imagination is the true remedy for scientific specialisation. But there is no real culture of the imagination possible without literary discipline in the highest sense. And though we do not desire to insist that every student of science,—however little he may be fitted for literary distinction,—should be compelled to grind through the usual mill of classical studies, we do think that the only safeguard for him against the ever-dwindling area of his own scientific research, is some kind of at once minute and generous literary discipline, which shall thoroughly steep his mind in the atmosphere of great poets or great thinkers, and teach it to apprehend many of those finer shades of expres- sion in which one great poet or one great reasoner differs from another, and so marks the limits of his subtlety, his elevation, his humour, or his dramatic force.