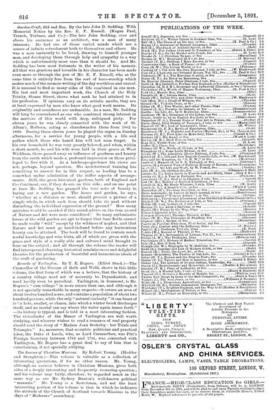 With Memorial Notice by the Rev. E. F. Russell. (Regan Paul, Trench, Trubner, and Co.)—The late John Sedding, over and above his eminence as an architect, was a man of many interests. He had one of those varied minds which are a source of infinite refreshment both to themselves and others. He was a man eminently to be loved, drawing to himself younger men, and developing them through help and sympathy in a way which is unfortunately more rare than it should be. And Mr. Sedding has been most fortunate in the writer of his memoir. All that was gracious and loveable in his character has been made even more so through the pen of Mr. E. F. Russell, who at the same time is entirely free from the sort of hero-worship which snakes much of the memoir-writing of the day worthless and unreal. It is unusual to find so many sides of life combined in one man. His last and most important work, the Church of the Holy Trinity, Sloane Street, shows what rank he had attained to in his profession. If opinions vary on its artistic merits, they are at least expressed by men who know what good work means. Its originality and soundness are undeniable. As a man, Mr. Sedding will long be remembered as one who combined strong interest in the matters of this world with deep, unfeigned piety. For eleven years ho was closely connected with the work of St. Alban's, Holborn, acting as churchwarden there from 1882 to 1889. During these eleven years he played the organ on Sunday afternoons, for a service for young people, with a life and pathos which those who heard him will not soon forget. In his own household he was very greatly beloved, and when, within a short month, he and his wife were laid in their grave at West Wickham, there passed away an influence of goodness and beauty from the earth which made a profound impression on those privi- leged to live with it. As a landscape-gardener his views are not, perhaps, beyond question. His architectural training has something to answer for in this respect, as leading him to a somewhat undue admiration of the stiffer aspects of arrange- snents. Still, the great historical gardens, both of England and the Continent, err, if they do err, on this side ; and on one point at least Mr. Sedding has grasped the true note of beauty in laying out a new garden. The house and garden, he says, ." whether at a distance or near, should present a picture of a simple whole, in which each item should take its part without disturbing the individual expression of the ground." How many mistakes would be avoided if this sound advice on the true accord of Nature and Art were more considered ! So many enthusiastic lovers of the wild garden are apt to forget that bare fields cannot be made really " wild except by the wildness of neglect, and that Nature and Art must go hand-in-hand before any harmonious beauty can be attained. The book will be found to contain much useful knowledge and wise hints, all of which are given with the grace and style of a really able and cultured mind brought to bear on the subject; and all through the volume the reader will find interspersed charming historical reminiscences and delightful theories for the production of beautiful and harmonious ideals of the craft of gardening.