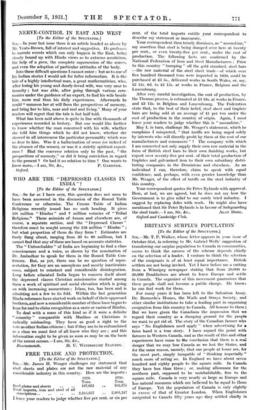 WHO ARE THE "DEPRESSED CLASSES IN INDIA "?

[To the Editor of the SPECTATOR.] SIR,—So far as I have seen, this question does not seem to have been answered in the discussion of the Round Table Conference or otherwise. The Census Table of Indian Religions recently issued has no such heading. It gives 238 million " Hindus " and 7 million votaries of " Tribal Religions." These animists of Assam and elsewhere are, of course, a separate section, and the " Depressed Classes " therefore must be sought among the 238 million " Hindus " ; but what proportion of them do they form ? Estimates are freely flung about, ranging front 30 to 80 millions, but I cannot find that any of these are based on accurate statistics.

The " Untouchables " of India are beginning to find a class consciousness and a voice, as shown by the nomination of Dr. Ambedkar to speak for them in the Round Table Con- ference. But, as yet, there can be no question of repre- sentation, for they are an amorphous and mostly inarticulate mass, .subject to constant and considerable disintegration. Long before educated India began to concern itself about the depressed classes Christian missionaries started among them a work of spiritual and social elevation which is going on with increasing momentum ; Islam, too, has been and is admitting not a few to its fold. Within the last generation Hindu reformers have started work on behalf of their oppressed brethren, and now a considerable number of these have begun to hope for and to claim recognition as a caste or castes of Hindus.

To deal with a mass of this kind as if it were a definite " minority " comparable with Muslims or Christians is radically misleading. They have as good a right to the vote as other Indian citizens ; but if they are to be enfranchised as a class we must first of all know who they are ; and this information ought to be given as soon as may be on the basis of the recent census.—I am, Sir, &c.,