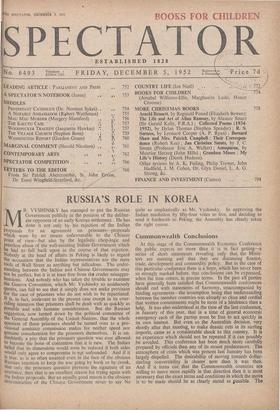 MR. VYSHINSKY has managed to put the Russian Government publicly in the position of the deliber- ate opponent of an early Korean settlement. He has done it not only by his rejection of the Indian Proposals for an agreement on prisoners—proposals Which were by no means unfavourable to the Chinese Point of view—but also by the legalistic chop-logic and Pointless abuse of the well-meaning Indian Government which he had to fall• back upon in the course of that rejection./ Nobody at the head of affairs in Peking is likely to regard the accusation that the Indian representatives are the mere tools of Wall Street as anything but ridiculous. The under- standing between the Indian and Chinese Governments may not be perfect, but it is at least free from the cruder misappre- hensions. And nobody who has taken the trouble to examine the Geneva Convention, which Mr. Vyshinsky so assiduously quotes, can fail to see that it simply does not make provision for the case of prisoners who do not wish to be repatriated. It is. in fact, irrelevant to the present case except in its over- riding intention that prisoners shall be dealt with as quickly as .Possible and with humane consideration. But the Russian suggestion, now turned down by the political committee of the General Assembly. of the United Nations, that the whole question of these prisoners should be turned over to a pro- visional armistice commission makes for neither speed nor genuine consideration for the prisoners themselves. It is un- doubtedly a pity that the prisoners question was ever allowed. to become the bone of contention that it is now. The Indian belief that its dimensions would soon be reduced if both sides would only agree to compromise is not unfounded. And if it IS true, as is so often asserted even in the face of the obvious Russian intention to keep the war going by hook or by crook, that only the prisoners question prevents the signature of an armistice. then that is an excellent reason for trying again with the Indian proposals. But an equally good reason is the obvious determination of the Chinese Government never to say No quite as emphatically as Mr. Vyshinsky. In approving the Indian resolution by fifty-four votes to five, and deciding to send it forthwith to Peking, the Assembly has clearly taken the right course.