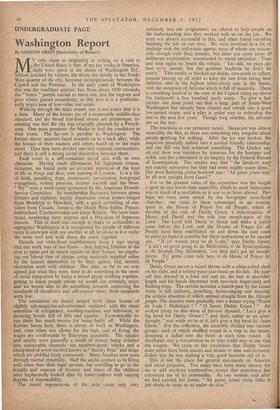 By GORDON GREEN (University of Bristol) MY only claim to originality in writing on a visit to i the United States is that, of my ten weeks in America, eight were spent in the slums of Washington D.C. Seldom touched by visitors, the slums are mostly in the.South- West quarter of the city, hemmed inconspicuously between the Capitol and the Potomac. In the early years of Washington this was the wealthier quarter, but, from about 1850 onwards, the " better " people started to move out, and the negroes and poor whites gained ascendency, so that now it is a predomin- antly negro area of low-value real estate. Walking through the main streets, one is not aware that it is a slum. Many of the houses are of a respectable middle-class standard, and the broad tree-lined streets are picturesque, re- minding one that the city was originally planned by a French- man. One must penetrate the blocks to find the conditions at their worst. The lay-out is peculiar to Washington. The former slaves' quarters faced inwards on to a back alley, while the houses of their masters and others faced on to the main street. Thus they were divided into two separate communities, and there is still a strong social distinction between them., Each court is a self-contained social unit with its own character. Having made allowances for legitimate roman- ticisation, we found quite an accurate portrayal of the kind of life in Porgy and Bess, now running in London. It is a life of drink, gambling, dope, promiscuity, prostitution, hot-gospel evangelism, violent passions, human warmth and the blues. " We " were a work-camp sponsored by the American Friends' Service Committee. Its membership fluctuated between about thirteen and eighteen, mostly Americans whose homes ranged from Brooklyn to Honolulu, with a good sprinkling of out- iders from Canada, Jamaica, the Dutch West Indies, France, witzerland, Czechoslovakia and Great Britain. We were inter- acial, numbering three negroes and a Hawaiian of Japanese escent. This in itself was enough to make us noticeable; in egregated Washington it is exceptional for people of different aces to associate with one another at all, let alone to live under e same roof and walk down the street together.

Outside our store-front establishment hung _a sign saying at our work was of two kinds— first, helping families in the ea to paint and do minor repairs on their houses, we supply- g our labour free of charge, using materials supplied either by the tenants themselves or by their agents, and, second, recreation work with children. Our aims, as far as we ever agreed just what they were, were to do something in the cause racial integration by being a mixed group working together, getting to know people whom we would not normally meet; d we hoped also to do something towards improving the andards of cleanliness and self-respect where those standards ere low.

The conditions we found ranged from clean homes of slightly sub-magazine-advertisement standard, with the usual amenities of refrigerator, washing-machine and television, to decaying hovels full of filth and squalor. Economically no Ione there has much excuse for being badly off. While the there Korean boom lasts, ere is plenty of work in Washington, and, even when one allows for the high cost of living, the wages are comfortable by European standards. The squalor and apathy were generally a result of money being diverted ' into undesirable channels—the numbers-game, whisky and a , cheap kind of wood-alcohol known as "Sneaky Pete," and drugs which are peddled fairly extensively. Many families were poor through marital instability. Half the adults seemed to be living with other than their legal spouses, but unwilling to go to the trouble and expense of divorce, and many of the children were haphazardly looked after by foster-parents with varying degrees of responsibility.

The moral regeneration of the area came only very indirectly into our programme; we offered to help people on the understanding that they worked with us on the Job. We were not always successful in this, and often found ourselves finishing the job on our own. We were involved in a lot of dealings with the real-estate agents, most of whom are reason- able enough with their tenants; but there are some cases of deliberate exploitation, accentuated by 'racial prejudice. Time and time again we heard the refrain, "Yes suh, we pays ahr rent ev'ry month, but dat goddam landlode he don't fix nutt'n." This results in blocked-up drains, cess-pools in cellars, parents staying up all night to keep the rats from biting their children, and in the highest tuberculosis rate in the States, with the exception of Arizona which is full of sanatoria. There is something ironical in the view of the Capitol rising up above the backyards a few hundred yards away. To give a fair picture one must point out that a large part of South-West Washington has already been cleared and rebuilt into a good low-rented estate, and a plan is under way to redevelop the rest in the next few years. Though long overdue, the reforms are on the way.

The reactions to our presence varied. Suspicion' was almost invariably the first, as there was something very irregular about people viorking for nothing. After the ice was broken, the suspicion generally melted into a natural friendly relationship, and one felt one had achieved something. The Quaker star on our door was mistaken by someone for the hammer and sickle, and this Culminated in an enquiry by the Federal Bureau of Investigation. The verdict was that the Quakers were • not exactly subversive but they had some mighty queer ideas." Our most flattering praise however was: "Ah guess youse mus' be all sent straight from Gawd."

For us the greatest value of the experience was the insight it gave us into lower-class negro-life, which to most Americans was as much of a revelation as it was to us from abroad. Per- haps we were most struck by the hot-gospel store-front churches ; our visits to them culminated in an evening spent in the House of Prayer for all People, which is devoted to the cult of Daddy Grace, a reincarnation of Moses and David and the sole true mouth-piece of the Lord. The Lord told David to dance and make a joyful noise before the Lord, and the Houses of Prayer for all People have been established up and down the east coast in order to make it possible for these instructions to be carried out. "If yo' wanna pray to de Lode," says Daddy Grace, "it ain't no good going to de Methodists, o' de Episcopalians, o' de Seventh Day Adventists, 'cos they ain't got nib mouth- pieces. Yo' gotta come raht here to de House of Prayer fo' all People."

Daddy Grace sat on a raised throne with a white-robed choir on his right, and a twenty-piece jazz-band on his left. He him- self was dressed in a loud suit and tie, his hair at shoulder- length and his hands decorated with two-inch finger-nails and flashing rings. The service included a march-past by the Grace Army in full uniform, preaching, hymn-singing and dancing, the ecstatic abandon of which seemed straight from the African jungle. The dancers went gradually into a trance crying "Praise de Lode ! Hallelujah ! ' "0 Sweet Daddy Grace ! " An acolyte rising on this wave of fervour shouted, "Let's give a big hand for Daddy Grace I " and then, rather as an after- thought, "and while we're at it, let's give a big hand fo' Jesus Christ." For the collection, the assembly divided into various groups, each of which shuffled round in a ring to the music, dropping a dollar into the bowl at each time round. It devetoped into a competition as to who could stay in the ring the longest. We came to the conclusion that Daddy Grace must either have been sincere and insane or sane and insincere. Either way he was making a very good business out 'of it.

This is not the place for general statements on America and racial prejudice. Too many have been made already for me to add anything constructive, except that experience has convinced me of its immorality. As one woman said after we had painted her house, " Ah guess, youse white folks is• jest abaht de same as us under de skin."