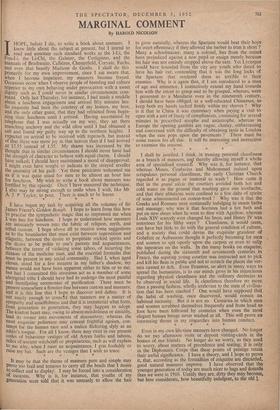 Even in my own life-time manners have changed. No longer do we pay afternoon visits or deposit visiting-cards at the houses of our friends. No longer do we worry, as they used to worry, about matters of precedence and seating; it is only in the Diplomatic Corps that these points of prestige retain their awful significance. I have a theory, and I hope to prove it, that, according as She formalities of etiquette are discarded, good natural manners improve. I have observed that the younger generation of today are much nicer to hags and dotards than we were in 1910. Untidy they are, dirty they may become, but how considerate, how beautifully indulgent, to the old