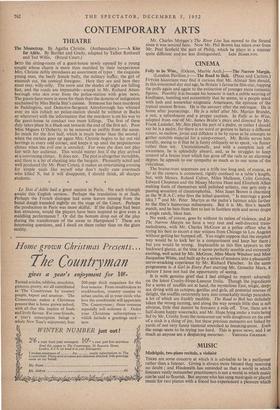 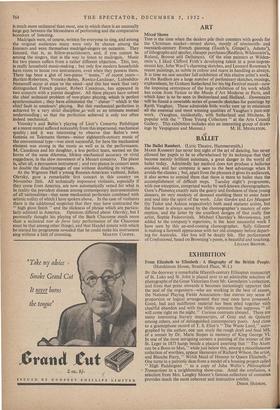 Madrigals, two-piano recitals, a violinist THERE are some concerts at which it is advisable to be a performer rather than a listener. Giving is always more blessed than receiving no doubt ; and Hindemith has reminded us that a world in which listeners vastly outnumber practitioners is not a world in which music can be said to flourish. But anyone who has sung madrigals or played music for two pianos with a friend has experienced a pleasure which Is much more unilateral than most, one in which there is an unusually large gap between the blessedness of performing and the comparative boredom of listening.

Madrigals were, of course, written for everyone to sing, and among the original audiences many were only by chance among the listeners and were themselves madrigal-singers on occasion. They listened, that is, as fellow-practitioners, and, if you cannot be among the singers, that is he way to listen to madrigals. Music for two pianos suffers from a rather different objection. This, too, is really household music-making ; but only few modern households have room to house two instruments, even when they possess them. There hiks been a glut of two-piano "teams," of recent years- Bartlett-Robertson, Vronsky-Babin, Rawicz-Landauer, Luboshiltz- Nemenoff occur at once to the mind—and this last week that very distinguished French pianist, Robert Casadesus, has appeared in two concerts with a pianist daughter. All these players have solved the chief technical problem of two-piano playing, which is perfect synchronisation ;_ they have eliminated the " clatter" which is the chief fault in amateurs' playing. But this mechanical perfection is achieved by a very strict discipline ,as -well as an intimate mutual understanding ; so that the perfection achieved is only too often indeed mechanical.

Vronsky's and Babin's playing of Liszt's Concerto Pathetique at a recent recital suffered noticeably from this impersonal, mechanical quality ; and it was interesting to observe that Babin's own fantasia on Telemann themes—minor eighteenth-century music of the conventional type—was most successful, for here the mechanical element was strong in the music as well as in the performance. M. Casadesus and his daughter, a less perfect team, seemed on the horns of the same dilemma, lifeless mechanical accuracy or vivid raggedness, in the slow movement of a Mozart concerto. The piano Is, after all, a percussion instrument ; and two pianos in consort seem to double the disadvantages of one without doubling its virtues.

At the Wigmore Hall a young Russian-American violinist, Julian Olevsky, gave a remarkable first concert in this country on November 26th. All technically impressive violinists, especially if they come from America, are now automatically vetted for what is hi reality the prevalent disease among contemporary instrumentalists of all nationalities—that same mechanical perfection combined with artistic nullity of which I have spoken above. In the case of violinists there is the additional suspicion that they may have contracted the "high gloss finish "and the slickness of phrase which are particu- larly admired in America. Opinions differed about Olevsky, but I personally, thought his playing of the Bach Chaconne much more than a technical tour de force (any performance of the Chaconne must be that among other things), and that Handel sonata with which he started his programme revealed that he could make his instrument