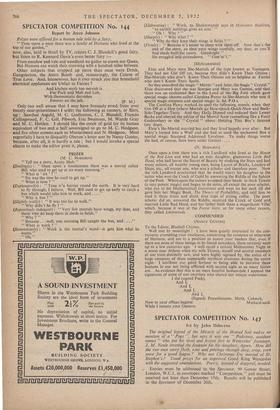 The original legend of the Miracle of the Heated Sod makes no mention of a" Page ", but says it was one " Podivintes, assiduus comes who put his tired and frozen feet in Wenceslas' footsteps. J. M. Neale invented the foumain for his daughter, Agnes. How did, the two men carry flesh, wine and pitielogs through deep, crisp, even snow for a good league ? Why not Christmas Eve instead of St. Stephen's? Usual, prizes for an improved Good King Wenceslas with the suggested emendations. Poetry, instead of doggerel, needed.

.. Entries must be addressed to the Spectator, 99 Gower Street, London, W.C.1, in envelopes marked "Competition," and must be received not later than December 15th. Results will be published in the -Spectator of December 26th.