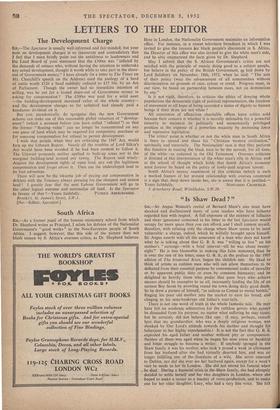 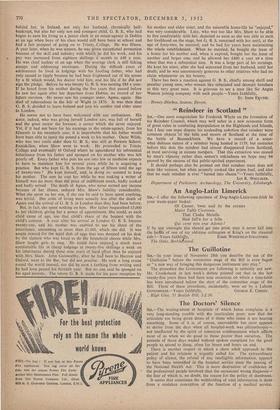 SIR,—Sir Angus Watson's recital of Bernard Shaw's sins must have shocked and disillusioned many of your readers who have hitherto regarded him with respect. A full exposure of the mixture of fallacies and sheer ignorance contained in his letter in the last Spectator would occupy far more space than you can afford, and I shall content myself, therefore, with refuting only the charge where Shaw seems to be most vulnerable: a charge, indeed, which he wilfully brought upon himself. Sir Angus asserts with all the assurance of a man who does not know what he is talking about that G. B. S. was "willing to live" on his mother's "earnings—with a brief interval—till he was about twenty- eight." He is less blameable in making this false statement than he is over the rest of his letter, since G. B. S., in the preface to the 1905 edition of The Irrational Knot, began the childish tale. He liked to think of artists as ruthless men who will not allow themselves to be deflected from their essential purpose by conventional codes of morality or by apparent public duty or even by common humanity; and he delighted to horrify those who prefer that -poor boys who achieve success should be examples to us all, incessantly leading the life of an earnest Boy Scout by prowling round the town doing daily good deeds. So he drew a picture of himself, "as callous as Comus to moral babble," flinging his poor old mother into the market to earn his bread, and clinging to his semi-bankrupt old father's coat-tails.

There is-not one word of truth in the whole fantastic tale. He may have felt an academic admiration for the ruthless genius who cannot be dissuaded from his purpose, no matter what suffering he may cause, but he certainly did not behave like one. (I may, perhaps, remark here that my grandmother, who was a deeply religious woman, was shocked by Our Lord's attitude towards his mother and thought his behaviour to her highly reprehensible.) It is not the fact that G. B. S. exploited his aged father and mother without pity or compunction. Neither of them was aged when he began his nine years of hardship and bitter struggle to become a writer. If anybody sponged in the Shaw family it was his mother, who took a pound a week in allowance from her husband after she had virtually deserted him, and was no longer fulfilling any of the functions of a wife. She never returned to Dublin, nor did she ever see her husband again, except for a week's visit he made to her in London. She did not attend his funeral when he died. During a financial crisis in the Shaw family, she had abruptly decided to settle herself and her two daughters in London,, where she hoped to make a career as a teacher of voice-production, and to make one for her elder daughter, Lucy, who had a very fine voice. She left

behind her, in Ireland, not only her husband, chronically half- bankrupt, but also her only son and youngest child, G. B. S., who had begun to earn his living as a junior clerk in an estate-agency in Dublin at an age when boys of his class would still have been at school and had a fair prospect of going on to Trinity College. He was fifteen. A year later, when he was sixteen, he was given exceptional promotion because of the skill and industry with which he did his work, and his pay was increased from eighteen shillings a month to £48 a year. He was chief 'cashier at an age when the average clerk is still licking stamps and addressing envelopes. During the difficult years of adolescence he lived in lodgings with his footling father, who had only ceased to tipple because he had been frightened out of his senses by a fit which would, his doctor told him, end his life if he did not sign the pledge. Before he was twenty G. B. S. was earning £84 a year. If he heard from his mother during the five years that passed before he saw her again after her departure from Dublin, no record of her letters survives. He never saw his younger sister, Agnes, again. She died of tuberculosis in the Isle of Wight in 1876. It was then that G. B. S. 'decided to leave Ireland and join his mother and elder sister in London.

He seems not to have been welcomed with any enthusiasm. His sister, indeed, who was giving herself London airs, was full of herself and the great career she foresaw, a career which she never enjoyed. Yet, if it had not been for his earnings in the estate-agency, from his fifteenth to his twentieth year, it is improbable that his father would have been able to remit the pound a week to his mother. Oscar Wilde, who was two years older than G. B. S., was still at Portora School, Enniskillen, when Shaw went to work. He proceeded to Trinity College and eventually to Oxford where he squandered his substantial inheritance from his father and sponged on his mother who was left poorly off. Every father who puts his son into law or medicine expects to have to maintain him for several years while he is acquiring a practice. But who kept G. B. S. from the age of fifteen until the age of twenty-two ? He kept himself, and, in doing so, assisted to keep his mother. The sum he cost her while he was making a writer of himself was no more than the price of indifferent meals, badly cooked and badly served. The death of Agnes, who never earned any income because of her illness, reduced Mrs. Shaw's liability considerably. What she spent on her son, if she can be said to have spent anything, was trivial. Her costs of living were actually less after the death of Agnes and the arrival of G. B. S. in London than they had been before.

But, in fact, she spent nothing on him. Her father bequeathed £5,000 to her children, giving her a power of appointment. She could, as each child came of age, use that child's share of the bequest with the child's consent. A year after his arrival in London G. B. S. became twenty-one, and his mother was enabled to use his share of the inheritance, amounting to more than £1,000, which she did. It was ample reward for the tepid dish of eggs that was dumped on his desk by the slattern who was hired to do the household chores while Mrs. Shaw taught girls to sing. He could have enjoyed a much more comfortable life in cheap lodgings at twenty-five shillings a week on his inheritance during those nine years of hard cffort than he enjoyed with Mrs. Shaw. John Galsworthy, after he had been to Harrow and Oxford, went to the Bar, but did not practise. He took a long cruise round the world instead, nor did he earn a farthing from writing until he had long passed his thirtieth year. But no one said he sponged on his aged parents. The. return G. B. S. made for his poor reception by his mother and elder sister, and the miserable home-life he "enjoyed," was very considerable. Lucy, who was too like Mrs. Shaw to be able to live comfortably with her, departed as soon as she was able to earn her livelihood on the stage, but G. B. S. remained with her until, at the age of forty-two, he married; and he had for years been maintaining the whole establishment. When he married, he bought the lease of a house for his mother and, when it expired, bought her the lease of another and larger one; and he allowed her £400 a year ato a time when that was a substantial sum. It was a large part of his earnings. He kept his sister, after she had separated from her husband, until her death; and he was uncommonly generous to other relatives who had no claim whatsoever on his bounty.

There has been a reaction against G. B. S., chiefly among shrill and peculiar young men, who scream like infuriated and decrepit banshees at this very great man. It is grievous to see a man like Sir Angus Watson joining company with such people.—Yours faithfully, ST. JOHN DIVINE. Honey .Ditches. Seaton, Devon.