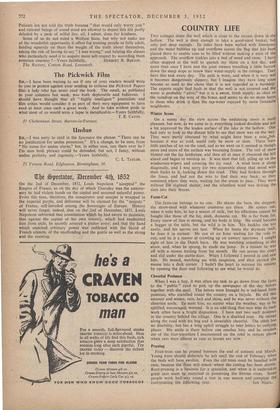 SIR,-1 have been waiting to see if any of your readers would write to you in protest against your sending to criticise the Pickwick Papers film a lady who has never read the book. The result, as published in your -columns last week, was both -deplorable and ludicrous. I should have thought that all "highly intel.ligent " journalists and film critics -would consider it as part of their very equipment to have read at least once such a .great work. And to take evident pride in what most of us would term a lapse is inexplicable.—Yours faithfully, T. E. CATON. 51 Cheltenham Street, Barrow-in-Furness.