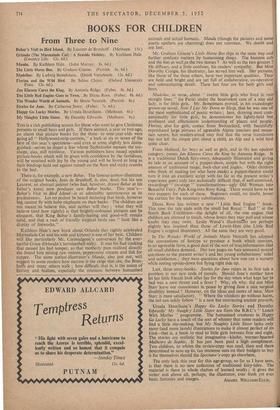 From Three to Nine -

Manda. By Kathleen Hale. (John Murray. 8s. 6d.) Press. 12s. ad.) Jan Klassen Cures the King. By Antonia Ridge. (Faber. 8s. 6d.) The Little Red Engine Goes to Town. By Diana Ross. (Faber. 8s. 6d.) The Wonder World of Animals. By Marie Neurath. (Parrish. 6s.) Stories for Jane. By Catherine Storr. (Faber. 7s. 6d.) Happy Go Lucky Stories. By Ursula Hourihane. (Methuen. 6s.) My Naughty Little Sister. By Dorothy Edwards. (Methuen. 6s.) THIS is a rich publishing season for those who want to give Christmas presents to small boys and girls. If there seemed, a year or two ago, an alarm that picture books for the three- to nine-year-olds were going all " Hollywood-strip-cartoon," a look at six or seven of the best of this year's specimens—and even at some slightly less distin- guished—serves to dispel a fear whose Technicolor menace the toy- shops, alas, still reinforce. Various publishers have issued opulent picture-books which will be given with confidence by the fastidious, will be received with joy by the young and will be loved as long as their bindings hold out against tumult on the floor and sticky crumbs in the bed.

There is, for example, a new Babar. The famous author-illustrator of the Oliginal books, Jean de Brunhoff, is, alas, dead, but his son Laurent, an abstract painter (who had, however, drawn Babar at his father's knee) now produces new Babar books. This year's- Babar's Visit to Bird Island—is as admirably spontaneous as its predecessors. Let no pedant be heard declaring that birds, however big, cannot fly with baby elephants on their backs. The children are not meant to believe this, and neither will they ; what they will believe (and how rightly) is that brightly-coloured pictures can be eloquent, that King Babar's family-feeling and good-will remain solid, and that a rush of friendly tropical birds can " look like a display of fireworks."

Kathleen Hale's new book about Orlando (her rightly celebrated Marmalade Cat and his wife and kittens) is one of her best. Children will like particularly Mr. Curmudgeon's conversion by the ever- tactful Grace (Orlando's tortoiseshell wife). It was his bad cooking that caused his bad temper, as that motherly puss realised directly she found him mixing raw onions, peppermint creams and fish for supper. The same author-illustrator's • Manda, also just out, will suggest to some readers how narrow is the ridge that she, the Brun- hoffs and many others walk ; how difficult, that is, is the union of fantasy and tealism, especially the relations between humanised animals and actual humans. Manda (though the pictures and some poetic epithets are charming) does not convince. We doubt and

Mr. Graham Greene's Little Horse Bus slips in the same way and further confuses matters by humanising things. The hansom cab and the bus as well as the two horses ? As well as the two grocers ? He diffuses, and a little confuses, his readers' sympathy. But Miss Dorothy Craigie, his illustrator, has served him well. Her pictures, like those of the three others, have two important qualities. They are bold and bright and are yet full of collaborative, co-operative and substantiating detail. These last four are for both girls and boys.

Madeline, in verse, about " twelve little girls who lived in two straight lines " (in Paris) under the benevolent care of a nice old lady, is for little girls. Mr. Bemelmans proved, in his exceedingly grown-up novel, Now I Lay Me Down to Sleep, that he was one of the most sophisticated of poetic writers ; here, drawing most com- panionably for little girls, he demonstrates his lightly-held but profound and affectionate understanding of places and people. norina, also for girls, comes from Switzerland, with beautifully reproduced large pictures of agreeable Alpine interiors and moun- tain scenes, but readers-aloud may find that the verse translation has not left the simple plot about a child, an Alp and a wild bird quite clear.

From Holland, for boys as well as girls, and in the less opulent category, comes Jan Klassen Cures the King by Antonia Ridge. It is a traditional Dutch fairy-story, adequately illustrated and giving its tale as an account of a puppet-show, simple but with the right amount of traditional magic, back-chat and jingles. Older children who think of making (or who have made) a puppet-theatre could turn it into an excellent script with (as far as the present writer's experience goes) only two technically difficult (but, if well contrived, rewarding) " on-stage" transformations—ugly Old Woman into Beautiful Fairy, Pale King into Rosy King. There would have to be , two puppets for each of these. Beginners could, no doubt, lower the curtain for the necessary substitutions.

Diana Ross has written a new " Little Red Engine " book. This time the tale ends with the small but Royal " Red" at the South Bank Exhibition—the delight of all, the one engine that children are allowed to touch, whose levers they may pull and whose knobs they may twist. Leslie Wood's illustratins are perhaps slightly less inspired than those of Lewitt-Him (the Little Red Engine's original illustrator). All the same they are very good.

In The Wonder World of Animals Marie Neurath has adopted the conventions of Isotype to produce a book which conveys, in an agreeable form, a good deal of the sort of truel information that all small children demand. Her two pages on bats answered several questions to the present writer's and her young collaborators' relief and satisfaction ; they were questions about how one ran a nursery while resting upside-down but flying right side up.

Last, three story-books. Stories for Jane raises in its first tale a problem in our new code of morals. Should Jane's mother have let her little friends look after her for the day when what kept her in bed was a sore throat and a fever ? Why, oh why, did not Miss Starr leave our consciences in peace by giving Jane a nice surgical disability instead ? However, on the ideas and tastes of mice, Miss Starr is most satisfactory. " Where the whiskers go without harm, the tail can safely follow "is a new but convincing ancient proverb.

Ursula Hourihane's Happy Go Lucky Stories and Dorothy Edwards' My Naughty Little Sister are from the B.B.C's " Listen With Mother " programme. The humanised creatures in Happy Go Lucky have a touch of the sort of whimsy that some readers will find a little shy-making, but My Naughty Little Sister lacks only more (and more lavish) illustrations to make it almost perfect of its kind—that is, a book to read to little girls between four and eight. The stories are realistic but imaginative—kinder, warmer-hearted Malheurs de Sophie. It has just been paid a high compliment. Two children, to whom the review-copy was read, then and there determined to save up 6s. (an immense sum on their budget) to buy it for themselves should the Spectator's copy go elsewhere.

The only lack this year for this age-group, so far as I have seen, is that there is no new collection of traditional fairy-tales. The material is there in whole shelves of learned works ; it gives the writer and above all, perhaps, the illustrator, ever fresh yet ever