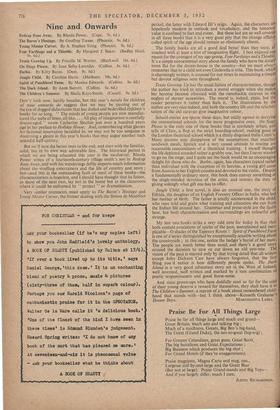 DON'T look now, hardly breathe, but this year's novels for children of nine onwards do suggest that we may be passing out of the era of dogged didacticism that has dulled and bedevilled children's books for so long. " The minds of young people are now manufac- tured like webs of linen, all like.... All play of imagination is carefully discouraged," wrote Catherine Sinclair just over a hundred years ago in her preface to Holiday House. And, remembering what glories her fictional innovation heralded in, we may not be too sanguine in discerning a gleam in this year's books that may augur another such splendid half-century.

But we'll save the better ones to the end, and start with the familiar, solid, but in its own way admirable fare. The historical period in which we are being educated this year is the mediaeval. Rhoda Power writes of a fourteenth-century village smith's son in Redcap Runs Away, and with his wanderings deftly imports much information about the strolling entertainers and the life of country and town ; but--and this is the outstanding fault of most of these books—the characterisation is hopeless, and I should have thought that its future, as those of the next two, lay not in the home but in the classroom where it could be enlivened by "project " or dramatisation.

Very similar comments must apply to The Baron's Hostage and Young Master Carver, the former dealing with the Simon de Montfort period, the latter with Edward Ill's reign. Again, the characters ate hopelessly modern in outlook and vocabulary, and the historiesl value is confined to fact and event. But these last are so well covereg in all three books that it is a very great pity that the strange afflati called spirit of the age should remain so obstinately absent.

The family, books are all a good deal better than they were, touched with at least a hint of imaginative flight. I best enjoyed o meant for the youngest of my age-group, Four Farthings and a Thimb It's a simple conventional story about the family who leave the dre town flat for the dream-house in the country—but we must ala remember that to a child not even Cinderella is trite. This book, wh' is charmingly written, is unusual for our times in maintaining a sim but devout religious note throughout.

Tessie Growing Up has the usual failure of characterisation, thoui the author has tried to introduce a moral struggle when she ma her heroine become obsessed with the ramshackle caravan to t neglect of sterner necessities. The moral is, indeed, plain, but reader perceives it rather than feels it. The illustrations by author are very nice indeed, and both the country life and the rehab tation of the old caravan give imaginative colour.

School-stories are sparse these days, but oddly agreed in decry' the conventional schools for the more progressive ones. On Si' Please is the only one of these books that is resolutely urban, a tells of Clare, a flop at the strict boarding-school, making good a the London theatrical school which is a thinly disguised Italia Conti 'S. Many parents may disapprove of the assumptions that snatched sandwich meals, lipstick and a very casual attitude to routine are reasonable concomitants of a theatrical training. I myself thought the life depicted sounded rather a grubby one, but then I never wanted to go on the stage, and I quite see the book would be an encouraging delight for those who do. Barbie, again, has characters typical rather than individual with the exception of its heroine, a young girl come from Austria to her English cousins and devoted to the violin. Despite a fundamentally ordinary story, this book does convey something of the single-minded devotion of the artist, and stresses the duty of giving willingly what gift one has to offer.

Jungle Child, a first novel, is also an unusual one, the story of Elfrida, the daughter of an English Forestry Officer in India, who lost her mother at birth. The father is totally uninterested in the child, who runs wild and grabs what training and education she can fronl the Indian life around her. Grammar and prose-style are the faults here, but both characterisation and surroundings are colourful and strange.

My last two books strike a very odd note for today in that they' both contain evocations of spirits of the past, unexplained and inex- plicable-0 shades of the Tapestry Room ! Spirit of Punchbowl Fann is one of dseries distinguished by exceptionally sensible writing about the countryside ; in this one, notice the badger's burial of her mate. The people are much better than usual, and there's a good storY around the decision to save or cut down an old yew-tree. The vision of the past is marred only by that trying detail that all writers except John Dickson Carr have always forgotten, that the first thing you'd notice is how differently people spoke. The Dark Island is a very good adventure story set in the West of Ireland, well invented, well written and marked by a rare combination of poetic responsiveness and good horse-sense.

And since grown-ups who have dutifully read so far for the sake of their young deserve a reward for themselves, they shall have it in The Childi.en's Summer, a reprint of a book about remembered child- hood that stands with—but I think above—Kenneth Grahame 's Dream Days. MARGHANITA LASKI.