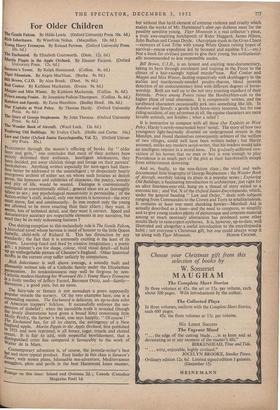 PLoumirN6 through the season's offering of books for "older boys and girls," one concludes that most of their authors have strictly delimited their audience. Intelligent adolescents, they have decided, put away childish things and forage on their parents' bookshelves. Anything written especially for teen-agers had there- fore better be addressed to the unintelligent ; to desperately hearty overgrown urchins of either sex on whom such luxuries as decent Prose, the humours and subtleties of character, the poetry, wonder and pity of life, would be wasted. Dialogue is conventionally colloquial or conventionally stilted ; general ideas are as thoroughly taboo as sex ; any psychological monstrosity is permissible ; of the fiction-writer's craft, indeed, only one maxim is honoured-the story must move, fast and continuously. In one respect only the young are allowed to be more exacting than their elders ; they want, it fteeMS, lots of technical detail, and they want it correct. Speed and documentary accuracy are respectable elements in any narrative, but need they be its only redeeming features ?

One shining exception to this melancholy rule is The Gentle Falcon, a historical novel whose heroine is maid of honour to the little Queen Isabelle, child-wife of Richard II. This has distinction by any Standards • the fact that it is extremely exciting is the least of its virtues. Learning fused and fired by creative imagination ; a poetic girt ; a painter's eye for shape, colour, vivid visual detail-all build tIP an unforgettable picture of Chaucer's England. Other historical tiov$1s in the current crop suffer unfairly by c6mparison.

Rich Inheritance is well above average, a soundly built and Pleasantly written tale of a Catholic family under the Elizabethan Persecution. Its tendentiousness may well be forgiven by non- F-atholic readers blushing for Westward Ho I Young Harry Tremayne a lively medley of Jeffery Farnol, Baroness Orczy, and-faintly- stevenson ; a good yarn, but no more.

The fairy-tale or fantasy is not nowadays a genre supposedly PoPular outside the nursery. Of the two examples here, one is a resounding success. The Enchanted is delicious, an up-to-date echo °I' American trappers' folklore. It successfully enforces the sus- Rension of disbelief ; when the incredible truth is revealed (though the lovely illustrations have given a broad hint) concerning little Molly Perdry, the farmer's bride, one says happily, "Of course ! " The E Enchanted has, for all its charm, the astringency of a New ng' ; .and apple. Martin Pippin in the Apple Orchard, first published 'El 1921 and now reprinted, is all honey, sugar, treacle and clotted cream. It is fair to add, with respectful bewilderment, that a distinguished critic has compared it favourably to the work of Walter de la Mare.

, Contemporary adventure is, of course, the juvenile-writer's best net and most typical product. Easy leader in this class is Saracen's rower, with stolen plans; Ishmaelite sea-adventure, Mediterranean snaugglers, plots and perils in the best Hammond Innes manner, Postage on this issue: Inland and Overseas 2d. ; Canada (Canadian Magazine Post) Id. but without that lurid element of extreme violence and cruelty which makes the works of Mr. Hammond's alter ego dubious meat for the possibly sensitive young. Tiger Mountain is a real collector's piece, a truly awe-inspiring hotchpotch of Rider Haggard, James Hilton, John Buchan and Conan Doyle. (Aeroplane crash in the Gran Chaco -rumours of Lost Tribe with young White Queen raising hopes of survival-rescue expedition led by bronzed and aquiline V.C.-etc.) Not a book for civilised parents to give their young, but enthusiastic- ally recommended to less responsible uncles.

Bill Brown, C.L D., is an honest and exciting near-documentary, taking its hero through enrolment and training in the Force to the climax of a hair-raisingly topical murder'''case. Red Conker and Magpie and Miss Winter, dealing respectively with skulduggery in the stables and murderously-minded poultry-thieves, blend juvenile detection of an undocumentary kind with different degrees of horse- worship. Both are well up to the not very exacting standard of their formula. Prhzce among Ponies raises the Houhnyhhm-cult to the higher plane of total obsession. It is competently written, and the cardboard characters occasionally jerk into something like life.. In Rainbow and Speedy, a gentle Irish horse-story innocent, but for one riding accident, of any adventure at all, the equine characters are mere lovable animals, not fetishes ; what a relief !

It is instructive to compare with all these Our Exploits at West Foley, Hardy's newly-resurrected boys' serial. The story of how two youngsters light-heartedly diverted an underground stream in the Mendips, and found themselves consequently arbiters of the welfare of two villages, could well have been written today ; but Hardy assumed, unlike any modern serial-writer, that his readers would take an intelligent interest in a moral issue. The gradually-achieved con- viction of his heroes that no man or boy is wise enough to play Providence is as much part of the plot as their hairsbreadth escape from subterranean drowning.

And so, finally, to the non-fiction class ; the vivid and well- documented little biography of George Stephenson'; the Wonder Book of Aircraft, worthily taking its place in a popular series ; Exploring Old Buildings, a fascinating introduction to architecture, just right for an alert fourteen-year-old, hung on a thread of story suited to a moronic ten ; and Vol. X of the Oxford Junior-Encyclopaedia, which, under the general heading " Law and Order," deals with subjects ranging from Commandos to the Crown and Torts to totalitarianism. It contains at least one most shocking howler-Marshall Aid is actually described as a loan-and the need to compress, to simplify and to give young readers plenty of picturesque and concrete material among so much necessary abstraction has produced some other results likely to raise expert eyebrows. It is, however, up-to-date, well illustrated and altogether a useful introduction to the encyclopaedia habit ; not everyone's Christmas gift, but one could always wrap it