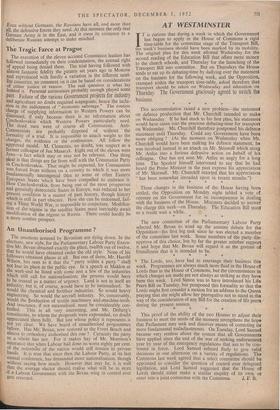 IT is curious that during a week in which the Government has begun to apply in the House of Commons a rigid time-table for the committee stage of the Transport Bill, the week's business should have been marked by its mobility. The original plan for this week allotted Wednesday for the second reading of the Education Bill that offers more money to the church schools, and Thursday for the launching of the Transport Bill into committee. But on Thursdays the House tends to eat up its debating-time by dallying over the statement on the business for the following week, and the Opposition, cramped within the transport time-table, asked therefore that transport should be taken on Wednesday and education on Thursday, The Government graciously agreed to switch OKI

* This accommodation 'raised a new problem—the statement on defence production that Mr. Churchill intended to make on Wednesday. If he had stuck to his first plan, his statement would have eaten intd the precious debating-time for transport on Wednesday. Mr. Churchill therefore postponed his defence statement until Thursday. Could any Government have been more obliging ? (At the moment on Wednesday when Mr. Churchill would have been making his defence statement, he was involved instead in an attack on Mr. Shinwell which stung Mr. Attlee into a furious defensive action on behalf of his colleague. One has not seen Mr. Attlee so angry for a long time. The Speaker himself intervened to say that he had heard the Prime Minister in the past express his appreciation of Mr. Shinwell. Mr. Churchill retorted that his appreciation "has been somewhat inroaded upon in tecent months.") These changes in the business of the House having been settled, the Opposition on Monday night tabled a vote of censure on the Government for its incompetence in dealing, with the business of the House. Ministers decided to answer the charge this week—on Thursday. The Education Bill must as a result wait a while.

Thp new committee of the Parliamentary Labour Party selected Mr. Bevan to wind up the censtire debate for the Opposition—his first big task since he was elected a member of the committee last week. Some members of the party dis- approve of this choice, but by far the greater number support it and hope that Mr. Bevan will regard it as the gesture of friendliness that it is intended to be. * * % The Lords, too, have had to rearrange their business this week. Programmes are always much more fluid in the House of Lords than in the House of Commons, but the circumstances in which changes are made are not always so striking as they have been this week. Lord Simon was to have introduced his Life Peers Bill on Tuesday, but postponed this formality so that the Lords might first consider a motion for an address to the Queen praying that she might allow her prerogative not to stand in the way of the consideration of any Bill for the creation of life peers during the present session.

This proof of the ability of the two Houses to adjust their business to meet the needs of the moment strengthens the hope that Parliament may, seek and discover means of correcting its more fundamental maladjustments. On Tuesday, Lord Samuel became very restless about the system that all Governments have applied since the end of the war of seeking endorsement year by year of the emergency regulations that are to be con- tinued in force. Lord Samuel .refused flatly to give valid decisions in one afternoon on a variety of regulations. The Commons last week agreed that a select committee should be appointed to consider the question of control, over delegated legislation, and Lord Samuel suggested that the House of Lords should either make a similar enquiry of its own., or enter into a joint committee with the Commons.