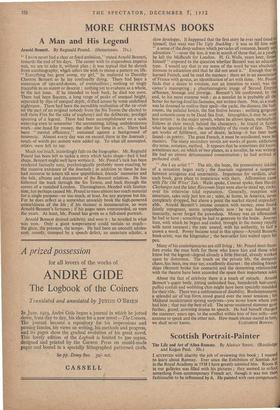 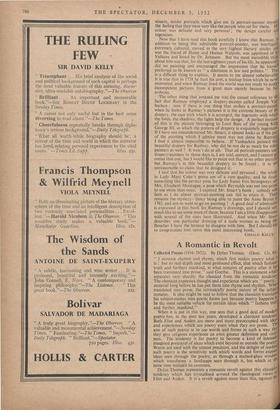 I ACCEPTED with alacrity the job of reviewing this book ; I wanted to learn about Ramsay. Ever since the Exhibition of Scottish Atr in the Royal Academy in 1938 I have greatly admired him. Rom 11 in our galleries was filled with his pictures ; they seemed to reflect something from contemporary French art, though it was not tt fashionable to be influenced by it. He painted with rare competen sincere, tender portraits which give me (a portrait-painter myse the feeling that they were very like the people who sat for them. colour was delicate and vely personal ; the design careful a ingenious.

Now that I have read this book carefully I know that Ramsay, addition to being this admirable portrait-painter, was intellige extremely cultured, moved in the very highest literary circles a was the friend of Hume and Horace Walpole, was approved of Voltaire and loved by Dr. Johnson. But the most incredible thi about him was that, for the last eighteen years of his life, he apparent did no painting and encouraged the impression that he him preferred to be known as " a dilettante in law and politics." Th is a difficult thing to explain. It seems to me almost unbelievab It is true that in 1778 he hurt his arm, a mishap from which he ne recovered, and when Ramsay lived the world was not ready to ac incompetent pictures from a great man merely because he h arthritis.

The other thing that amazed me was the casual reference to t fact that Ramsay employed a drapery-painter called Joseph V hacken ; now if there is one thing that strikes a portrait-paint when he looks at Ramsay's pictures it is the extreme beauty of t drapery, the care with which it is arranged, the ingenuity with whi the folds, the shadows, the lights help the design. A perfect instal" of this is the picture belonging to Lord Bute of the young Ki George Ill, in which the pattern of drapery is exquisitely ingenio If I have not misunderstood Mr. Smart, it almost looks as if the paft of the painting which I admire most was not done by Ramsa I rind it almost impossible to believe. If Vanhacken painted th beautiful drapery for Ramsay, why did he not do as much for ot painters as %Vell ? It won't do at all. That all portrait-painters u drapery-painters in those days is, I am told, correct, and I cannot round that one, but [would like to point out that in no other pictu but Ramsay's is this beautiful drapery to be found ; it is 11 unreasonable to claim that he designed it.

• I said that his colour was very delicate and personal ; the whit in Lady Mary Coke's gown are of a rare quality, and he foutA something like the perfect pose for Lady Susan Fox Strangways a Mrs. Elizabeth Montague, a pose which Reynolds was not too pro to use more than once. I enjoyed Mr. Smart's book ; nobody w feels as I do about portrait-painting can fail to enjoy it. Thet remains the mystery—fancy being able to paint the Anne Broun 1763, and not to want to go on painting I A good deal of admiratidit is expressed in this book for,Ramsay's drawings, and I should vet, much like to see some more of them, because I am a little disappoint with several of the ones here illustrated. And when Mr. Snlirt describes one particular drawing of a nude woman as being liKP Boucher I have the honour to disagree with him. But I should 011,6 to congratulate him upon this most interesting book.