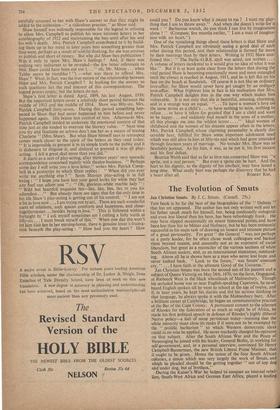 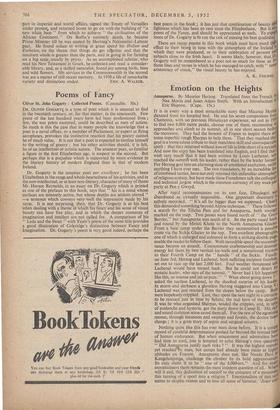 The Evolution of Smuts

Jan Christian Smuts. By J. C. Smuts. (Cassell. 25s.) THIS book is by far the best of the biographies of the •" Oubaas that has yet appeared. The author has not only written well and let his father speak much for himself, but, being confessedly eulogistic and even less liberal than his hero, has been refreshingly frank. He may have slipped occasionally on minor historical points, and have been less than fair to Milner and Hofmeyr, but he has been eminently successful in his main task of drawing an honest and intimate picture of a great personality. For great" the General "was, not perhaps as a party leader, for he often chose weak colleagues and backed them beyond reason, and assuredly not as an exponent of racial liberalism, but great as a reconciler of the various sections of white South African society, and, as an international statesman, outstand- ing. Above all he is shown here as a man who never lost hope and never looked back. " Look to the future," was Smuts' constant

cry," I have faith in the ultimate Good of the Universe."

Jan Christian Smuts was born the second son of his parents and a subject of Queen Victoria on May 24th, 1870, on the farm, Ongegund, at Riebeeck West in the black wheatlands of Malmesbury. Though his secluded home was so near English-speaking Capetown, he never heard English spoken till he went to school at the age of twelve, and if, in later years, he kept his diaries and did his serious thinking in that language, he always spoke it with the Malmesbury burr. After a brilliant career at Cambridge, he began an unremunerative practice at the Bar of the Cape Colony. A permanent convert to the schemes of Rhodes for the federation of as much as might be of Africa, he made his first political speech in defence of Rhodes's highly illiberal Native policy—a fact of some pertinence today—insisting that the white minority must close its ranks if it were not to be swamped by the " prolific barbarism " to which Western democratic ideas could in no wise be applied. He never markedly changed his opinions on that subject. After the South African War and the Peace of Vereeniging he joined with his leader, General Botha, in working for self-government, and, in a personal interview, convinced Sir Henry Campbell-Bannerman, the new British Liberal Prime Minister, that it ought to be given. Hence the union of the four South African colonies, a union which was very largely the work of Smuts, and which he pleaded should be the getting together "not of top dog and under dog, but of brothers."

During the Kaiser's War he helped to conquer an internal rebel- lion, South-West Africa and German East Africa, played a leading part in imperial and world affairs, signed the Treaty of Versailles under protest, and returned home to go on with the building of "a new white base " from which to achieve " the civilisation of the African Continent." On Botha's untimely death, he became Prime Minister till he was ousted by Hertzog's Nationalist-Labour pact, He found solace in writing at great speed his Holism and Evolution, on the theme that things do get tether and that the resultant whole is greater than the parts, and in going in for farming on a big scale, usually by proxy. As an accomplished scholar, who read his New Testament in Greek, he collected and read a consider- able library, and, as a skilled naturalist, found joy among birds, bees and wild flowers. His services to the Commonwealth in the second war are a matter of still recent memory. In 1950 a life of remarkable