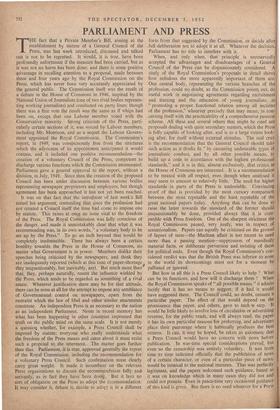 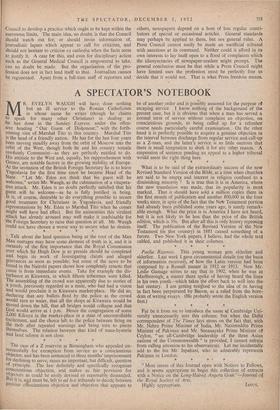 THE fact that a Private Member's Bill, aiming at the establishment by statute of a General Council of the Press, was last week introduced, discussed and talked out is not to be regretted. It would, it is true, have been profoundly unfortunate if the measure had been carried, but as it was not no harm has been done; and there is some positive advantage in recalling attention to a proposal, made between three and four years ago by the Royal Commission on the Press, which has never been very accurately appreciated by the general public. The Commission itself was the restilt of a debate in the House of Commons in 1946, inspired by the National Union of Journalists (one of two rival bodies represen- ting working journalists) and conducted on party lines; though there was a free vote the result was the same as if whips had been on, except that one Labour member voted with the Conservative minority. Strong criticism of the Press, parti- cularly certain sections of it, was voiced by Labour members, including Mr. Morrison, and as a sequel the Labour Govern- ment appointed the Royal Commission. The Commission's report, in 1949, was conspicuously free from the strictures which the advocates of its appointment anticipated it would contain, and it included one positive recommendation—the creation of a voluntary Council of the Press, competent to discharge various functions which the Commission enumerated. Parliament gave a general approval to• the report, without a division, in July, 1949. Since then the creation of the proposed Council has been under discussion between various bodies representing newspaper proprietors and employees, but though agreement has been approached it has not yet been reached.

It was on that fact that the introducer of last week's Bill rested his argument, contending that since the profession had not created a Council itself the time had come to impose one by statute. This raises at once an issue vital to the freedom of the Press. • The Royal Commission was fully conscious of the danger, and made it unmistakably clear that what it was recommending was, in its own words, "a voluntary body to be set up by the Press." To go an inch beyond that would be completely inadmissible. There has always been a certain hostility towards the Press in the House of Commons, no matter what Government is in power. Members dislike their speeches being criticised by the newspapers, and think they are inadequately reported (which at this time of paper-shortage, they unquestionably, but inevitably, are). But much more than that, they, perhaps naturally, resent the influence wielded by the Press, which tends to be regarded as something of a rival estate. Whatever justification there may be for that attitude, there can be none at all for the attempt to impose any semblance of Governmental control on newspapers, apart from the restraint which the law of libel and other similar enactments constitute. An independent Press is as necessary to the nation as an independent Parliament. Never in recent memory has what has been happening in other countries impressed that truth on the public mind on the same scale. It is not merely a question whether, for example, a _Press Council shall be imposed by statute; everyone who really understands what the freedom of the Press means and cares about it must resist such a proposal to the uttermost. The matter goes further than that. Parliament, it is true, approved generally the report of the Royal Commission, including the recommendation for a voluntary Press Council. Such confirmation must clearly carry great weight. It made it incumbent on the relevant Press organisations to discuss the recommendation fully and, serionsly, as in fact they have been doidg. But it lays no sort of obligation on the Press to adopt the recommendation. It may consider it, debate it, decide to adopt it in a different form from that suggested by the Commission, or decide after full deliberation not to adopt it at all. Whatever the decision, Parliament has no title to interfere with it.

When, and only when, that principle is unreservedly accepted the advantages and disadvantages of a General Council of the Press can be dispassionately considered. A study of the Royal Commission's proposals in detail shows how nebulous the more apparently important of them are.

One central body, representing the various branches of the profession, could no doubt, as the Commission points out, do useful work in negotiating agreements regarding recruitment and training and the education of young journalists; in "promoting a proper functional relation among all sections of the profession," whatever precisely that may mean; in con- cerning itself with the practicability of a comprehensive pension scheme. All these and several others that might be cited are proposals dealing with quite secondary matters, which the Press is fully capable °Hooking after, and is to a large extent look- ing after, for itself without external stimulus. The real crux is the recommendation that the General Council should take such action as it thinks fit "by censuring undesirable types of journalistic conduct, and by all other possible means, to build up a code in accordance with the highest professional standards," and it is in this, almost exclusively, that critics in the House of Commons are interested. It is a recommendation to be treated with all respect, even though when analysed it may seem to amount to relatively little. The need for higher standards in parts of the Press is undeniable. Convincing proof of that is provided by the most cursory comparison between the most reputable and the least reputable of the great national papers today. Anything that can be done to raise the latter towards the standard , of the former should unquestionably be done, provided always that it is com- patible with press freedom. One of the sharpest strictures the Royal Commission passed, very justly, was in respect of sensationalism. Papers can equally be criticised on the ground of lapses of taste—the Maclean affair is too recent to need more than a passing mention—suppression of manifestlY material facts, or deliberate perversion and twisting of them for political ends. Even though the Royal Commission's con- sidered verdict was that the British Press was inferior to none in the world its shortcomings must not for a moment be palliated or ignored. But how in all this is a Press Council likely to help ? What can be its functions, and how will it discharge them ? When the Royal Commission speaks of" all possible means" it admits tacitly that it has no means to suggest; if it had it would have suggested them. The Council could, no doubt, censure a particular paper. The effect of that would depend on the pfominence that paper, and others, gave to such sa step. It would be little likely to involve loss of circulatibn or advertising revenue, for the public reads, and will always read, the paper it has its own particular reasons for preferring, and advertisers place their patronage where it habitually produces the best returns. It can, it may be hoped, be taken as axiomatic that a Press Council would have no concern with news before publication. In war-time special considerrions prevail, but even so the censorship was entirely voluntary. It was from time to time indicated officially that the publieation of nevvs of a certain character, or even of a particular piece of news, would be inimical to the national interests. That was perfectly legitimate, and the papers welcomed such guidance, based as it was on knowledge which in many cases they did not and could not possess. Even in peace-time very occasional guidance of this kind is given. But there is no need whatever for a Press Council to develop a practice which ought to be kept within the narrowest limits. The main idea, no doubt, is that the Council should watch out for, or should invite information of, journalistic lapses which appear to call for criticism, and should not hesitate to criticise ex cathedra when the facts seem to justify it. A case for this, and even for disciplinary action such as the General Medical Council is empowered to take, can no doubt be made. But the organisation of the pro- fession does not in fact lend itself to that. Journalism cannot be regimented. Apart from a full-time staff of reporters and others, newspapers depend on a host of less regular contri- butors of special or occasional articles. General standards may perhaps be applied to them, but not general rules. A Press Council cannot easily be made an unofficial tribunal with sanctions at its command. Neither could it afford in its own interests to lay itself open to a flood of complaints which the idiosyncracies of newspaper,readers might prompt. The general conclusion must be that while a Press Council might have limited uses the profession must be perfectly free to decide that it would not. That is what Press freedom means.