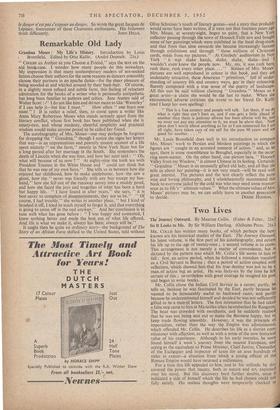 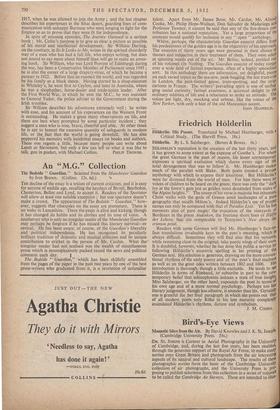 MR. Cows has written many books, of which perhaps the Best- known are his historical studies of the East. The Journey °Inward, his latest volume, is the first part of his autobiography, and covers his life up to the age of twenty-nine ; a second volume is to come. This arrangement is not merely a matter of convenience, but is dictated by the pattern into which Mr. Collis's life seems to him to fall ; first, an active period, when he followed a mistaken vocation as a Civil Servant in Burma ; then a perky(' of action coupled with reflection, which showed him that his true destiny was not to be a man-of action bus an artist. He was forty-six by the time he felt certain of this ; nevertheless with great courage he resigned his post and began to write books. Mr. Collis chose the Indian Civil Service as a career, partly, he tells us, because he was fascinated by the East, partly because he wanted to be honourably useful to backward races, and partlY because he underestimated himself and decided he was not sufficientlY gifted to be a man of letters. The first intimation that he had taken a false step came to him at Marseilles when he embarked for Rangoon. The boat was crowded with merchants, and he suddenly realised that he was not being sent out to make the Burmese happy, but to keep trade flowing smoothly. However, it was the principle of imperialism, rather than the way the Empire was administered, which offended Mr. Collis. He describes his life as a district com- missioner with affection, as well as with a sense of the now historical value of his experience. Although in his early twenties, he soon found himself a week's journey from the nearest European, and acting as the equivalentito Prime Minister, Chief Justice, Chancellor of the Exchequer and inspector of taxes for an area hundreds of -miles in extent—a situation from which a young official of the Roman Empire would have returned a millionaire. For a time this life appealed to him, and in his solitude he dis- covered the power that beauty, both in nature and art, exercised over his mind. But this discovery bred further doubts, since it indicated a side of himself which the life he had chosen could not fully satisfy. His restless thoughts were temporarily checked 10 1917, when he was allowed to join the Army ; and the last chapter describes his experiences in the Sinai desert, guarding lines of com- munication with unhappy Burmese who were longing to fight for the Empire so as to prove that they were fit for independence.

In spite of amusing episodes, The Journey Outward is a serious book ; Mr. Collis's purpose is to give as clear a picture as possible of his moral and intellectual development. Sir William Darling, on the contrary, in So It Looks to Me, writes in the spirited disorderly way of a man who has had a full life, who enjoys writing, but does not intend to say more about himself than will go to make an amus- ing book. Sir William, who was Lord Provost of Edinburgh during the war, has been a Conservative Member of Parliament since 1945; he is also the owner of a large drapery-store, of which he became a partner in 1922. Before that he roamed the world, and was regarded by his family as a black sheep. Having started Its a shop-aSsistant in Whiteley's, he went first to Ceylon, and later to Australia, where he was a shopkeelier, horse-dealer and trade-union leader. After the First World War, in which he won the M.C., he was assistant to General Tudor, the police adviser to the Government during the Irish troubles.

Sir William describes his adventures extremely well ; he writes with ease, and his account of his experiences on the Western Front is outstanding. He makes a great many observations on life, and these are best when prompted by some particular incident ; they suggest a man who is wise, brave, cheerful and able. At other times he is apt to lament the excessive quantity of safeguards in modern life, or the .fact that the world is going downhill. He has also peppered his memoirs with incidental essays on books and authors. These one regrets a little, because many people can write about Lamb or Stevenson, but only a few can tell us what it was like to talk, gun in pocket, with Michael Collins. PHILIP TROWEL