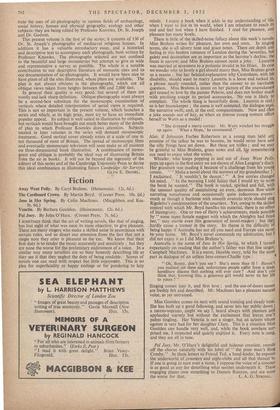 Away Went Polly. By Caryl Brahms. (Heinemann. 12s. 6d.) The Cardboard Crown. By Martin Boyd. (Cresset Press. 10s. 6d.) Venetia. By Barbara Goolden. (Heinemann. 12s. 6d.) Pal Joey. By John O'Hara. (Cresset Press. 7s. 6d.) I SOMETIMES think that the art of writing novels, like that of singing, has lost sight of what was once its main objective, to give pleasure. There are many singers who make a skilled noise in accordance with certain rules, and so divert our attention from the fact that not a single note they utter is pleasant to the ear. We know that their first duty is to render the music accurately and sensitively ; but they are none the worse for the preliminary endowment of a voice. In a similar way many novelists are so busy honestly describing life as they see it that they neglect the duty of being readable. Scores of novels one can read with respect but little enjoyment. This is no plea for superficiality or happy endings or for pandering to lazy minds. 1 enjoy a book when it adds to my understanding of life! when I want to live in its world, when I am reluctant to reach iV end and feel lost when I have finished. I read for pleasure, and pleasure has many levels. • There is little of the skilled-noise fallacy about this week's novels, Miss Brahms writes for pleasure, her own and ours. In singing terms, she is all silvery tone and grace notes. There are depth and feeling in this broken romance of London during the 'seventies, bul gaiety and decoration are as important as the heroine's decline, the focus is narrow, and Miss Brahms cannot resist a joke. Lauretta was married at seventeen to a pedantic invalid in his fifties. In case we wonder why so lovely a girl should marry thus, Miss Brahms give: us a reason ; but her belated explanation why Caversham, with hit disability, should want to marry Lauretta is a loose end tucked in a phrase neatly rounded, rather than the answer to an inevitable question. Miss Brahms is intent on her picture of the unawakenee girl roused to love by the painter Pelerin, and does not bother muct with anything except its period accessories. No one is likely tc complain. The whole thing is beautifully done. Lauretta is real so is her housekeeper ; the scene is well animated, the dialogue neat the narrative swift, and, at the end, compassionate. Now and titer a joke sounds out of key, as when an intense young woman offert herself to Watts as a model :

"She dropped a merry curtsey. Mr. Watts watched her struggll up again. ' What a Hope,' he commented."

Also, if Johnston Forbes Robertson as a young man held an3 promise of the talker he was to become, he would never have said the silly things here set down. But these are trifles ; and we ma3 be grateful to Miss Brahms, grace notes and all, for remembering our need to enjoy what she writes. Whistler, who keeps popping in and out of Away Went Polly, pops up again in the first entry we are shown of Alice Langton's diary. Her grandson was reading it because of n challenge from his young cousin. ' Make a novel about the sorrows of my grandmother ! I exclaimed. It wouldn't be decent.'" A few entries changed his mind. "In the morning I told Julian that I would try to write the book he wanted." The book is varied, spirited and full, with the unusual quality of maintaining an even, decorous flow while narrating tumultuous and occasionally quite indecorous events much as though a baritone with smooth oratorio style should sing Rigoletto's condemnation of the courtiers. Yet, owing to the skilled control with which Mr. Boyd handles his material, there is no effect of incongruity. One or two of Hetty's achievements, made possible by" some super female magnet with which the Almighty had fitted her," may startle even this generation of novel-readers; but theY hardly cause a tremor in the story. Its theme is the difficulty of being happy if Australia has not all you need and Europe can never be your home. Mr. Boyd's novel commands my admiration, but I did not enjoy it as I did Miss Brahms's. Australia is the scene of June In Her Spring, to which I turned expectantly on reading that the author's father was that fine singer, Campbell MacInnes. It is a warm, likeable story, told for the most part in dialogue of an artless here-comes-Charlie type : z "Oh, Benny, Oon't you see ! She's more than ill ! Haven't you realised yet these sad, unfortunate people suffer from a deef, hereditary disease that nothing will ever cure ? -And don't you think that, knowing this, a generous girl would never tie her life to yours ? "

Singing comes into it, and first love ; and the out-of-doors scenes are freshly felt and described. Mr. MacInnes has a pleasant natural voice, as yet untrained.

Miss Goolden comes on next with sound training and steady tone She has built up a good following, and never lets her public down a mezzo-soprano, might we say ?, heard always with pleasure and applauded warmly but without the excitement that leaves one's palms tingling. Her Venetia is not a singer, but an actress whose egoism is very bad for her daughter Clare. This is a sithation Miss Goolden can handle very well, and, while the book nowhere sur- prised me, I respected and quietly enjoyed it. Every note is sung , and they are all in tune.

Pal Joey, Mr. O'Hara's delightful and hideous creation, round off the chorus naturally with his label of " the poor man's Bing Crosby." In these letters to Friend Ted, a band-leader, he exposes the underworld of crooners and night-clubs and all that therein i! Hone is going to turn over a stone, I suppose the voice of a crooner is as good as any for describing what seethes underneath it. These engaging pieces owe something to Damon Runyon, and are none the worse for that. L. A. G. STRONG.