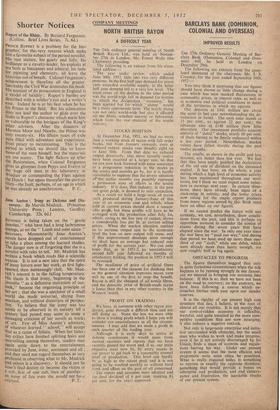 PRINCE RUPERT is a problem for the bio- grapher, for the, very reasons which make him a favourite subject of the period novelist. His vast stature, his gaiety and folly, his brilliance as a cavalry-leader, his exploits at ' sea both as buccaneer and admiral, his taste for painting and chemistry, all leave the historian out of breath. Colonel Fergusson's achievement is therefore all the greater. Inevitably the Civil War dominates his book. His account of its prosecution in England is U model of lucidity ; Rupert's battles are described with a soldier's eye and a writer's ease. Indeed he is at his best when he has his Prince in the field. But his admiration does not lead the author to glide over the faults in Rupert's character which made him SO vulnerable to the intrigues of the King's Other advisers. After the disasters or Marston Moor and Naseby, the Prince was only twenty-six. His fifteen years of exile were filled with adventure and experiment, from piracy to mezzotinting. This is the Period in which we Should like to know more-of the man himself, but the materials are too scanty. The light flickers up after the Restoration, when Colonel Fergusson gives us glimpses from Pepys and Evelyn of the huge old man in his laboratory at Windsor or commanding the Fleet against the Dutch ' • but again thereafter the portt.ait blurs—the fault, perhaps, of an age in which

he was already an anachronism. P. C. ,