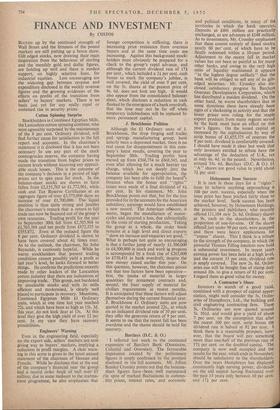 By CUSTOS BUOYED up by the continued strength of Wall Street and the firmness of the pound markets are still putting up a brave show. Gilt edged stocks, now drawing their main inspiration from the behaviour of sterling and the -monthly gold and dollar figures, are holding up well and there is modest support, on highly selective lines, for industrial equities. Less encouraging are the widening gap between revenue and expenditure disclosed in the weekly revenue figures and the growing evidences of the effects on profits of the transition from sellers' to buyers' markets. There is no basis just yet for any really rapid or sustained rise in security prices.

Cotton Spinning Surprise Stockholders in Combined Egyptian Mills, the Lan'cashire cotton spinning combine, who were agreeably surprised by the maintenance of the 8 per cent. Ordinary dividend, will find further cause for satisfaction in the full report and accounts. In •the chairman's statement it is disclosed that it has not been necessary to use any part of the stock contingencies reserve, the company having made the transition from higher prices to current levels without incurring any appreci- able stock losses. This is the outcome of the company's decision in a period of high prices not to spin yarn for stock. In the balance-sheet stocks are shown to have fallen from £2,155,765 to £1,772,901, while cash and Tax Reserve Certificates at an aggregate figure of over £3,575,000 show an increase of over £1,700,000. The liquid position is thus quite strong and justifies the chairman's remark that a return to full trade can now be financed out of the group's own resources. Trading profit for the year ; to September 30th fell from £2,505,964 to £1,703,384 and net profit from £872,525 to £555,872. Even at the reduced figure the . 8 per cent. Ordinary dividend is shown to have been covered about 44 times over. As to the outlook, the chairman, Sir John Reynolds, is cautiously hopeful. While he warns stockholders that present trading conditions cannot possibly yield a profit at last year's level, he looks forward to better things. He confirms the predictions recently made by other leaders of the Lancashire cotton industry that there are indications of improving trade. This group, not burdened by unsaleable stocks and with its mills efficient and modernised, is clearly well ,laced to participate in recovery. Meantime, Combined Egyptian Mills £1 Ordinary units, which at one time last year reached 22s. and which have been as high as 15s. 3d. this year, do not look dear at 13s. At this level they give the high yield of over 12 per cent. In my view they have recovery possibilities, Engineers' Warning Even in the engineering field, especially on the export side, sellers' markets are now giving way to buyers' markets, implying a reduction in profit margins. A clear warn- ing in this sense is given in the latest annual statement of the chairman of Heenan and Froude. While he discloses that at the end of the company's financial year the group had a record order book of well over £5 million, due in some meAsure to the rearma- ment programme, he also emphasises that foreign competition is stiffening, there is increasing price resistance from overseas buyers and at the same time costs are increasing. Against this background stock- holders must obviously be prepared for a check to the group's rapid advance, and although the current dividend rate of 17/ per tent., which included a 24 per cent. cash bonus to mark the company's jubilee, is well covered, the yield of over 9 per cent. on the 5s. shares at the present price of 9s. 6d. does not look too high. It would also appear from the consolidated balance- sheet, which discloses a reduction in cash flanked by the emergence of a bank overdraft, that the time may not be far off when temporary indebtedness will be replaced by more permanent capital.

J. Brockhotie Nation Although the £1 Ordinary units of J. Brockhouse, the drop forging and trailer and springs ' manufacturing group, have latterly been a depressed market, there is no real cause for disappointment in this com- pany's latest results, covering the year to September 30th. Trading profits have moved up from £568,754 to £668,545, and even after allowing for a much heavier tax charge, which has cut deeply into the balance available for appropriation, the company has been able to fulfil the board's forecast when the bonus and "rights" issues were made of a final dividend of 64 per cent. In his statement, Mr. John Brockhouse points out that, but for the loss provided for in the accounts for the American subsidiary, earnings would have established a new record. The American offshoot, it seems, began the manufacture of motor- cycles and incurred a loss, due substantially to the costs of starting production. Taking the group as a whole, the order book remains at a high level and direct exports "show an increase and.enquiries are good." What is perhaps not quite so encouraging is that a further jump of nearly £1,500,000 to £4,500,000 in stock and work in progress is accompanied by a fresh rise of £265,000 to £570,451 in bank overdraft, despite the new money raised earlier this year. On this question, however, the chairman points out that two factors have been operative— first, the intake of material in larger quantities for armament contracts and, second, the freer supply of material for civilian requirements in recent months. It is anticipated that these factors will adjust themselves during the current financial year. J. Brockhouse £1 Ordinary units are now quoted in the market around 22s., at which on an indicated dividend rate of 10 per cent. they offer the generous return of 9 per cent. It seems to me that the recent fall has been overdone and the shares should be held for recovery.

Barclays (D.C. & 0.) ' I referred last week to the continued expansion of Barclays Bank (Dominion, Colonial and -Overseas). The favourable impression created by the preliminary figures is amply confirmed by the position disclosed in the full accounts. Mr. Julian Stanley Crossley points out that the balance- sheet figures have ,,been well maintained Vin spite of marked fluctuations in commo- dity prices, interest rates, and economic and political conditions, in many of territories in which the bank opera Deposits at £441 million are practic unchanged, as are advances at £148 milli As to investments, Mr. Crossley emphasi that these consist entirely of dated stoc nearly 60 per cent. of which have to finally redeemed within a 10-year peni Adjustment to the recent fall in mar values has not been so painful as for, ml other banks, and owing to the very h ratio of liquidity maintained it appe "in the highest degree unlikely" that bank will be obliged to sell any of its g edged securities. Mr. Crossley also c closed satisfactory progress by Barcl. Overseas Development Corporation, wh has distributed a maiden dividend. On 1 other hand, he warns shareholders that some directions there have already lx signs of a slackening in activity and that 1 lower prices' now ruling for the 'sta export products from many regions serl by the bank must have an effect On t year's figures. On the issued capital increased by the capitalisation by way scrip bonus of £1,655,375 of reserves 8 per tent. dividend is comfortably coven I should have made it clear last week ti only investors entitled to rebate have 1 advantage of the deduction of U.K. 1 at only 6s. 4d. in the pound. Neverthele around 33s. 6d. Barclays (D.C. & 0.) "A" shares are good value to yield abc 34 per cent, Heinemann Issue Success It is rare in these days for a "right " issue to achieve anything approaching a 100 per cent. success, especially when the issue price has been pitched fairly close to the market level. Such success has been achieved, however, by Heinemann Holdings, the printers and publishers, who recently offered 111,104 new 2s. 6d. Ordinary shares at 9s. each to the shareholders, in the proportion of one-for-nine. Of the shares offered just under 99 per cent, were accepted and there were heavy applications for "excess" shares. This I think is a tribute to the strength of the company, in which the powerful Thomas Tilling interests now hold a substantial investment. In recent years earning power has been held at a high level, and the current 35 per cent. dividend rate is amply covered. The new 2s. 6d. Ordin- aries can still be bought free of stamp duty around 10s. to give a return of 81 per cent. I 'regard them as good value for money.

A Contractor's Share Investors in search of a good yie combined with a prospect of capital appre- ciation, might well consider the 5s. Ordin- aries of Humphreys, Ltd., the building and civil engineering contracting firm. These 5s. Ordinaries are now quoted around 5s. 10/d. and would give a yield of about 7 per cent. on the assumption that after the recent .100 per cent, scrip bonus the dividend rate is halved at 81 per cent. think there is a reasonable prospect, how- ever, that the board will pay something more than one-half of the previous rate of 17/ per cent, on the doubled capital. The company is now well occupied and the results for the year, which ends in November, should be satisfactory to the shareholders. Over the years Humphreys has displayed consistently high earning power, dividends on the old capital having fluctuated over the past 15 years only between 10 per cei t• and 17/ per cent. the es. illy on, ses ks, be od. ket nmy gh ars he It- is- ys ch he in en he pie ed iiS as of he d.