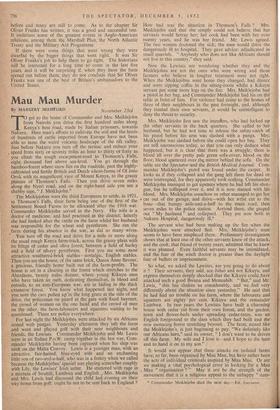 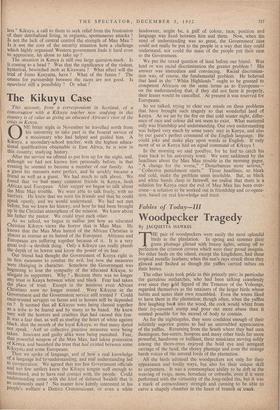 By MARGERY MUMEORD No 23rd

The Meiklejohns were the third Europeans to settle, in 1921, in Thomson's Falls, their farm being one of the first of the Settlement Board Farms to be allocated after the 1918 war. Commander Meiklejohn served in the Navy. His wife is a doctor of medicine, and had practised in the district; latterly she had looked after the cattle on the farm whilst her husband was responsible for the wheat and pyrethrum. She ran the farm during his absence in the war, as did so many wives.

You turn off the road and drive for a mile or more along the usual rough Kenya farm-track, across the grassy plain with its fringe of cedar and olive forest, between a field of barley and a field of silvery pyrethrum. First you see some most attractive weathered-brick stables—nostalgic, English stables. Then you see the house, of the same brick, Queen Anne flavour; a gracious, friendly home built out of the farm-profits. The house is set in a clearing in the forest which stretches to the Aberdares, twenty miles distant, where young Kikuyu men who have taken an oath, dedicating themselves, in blood and entrails, to an anti-European war, are in hiding in the thick extensive forest. You know what happened last night, and you note the cars pulled up`in the long grass at the side of the drive, the policeman on guard at the gate with fixed bayonet, the crowd of women on the one hand and the crowd of men on the other, the farm-labourers and squatters waiting to be questioned. There are police everywhere.

For last night the Meiklejohns were attacked by six Africans armed with pangas. Yesterday afternoon they left the farm and went and played golf with their near neighbours and friends, the Lewises. Commander Meiklejohn and Mr. Lewis were in an Italian P.o.W. camp together in the last war, Com- mander Meiklejohn having been captured when his ship was sunk on the Malta Convoy. Lewis is a younger man, with an attractive, fair-haired, blue-eyed wife and an enchanting little son of two-and-a-half, who was in a frenzy when we called because the Meiklejohns' spaniel was playing somewhat roughly with Lily, the Lewises' Irish setter. He stuttered with rage in a mixture of Swahili, Lumbwa and English. , Mrs. Meiklejohn and Mrs. Lewis had discussed the child last evening on their way home from golf; ought he not to be sent back to England ? How bad was the situation in • Thomson's Falls ? Mrs. Meiklejohn said that she simply could not believe that her servants would betray her; her cook had been with her over twenty years, and he was her friend. Mr. Lewis agreed. The two women doctored the sick; the men would drive the dangerously ill to hospital. They gave advice; adjudicated in small quarrels. "Anybody who does not like Africans should not live in this country," they said.

Now the Lewises are wondering whether they and the Meiklejohns are not the ones who were wrong and those farmers who believe in tougher treatment were not right. When the Meiklejohns went home they changed, had dinner and -were sipping coffee in the sitting-room whilst a Kikuyu servant put some more logs on the fire. Mrs. Meiklejohn had a pistol in her bag, and Commander Meiklejohn had his on the table in front-of him. For violence had come to the homes of three of their neighbours in the past fortnight, and, although they trusted their own servants, it would be unintelligent to deny the threauto security.

Mrs. Meiklejohn first saw the intruders, who had locked up the other servants in the back quarters. She called to her husband, but he had not time to release the safety-catch of his pistol before his arm was slashed with a panga. Mrs. Meiklejohn was slashed before she could open her bag. They are still unconscious today, so that you can only deduce what happened, but it is clear that there was a struggle; there is blood all over the pretty pale green sofa-cover, blood on the floor, blood spattered over th% mirror behind the sofa. On the table are the Spectator and the British Medical Journal. Com- mander Meiklejohn's pistol was found under the carpet. It looks as if they collapsed and the gang left them for dead or were interrupted, for they apparently took nothing. Commander Meiklejohn managed to get upstairs where he had left his shot- gun, but he collapsed over it, and it is now stained with his blood. Mrs. Meiklejohn somehow or other managed to get her car out of the garage, and drive—with her wtist cut to the bone—that bumpy mile-and-a-half to the main road, then seven miles to the police station. Arrived there, she gasped out "My husband" and collapsed. They arc now both in Nakuru Hospital, dangerously ill.* The servant who had been making up the fire when the Meiklejohns were attacked fled. Mrs. Meiklejohn's trust seems to have been misplaced there. Preliminary investigation shows that at least one of the other servants knew of the attack, and the cook, that friend of twenty years, admitted that he knew it was planned. Even faithful servants may be intimidated, and the fear of the witch doctor is greater than the daylight fear of bullets or imprisonment.

So what, we asked the Lewises, are you going to do about it ? Their servants, they said, are Jaluo and not Kikuyu, and express themselves deeply shocked that the Kikuyu could.have attacked such a good Bwana and Memsahib. "But," said Mr. Lewis, "this has shaken us considerably, and we .feel very differently about the situation since yesterday." He said that he had had no trouble on his farm, where the labourers and squatters are eighty per cent. Kikuyu and the remainder Lumbwa. In two years the Lewises have built a charming house with cedar cut from their own forest, and the garden, lawn and flower-beds under spreading cedar-trees, was an English foreground to the dam which they had built and the now menacing forest stretching beyond. The farm, mixed like the Meiklejohn's, is just beginning to pay. "We definitely like our Africans here," said its owner, "I don't want to be driven off this farm. My wife and I love it—and I hope to die here and to hand it on to my son." / It would not appear that these attacks on isolated farm have, so flit., been organised by Mau Mau, but have rather bee the acts of individual criminals inspired by Mau Mau. Or a we making a vital psychological error in looking for a Ma Mau "organisation ? May it not be the strength of th movement that it is a religious appeal to the unhappy " stat * Commander Meiklejohn died the next day.—Ed. Spectator. less" Kikuyu, a call to them to seek relief from the frustration of their detribalised living, in orgiastic, spontaneous attacks ? Is not the lack of central control the strength of Mau Mau ? Is it not the core of the security situation here a challenge Which highly organised Western government finds it hard even to appreciate, let alone to take up ? The situation in Kenya is still one large question-mark. Is it coming to a head ? Was that the significance of the violent, hysterical, bewitched mob at .Kirawara ? What effect will the trial of Jonio Kenyatta, have ? What of the future ? The Omens for partnership between the races are not good. Is apartheid still a possibility ? Or what ?