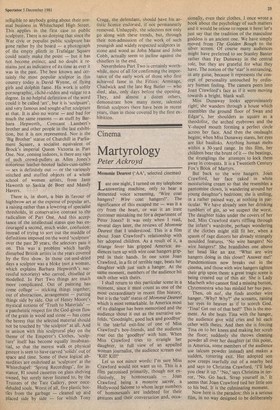 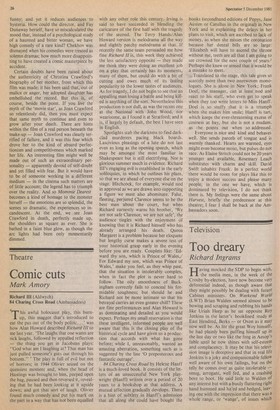 Mommie Dearest ('AA', selected cinemas) Late one night, I turned on my telephone answering machine, only to hear a demented voice screaming, 'Wire coat hangers? Wire coat hangers!'. The significance of this escaped me — was it a cry from the heart, or was it an irate customer mistaking me for a department of Peter Jones? It was only when I read, several days later, the reviews of Mommie Dearest that I understood. This is a film about Joan Crawford's relationship with her adopted children. As a result of it, a strange fever has gripped America: audiences turn up with wire coat hangers gripped in their hands. In one scene Joan Crawford, in a fit of terrible rage, beats her daughter with just such a hanger. At the same moment, members of the audience hit each other with theirs.

I shall return to this particular scene in a moment, since it must count as one of the most extraordinary in recent film history, but it is the 'cult' status of Mommie Dearest which is most remarkable. In America most of its dialogue has been memorised and the audience shout it out as the narrative unfolds. 'Goodnight, good luck and goodbye' is the tearful exit-line of one of Miss Crawford's boy-friends, and the audience roar out the 'goodbye' with him. When Miss Crawford tries to strangle her daughter, in full view of an appalled woman journalist, the audience scream out 'Kill! Kill!'

Let us not mince words: I'm sure Miss Crawford would not want us to. This is a film patronised primarily, though not exclusively, by homosexuals — Joan Crawford being a monstre sacree, a Hollywood Salome to whom large numbers of homosexuals are indebted for their gestures and their conversation and, occa sionally, even their clothes. I once wrote a book about the psychology of such matters and it would be otiose to repeat it here: let's just say that the tradition of the masculine goddess is an ancient one. We have simply moved from The Golden Bough to the silver screen. Of course many audiences might have preferred to see Stanley Baxter rather than Fay Dunaway in the central role, but they are grateful for what they have. The notion of the 'star' is entrancing, in any guise, because it represents the concept of personality untouched by ordinary human feeling. The camera peers into Joan Crawford's face as if it were moving towards a bright, blank wall.

Miss Dunaway looks approximately right; she wanders through a house which resembles the ground floor of Swan and Edgar's, her shoulders as square as a theodolite, the arched eyebrows and the V-shaped mouth forming a perfect circle across her face. And then the onslaught begins; when Miss Dunaway stares, her eyes are like basilisks. Anything human melts within a 30-yard range. In this film, her children bear the brunt of it — the beatings, the stranglings the attempts to lock them away in convents. It is a Twentieth Century Fox's Book of Martyrs.

But back to the wire hangers. Joan Crawford, her face caked in white moisturising cream so that she resembles a pantomine clown, is wandering around her young daughter's bedroom; she is smiling, in a rather pained way, at nothing in particular. We have already seen her drinking tumblers of gin, so we suspect the worst. The daughter hides under the covers of her bed. Miss Crawford starts riffling through the infant's wardrobe, perhaps wondering if the clothes might still fit her, when a spasm of rage distorts her already strangely moulded features. `No wire hangers! No wire hangers!' She brandishes one above her head like an axe. 'What are wire hangers doing in this closet? Answer me!' Pandemonium now breaks out in the cinema, and those with wire hangers tighten their grip upon them: a great tragic scene is being created out of thin air. She is Lady Macbeth who cannot find a missing button, Clytemnestra who has mislaid her bus pass.

Then, oh no!, she finds another wire hanger. 'Why? Why?' she screams, raising her eyes to heaven as if to scorch God. 'Tina! Get out of that bed!' This is the moment. As she beats Tina with the hanger, the audience give wild cries and hit each other with theirs. And then she is forcing Tina on to her knees and making her scrub the floor; suddenly she throws cleaning powder all over her daughter (at this point, in America, some members of the audience use talcum powder instead) and makes a sudden, tottering exit. Her adopted son now creeps tearfully out of a nearby bed and says to Christina Crawford, 'I'll help you clear it up.' No,' says Christina in terror, `No. Go back. Strap yourself in.' It seems that Joan Crawford tied her little son to his bed. It is the culminating moment.

Now here is the paradox: this is a serious film, in no way designed to be deliberately funny; and yet it reduces audiences to hysteria. How could the director, and Fay Dunaway herself, have so miscalculated the mood that, instead of a psychological study of a haunted and bitter woman, we have high comedy of a rare kind? Chekhov was dismayed when his comedies were treated as solemn dramas; how much more disappointing to have created a comic masterpiece by accident.

Certain doubts have been raised about the authenticity of Christina Crawford's biography of her mother, from which this film was made; it has been said that, out of malice or anger, her adopted daughter has embellished the record. But this is, of course, beside the point. If you live the myth of the 'movie star', as Joan Crawford so relentlessly did, then you must expect that same myth to continue and even to grow after your death. There are hints within the film of a real person beneath the make-up — Joan Crawford was clearly terrified of failure, and it was this fear which drove her to the kind of absurd perfectionism and competitiveness which marked her life. An interesting film might well be made out of such an extraordinary personality — apparently devoid of self-doubt and yet filled with fear. But it would have to be of someone working in a different medium — in the cinema such matters are of little account; the legend has to triumph over the reality. And so Mommie Dearest becomes a kind of homage to the monster herself — the emotions are so splendid, the scenes so dramatic, the experiences so incandescent. At the end, we see Joan Crawford in death, perfectly made up, the shoulders as square as ever. She is bathed in a faint blue glow, as though the arc lights had been only momentarily dimmed.