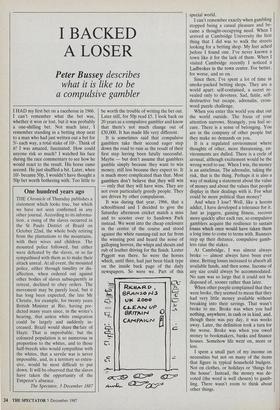 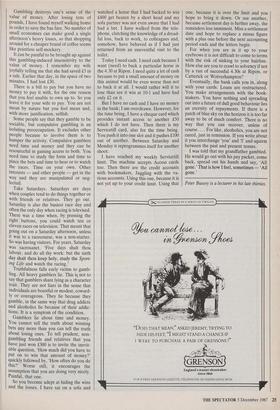 I BACKED A LOSER

what it is like to be a compulsive gambler

I HAD my first bet on a racehorse in 1966. I can't remember what the bet was, whether it won or lost, but it was probably a one-shilling bet. Not much later, I remember standing in a betting shop next to a man who had just written out a bet for 5/- each way, a total stake of 10/-. Think of it! I was amazed, fascinated. How could anyone risk so much? I watched his face during the race commentary to see how he would react to the result. His horse came second. He just shuffled a bit. Later, when 10/- became 50p, I wouldn't have thought a 50p bet worth bothering with. Too little to be worth the trouble of writing the bet out. Later still, for 50p read £5. I look back on 20 years as a compulsive gambler and know that there's not much change out of £30,000. It has made life very different.

It is sometimes said that compulsive gamblers take their second eager step down the road to ruin as the result of their first step having been fatally successful. Maybe — but don't assume that gamblers gamble simply because they want to win money, still less because they expect to. It is much more complicated than that. Most gamblers don't believe that,they will win — only that they will have wins. They are not even particularly greedy people. They are driven by other compulsions.

It was during that year, 1966, that a schoolfriend and I decided to give the Saturday afternoon cricket match a miss and to scooter over to Sandown Park instead. We went into the cheap enclosure in the centre of the course and stood against the white running-rail not far from the winning post and heard the noise of galloping hooves, the whips and shouts and rub of leather drividg for the finish. Lester Piggott was there. So were the horses which, until then, had just been black type on the inside back page of the daily newspapers. So were we. Part of this special world. I can't remember exactly when gambling stopped being a casual pleasure and be- came a thought-occupying need. When I arrived at Cambridge University the first thing that I did was to walk the streets looking for a betting shop. My feet ached before I found one. I've never known a town like it for the lack of them. When I visited Cambridge recently I noticed a Ladbrokes in the town centre. For better, for worse, and so on.

Since then, I've spent a lot of time in smoke-packed betting shops. They are a world apart: self-contained, a secret re- vealed only to devotees. Sad, futile, self- destructive but escape, adrenalin, cross- word puzzle challenge.

When you enter this world you shut out the world outside. The focus of your attention narrows. Strangely, you feel se- cure. There is a sense of belonging. You are in the company of other people but they make no demands on you.

It is a regulated environment where thoughts of other, more threatening, en- vironments are dulled. There is a cycle of arousal, although excitement would be the wrong word to use. When I win, the money is an anticlimax. The adrenalin, taking the risk, that is the thing. Perhaps it is also a way of making a statement about the value of money and about the values that people display in their dealings with it. For what could be more political than money?

And when I lose? Well, like a heroin addict, I have developed a tolerance for it. Just as joggers, gaining fitness, recover more quickly after each run, so compulsive gamblers acquire the resilience to sustain losses which once would have taken them a long time to come to terms with. Runners step up their distance, compulsive gamb- lers raise the stakes.

At Cambridge, I was almost always broke — almost always have been ever since. Betting losses increased to absorb all available funds, and then some. Income of any size could always be accommodated. No sum was so large that it could not be disposed of, sooner rather than later.

When other poeple complained that they were broke, they seemed to mean that they had very little money available without breaking into their savings. That wasn't broke to me. Broke was when you had nothing, anywhere, in cash or in kind, and, though there was pay day, it was weeks away. Later, the definition took a turn for the worse. Broke was when you owed money to bookmakers, banks and finance houses. Somehow life went on, more or less.

I spent a small part of my income on necessities but not on many of the items that figure in typical household budgets. Not on clothes, or holidays or 'things for the house'. Instead, the money was de- voted (the word is well chosen) to gamb- ling. There wasn't room to think about other things. Gambling destroys one's sense of the value of money. After losing tens of pounds, I have found myself walking home in order to save the bus fare. No number of small economies can make good a single afternoon's heavy losses, so that shopping around for a cheaper brand of coffee seems like pointless self-mockery.

It can be painful to be brought up against this gambling-induced insensitivity to the value of money. I remember my wife joyfully telling me that she had saved £3 in a sale. Earlier that day, in the space of two minutes, I had lost £30.

There is a bill to pay but you have no money to pay it with, for the one reason that you feel unable to own up to. So you leave it for your wife to pay. You are not mean by nature but you feel mean and, with more justification, selfish.

Some people say that they gamble to be sociable, but compulsive gambling is an isolating preoccupation. It excludes other people because to involve them is to hamper the activity. Compulsive gamblers need time and money and they can be resourceful in gaining access to both. You need time to study the form and time to place the bets and time to hear or to watch the races. Time on your own. Other interests — and other people — get in the way and they are manipulated or neg- lected.

Take Saturdays. Saturdays are days when couples tend to do things together or with friends or relatives. They go out. Saturday is also the busiest race day and often the only day when racing is televised. There was a time when, by pressing the right buttons, you could watch ten or eleven races on television. That meant that going out on a Saturday afternoon, unless it was to a racecourse, was a non-starter. So was having visitors. For years, Saturday was sacrosanct. 'Five days shalt thou labour, and do all thy work: but the sixth day shalt thou keep holy, study the Sport- ing Life and watch the racing.'

Truthfulness falls early victim to gamb- ling. All heavy gamblers lie. This is not to say that gamblers share lying as a character trait. They are not liars in the sense that individuals are boastful or modest, coward- ly or courageous. They lie because they gamble, in the same way that drug addicts and alcoholics lie because of their addic- tions. It is a symptom of the condition.

Gamblers lie about time and money. You cannot tell the truth about winning bets any more than you can tell the truth about losing ones. To tell prudent, non- gambling friends and relatives that you have just won £300 is to invite the inevit- able question, 'How much did you have to put on to win that amount of money?' quickly followed by, 'How often do you do this?' Worse still, it encourages the assumption that you are doing very nicely. Painful, that one.

So you become adept at hiding the wins and the losses. I have sat on a sofa and watched a horse that I had backed to win £400 get beaten by a short head and my sofa partner was not even aware that I had had a bet. I have walked from the tele- phone, clutching the knowledge of a dread- ful loss, back to work, to colleagues and, somehow, have behaved as if I had just returned from an uneventful visit to the toilet.

Today I need cash. I need cash because I want (need) to back a particular horse in the 4.30 at Ripon. I need quite a lot of cash because to put a small amount of money on this animal would be even worse than not to back it at all. I would rather will it to lose than see it win at 10-1 and have had only £2 on it.

But I have no cash and I have no money in the bank; I am overdrawn. However, for the time being, I have a cheque card which provides instant access to another £50 which I do not have. Then there is my Servicetill card, also for the time being. You push it into one slot and it pushes £100 out of another. Between Saturday and Monday it reprogrammes itself for another shoot.

I have reached my weekly Servicetill limit. The machine accepts Access cards too. Then there are the credit accounts with bookmakers. Juggling with the va- rious accounts. Using this one, because it is not yet up to your credit limit. Using that one, because it is over the limit and you hope to bring it down. Or use another, because settlement day is further away, the reminders less imminent. Miss a settlement date and hope to replace a minus figure with a plus one before the next accounting period ends and the letters begin.

For when you are in it up to your eyebrows it is not difficult to come to terms with the risk of sinking to your hairline. How else are you to crawl to solvency if not by a run of successful 4.30s at Ripon, or Catterick or Wolverhampton?

Eventually, the bank calls you in, along with your cards. Loans are restructured. You make arrangements with the book- makers. You have nothing and spreading out into a future of dull good behaviour lies an eternity of repayments. If there is a patch of blue sky on the horizon it is too far away to be of much comfort. There is no way that you can recover, unless of course .... For like, alcoholics, you are not cured, just in remission. If you write about it you interchange 'you' and 'I' and squirm between the past and present tenses.

I was told that my grandfather gambled. He would go out with his pay packet, come back, spread out his hands and say, 'All gone.' That is how I feel, sometimes — 'All gone.'