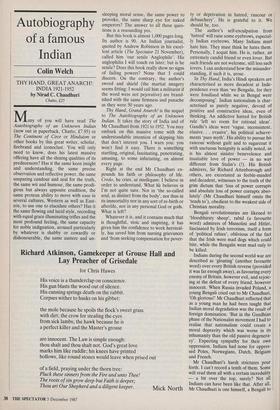 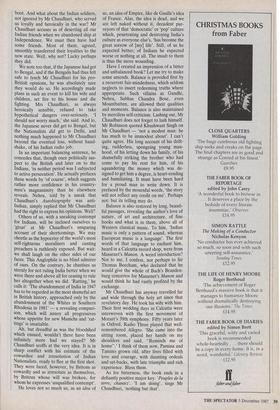 Autobiography of a famous Indian

THY HAND, GREAT ANARCH!: INDIA 1921-1952 by Nirad C. Chaudhuri Chatto, £25 Many of you will have read The Autobiography of an Unknown Indian (now out in paperback, Chatto, £7.95) or The Continent of Circe or Hinduism or other books by this great writer, scholar, firebrand and iconoclast. You will only need to know, does his latest massive offering have all the shining qualities of its predecessors? Has it the same keen insight and understanding, the same precise observation and reflective power, the same unsparing candour and zeal for the truth, the same wit and humour, the same prodi- gious but always apposite erudition, the same protean ability to move with ease in several cultures, Western as well as East- ern, to use one to elucidate others? Has it the same flowing and lucid style, recording with equal grace illuminating trifles and the most profound feeling, the same capacity for noble indignation, aroused particularly by whatever is shabby or cowardly or dishonourable, the same austere and un- sleeping moral sense, the same power to provoke, the same sharp eye for naked emperors? The answer to all these ques- tions is a resounding yes.

But this book is almost 1,000 pages long. Its author is 90. An Indian journalist, quoted by Andrew Robinson in his excel- lent article (The Spectator 21 November), called him 'our senile Anglophile'. His anglophilia I will touch on later; but is he senile? Does this book really show no signs of failing powers? None that I could discern. On the contrary, the author's sword and shield (the martial imagery seems fitting: I would call him a militarist if the word were not pejorative) are brand- ished with the same firmness and panache as they were 50 years ago.

Thy Hand, Grand Anarch! is the sequel to The Autobiography of an Unknown Indian. It takes the story of India and of Mr Chaudhuri from 1921 to 1952. You may embark on this massive tome with the understandable intention of skipping bits that don't interest you. I warn you: you won't find it easy. There is something startling, original, fascinating, penetrating, amusing, to some infuriating, on almost every page.

Right at the end Mr Chaudhuri ex- pounds his faith or philosophy of life. Credo, he cries, ut intellegam: I believe in order to understand. What he believes in I'm not quite sure. Not in 'the so-called soul, as distinct from the body', nor thus in its immortality nor in any sort of re-birth or afterlife, nor in any personal God or gods. What is left?

Whatever it is, and it contains much that is thoughtful, stoic and inspiring, it has given him the confidence to work heroical- ly, has saved him from nursing grievances and 'from seeking compensation for pover- ty or deprivation in hatred, rancour or debauchery'. He is grateful to it. We should be, too.

The author's self-exculpation from `hatred' will raise some eyebrows, especial- ly Indian eyebrows. Many Indians must hate him. They must think he hates them.

Personally, I acquit him. He is, rather, an extremely candid friend or even lover. But such friends are not welcome, still less such lovers. I can understand how the misunder- standing, if such it is, arose.

In Thy Hand, India's Hindi speakers are characterised as more decadent at Inde- pendence even than 'we Bengalis, for they were fossilised while we in Bengal were decomposing'. Indian nationalism is char- acterised as purely negative, devoid of positive and constructive ideas, even of thinking. An addictive hatred for British rule 'left no room for rational ideas'.

Gandhi's ideas were 'vague, inconsistent, elusive. . . evasive', his political achieve- ments 'pure myth'. His ability to pursue his rancour without guilt and to sugarcoat it with unctuous benignity is acidly noted, as is his almost sinister benevolence and insatiable love of power — in no way different from Stalin's (!). His British admirers, Sir Richard Attenborough and others, are excoriated as feeble-minded and decadent, witnesses to the truth of the grim dictum that 'loss of power corrupts and absolute loss of power corrupts abso- lutely' (Mr Chaudhuri himself omits the `tends to'), obedient to the weakest side of Christian morality.

Bengali revolutionaries are likened to `bloodthirsty sheep', rabid (a favourite word) admirers of Mussolini and Hitler, fascinated by Irish terrorism, itself a form of 'political rabies', oblivious of the fact that the Irish were mad dogs which could bite, while the Bengalis went mad only to be killed.

Indians during the second world war are described as 'gloating' (another favourite word) over every British reverse (provided it was far enough away), as favouring every enemy of Britain, however evil, and rejoic- ing at the defeat of every friend, however innocent. When Russia invaded Poland, a young Bengali cried out to Mr Chaudhuri, `Oh glorious!' Mr Chaudhuri reflected that as a young man he had been taught that Indian moral degradation was the result of foreign domination. 'But in the Gandhian phase of the Nationalist movement I had to realise that nationalism could create a moral depravity which was worse in its inhumanity than the old passive degenera- cy'. Expecting sympathy for their own oppression, Indians had none for oppres- sed Poles, Norwegians, Dutch, Belgians and French.

Mr Chaudhuri's harsh strictures pour forth. I can't record a tenth of them. Some will read them all with a certain incredulity — a bit over the top, surely? Not all Indians can have been like that. After all, Mr Chaudhuri is one himself, a Bengali to boot. And what about the Indian soldiers, not ignored by Mr Chaudhuri, who served us loyally and heroically in the war? Mr Chaudhuri accuses us of deserting all our Indian friends when we abandoned ship at Independence. We must then have had some friends. Most of them, agreed, smoothly transferred their loyalties to the new state. Well, why not? Lucky perhaps they did.

We note too that, if the Japanese had got to Bengal, and if the Bengalis had thus felt safe to lynch Mr Chaudhuri for his pro- British opinions, he was absolutely sure they would do so. He accordingly made plans in such an event to kill his wife and children, set fire to his house and die fighting. Mrs Chaudhuri, as always heroically sensible, refused to take hypothetical dangers over-seriously. 'I should not worry much,' she said. And lo, the Japanese never did get to Bengal, but the Nationalists did get to Delhi, and nothing much happened to Mr Chaudhuri beyond the eventual loss, without hand- shake, of his Indian radio job.

In an important balancing sentence, he concedes that, though once politically sus- pect to the British and later on to the Indians, 'in neither period was I subjected to active persecution'. He actually prefaces these words by 'of course', which suggests rather more confidence in his country- men's magnanimity than he elsewhere reveals. Nehru, told by 'a sneak that Chaudhuri's Autobiography was anti- Indian, simply replied that Mr Chaudhuri had the right to express his opinions. Well?

Others of us, with a sneaking contempt for Indians, will be inclined ourselves to `gloat' at Mr Chaudhuri's unsparing account of their shortcomings. We may chortle as the hypocrisy of the world's most self-righteous moralisers and canting preachers is ruthlessly exposed. But wait: we shall laugh on the other sides of our faces. This Anglophile is no blind admirer of ours. On the contrary, he chastises us sternly for not ruling India better when we were there and above all for ceasing to rule her altogether when we did. 'Ratting,' he calls it: 'The abandonment of India in 1947 has to be regarded as the most shameful act in British history, approached only by the abandonment of the Whites in Southern Rhodesia in 1981' — a revealing compari- son, which will annoy all progressives whose appetite for new Munichs and 'rat- tings' is insatiable.

Ah, but dreadful as was the bloodshed which ensued, wouldn't there have been infinitely more had we stayed? Mr Chaudhuri scoffs at the very idea. It is in sharp conflict with his estimate of the cowardice and irresolution of Indian Nationalists, ready to flee at the first shot. They were faced, however, by Britons as cowardly and as irresolute as themselves, by Britons whose will was broken, for whom he expresses 'unqualified contempt'.

He loves not so much us, as an idea of us, an idea of Empire, like de Gaulle's idea of France. Alas, the idea is dead, and we are left naked without it, decadent pur- veyors of that 'democratic' or 'pop' culture which, penetrating and destroying India's culture as everyone else's, 'has become the great sorrow of [my] life'. Still, of us he expected better; of Indians he expected worse or nothing at all. The insult to them is thus the more wounding.

Have I created an impression of a bitter and unbalanced book? Let me try to make some amends. Balance is provided first by a recurrent fair-mindedness, which seldom neglects to insert redeeming truths where appropriate. Such villains as Gandhi, Nehru, Subhas Chandra Bose, even Mountbatten, are allowed their qualities and moments. Balance is also maintained by merciless self-criticism. Lashing out, Mr Chaudhuri does not forget to lash himself. Mr Robinson quoted Khushwant Singh on Mr Chaudhuri — 'not a modest man: he has much to be immodest about'. I can't quite agree. His long account of his drift- ing, rudderless, spongeing young man- hood, of his letting down his family, of his shamefully striking the brother who had come to pay his rent for him, of his squandering the money which was de- signed to get him a degree, is heart-rending and humiliating. It must have been hard for a proud man to write down. It is prefaced by the mournful words, 'the story will not reflect any credit on me'. Perhaps not: but its telling may do.

Balance is also restored by long, beauti- ful passages, revealing the author's love of nature, of art and architecture, of fine books and what is in them, above all of Western classical music. To him, 'Indian music is only a pattern of sound, whereas European music is a language'. The first words of that language to enchant him, heard in a Calcutta record shop, were from Massenet's Manon. A weird introduction? Not to me, I confess, nor perhaps to Sir Thomas Beecham, who declared that he would give the whole of Bach's Branden- burg concertos for Massenet's Manon and would think he had vastly profited by the exchange.

Mr Chaudhuri has anyway travelled far and wide through the holy art since that revelatory day. He took his wife with him. Their first wedding days in Calcutta were interwoven with the first movement of Mozart's 39th symphony. Fifty years later in Oxford, Radio Three played that well- remembered Allegro. 'She came into the sitting room, placed her hands on my shoulders and said, "Reminds me of home".' I think of them now, Pamina and Tamino grown old, after lives filled with love and courage, with daunting ordeals and set-backs, with late triumphs and rich experience. Bless them.

As for bitterness, the book ends in a defiantly positive major key. 'Peuples de la terre, chantez'. 'I am doing', sings Mr Chaudhuri, 'nothing but that'.