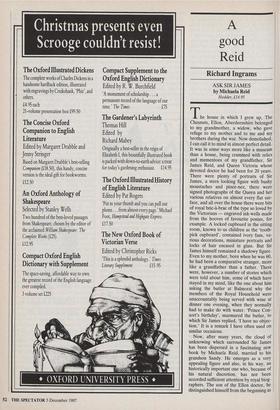 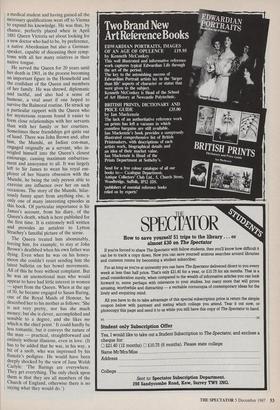 The house in which I grew up, The Chesnuts, Ellon, Aberdeenshire belonged to my grandmother, a widow, who gave refuge to my mother and to me and my brothers during the war. Now demolished, I can call it to mind in almost perfect detail. It was in some ways more like a museum than a house, being crammed with relics and mementoes of my grandfather, Sir James Reid, and Queen Victoria whose devoted doctor he had been for 20 years. There were plenty of portraits of Sir James, a stern looking figure with bushy moustaches and pince-nez, there were signed photographs of the Queen and her various relatives on almost every flat sur- face, and all over the house there were bits of royal bric-a-brac of the type so loved by the Victorians — engraved ink-wells made from the hooves of favourite ponies, for example. A locked cupboard in the sitting room, known to us children as the 'tooth- pick cupboard', contained ivory fans, va- rious decorations, miniature portraits and locks of hair encased in glass. But Sir James himself remained a shadowy figure. Even to my mother, born when he was 60, he had been a comparative stranger, more like a grandfather than a father. There were, however, a number of stories which were told about him, some of which have stayed in my mind, like the one about him asking the butler at Balmoral why the members of the Royal Household were unaccountably being served with wine at dinner one evening, when they normally had to make do with water. 'Prince Con- sort's birthday', murmured the butler, to which Sir James replied, 'I have no objec- tion.' It is a remark I have often used on similar occasions.

Now, after many years, the cloud of unknowing which surrounded Sir James has been dispersed in a fascinating new book by Michaela Reid, married to his grandson Sandy. He emerges as a very appealing figure and also, in his way, an historically important one who, because of his natural discretion, has not been accorded sufficient attention by royal biog- raphers. The son of the Ellon doctor, he distinguished himself from the beginning as a medical student and having gained all the necessary qualifications went off to Vienna to expand his knowledge. He was thus, by chance, perfectly placed when in April 1881 Queen Victoria set about looking for a new doctor who had to be, by preference, a native Aberdonian but also a German- speaker, capable of discussing their symp- toms with all her many relatives in their native tongue.

He served the Queen for 20 years until her death in 1901, in the process becoming an important figure in the Household and the confidant of the Queen and members of her family. He was shrewd, diplomatic and tactful, and also had a sense of humour, a vital asset if one hoped to survive the Balmoral routine. He struck up a particular rapport with the Queen who for mysterious reasons found it easier to form close relationships with her servants than with her family or her courtiers. Sometimes these friendships got quite out of hand. There was John Brown and, after him, the Munshi, an Indian con-man, engaged originally as a servant, who in- veigled himself into the Queen's closest entourage, causing maximum embarrass- ment and annoyance to all. It was largely left to Sir James to wean his royal em- ployer of her bizarre obsession with the Munshi, he being the only person able to exercise any influence over her on such occasions. The story of the Munshi, hilar- iously funny apart from anything else, is only one of many interesting episodes in this book. Of particular importance is Sir James's account, from his diary, of the Queen's death, which is here published for the first time. It is extremely well written and provides an antidote to Lytton Strachey's fanciful picture of the scene.

The Queen treated him abominably, forcing him, for example, to, stay at John Brown's deathbed when his own father was dying. Even when he was on his honey- moon she couldn't resist sending him the latest bulletin on her bowel movements. All of this he bore without complaint. But he was an unemotional man who would appear to have had little interest in women — apart from the Queen. When at the age of 50, he became engaged to Susan Baring, one of the Royal Maids of Honour, he described her to his mother as follows: 'She is not very pretty, nor has she much money; but she is clever, accomplished and sensible to a degree, and she likes me which is the chief point.' It could hardly be less romantic, but it conveys the nature of the man — practical, straightforward and entirely without illusions, even in love. (It has to be added that he was, in his way, a bit of a snob, who was impressed by his fiancee's pedigree. He would have been deeply shocked by the view of Jane Welsh Carlyle: 'The Barings are everywhere. They get everything. The only check upon them is that they are all members of the Church of England, otherwise there is no saying what they would do.')