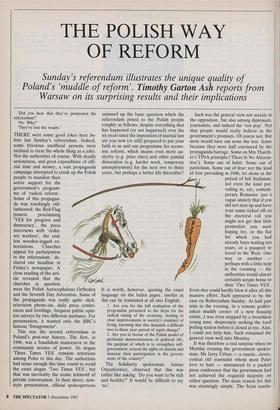 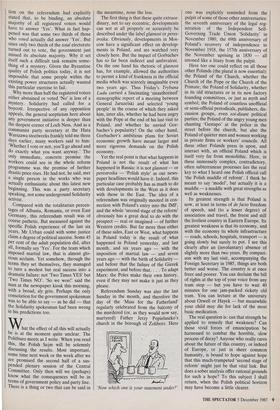 THE POLISH WAY OF REFORM

Did you hear that they've postponed the referendum?'

THERE were some good jokes here be- fore last Sunday's referendum. Indeed, some frivolous unofficial persons were inclined to treat the whole thing as a joke. Not the authorities of course. With deadly seriousness, and great expenditure of offi- cial time and money, a vast propaganda campaign attempted to crank up the Polish people to manifest their active support for the government's program- me of 'radical reform'. Some of this propagan- da was touchingly old- fashioned: the Red-Flag This was the second referendum in Poland's post-war history. The first, in 1946, was a fraudulent manoeuvre in the communist seizure of power. Its slogan `Three Times YES' remains notorious among Poles to this day. The authorities had sense enough this time round to avoid the exact slogan 'Two Times YES', but that was inevitably the ironic leitmotif of private conversation. In their direct, new- style presentation, official spokespersons summed up the basic question which the referendum posed to the Polish people roughly as follows: despite everything that has happened (or not happened) over the six years since the imposition of martial law are you now (or still) prepared to put your faith in us and our programme for econo- mic reform, which means even more au- sterity (e.g. price rises) and other painful dislocation (e.g. harder work, temporary unemployment) for the next two to three years, but perhaps a better life thereafter?

It is worth, however, quoting the exact language on the ballot paper, insofar as this can be translated at all into English:

1. Are you for the full realisation of the programme presented to the Sejm for the radical curing of the economy, leading to clear improvements in society's standard of living, knowing that this demands a difficult two-to-three year period of rapid change?

2. Are you in favour of the Polish model of profound democratisation of political life, the purpose of which is to strengthen self- government, extend the rights of citizens and increase their participation in the govern- ment of the country?

The Solidarity spokesman, Janusz Onyszkiewicz, observed that this was rather like asking: `Do you want to be rich and healthy?' It would be difficult to say 'no'. perhaps with a little help in the counting — the authorities would almost certainly scrape home to their 'Two Times YES'. Even they could hardly blow it after all this massive effort. Such appeared to be the case on Referendum Sunday. At half past nine in the evening, in a remote godfor- saken muddy corner of a new housing estate, I was even stopped by a breathless young man, desperately seeking the local polling station before it closed at ten. Alas, I could not help him. Such remained the general view well into Monday.

It was therefore a real surprise when on Monday evening the government spokes- man, Mr Jerzy Urban — a caustic, clever, cynical old journalist whom most Poles love to hate — announced to a packed press conference that the government had not achieved the required majority on either question. The main reason for this was stunningly simple. The Sejm reso u- tion on the referendum had explicitly stated that, to be binding, an absolute majority of all registered voters would have to answer 'Yes'. What in fact hap- pened was that some two thirds of those who voted actually did answer 'Yes'. But since only two thirds of the total electorate turned out to vote, the government just missed its absolute majority. Why it set itself such a difficult task remains some- thing of a mystery. Given the Byzantine quality of Polish politics today, it is not impossible that some people within the existing power structures actually wanted this particular exercise to fail.

Why more than half the registered voters either abstained or voted 'No' is less of a mystery. Solidarity had called for a boycott. Irrespective of any opposition appeals, the general scepticism here about any government initiative is deeper than the deepest corner of Loch Ness. And as a communist party secretary at the Huta Warszawa steelworks frankly told me three days earlier, many workers said to him: `Whether I vote or not, you'll go ahead and do exactly what you want anyway.' The only immediate, concrete promise the workers could see in the whole reform programme was the promise of further drastic price rises. He had not, he said, met a single person in the works who was actually enthusiastic about this latest new beginning. This was a party secretary speaking, not some underground Solidarity activist.

Compared with the totalitarian percen- tages of Albania, Romania, or even East Germany, this referendum result was of course pathetic. But measured against the specific Polish experience of the last six years, Mr Urban could with some justice claim a degree of political success. Some 45 per cent of the adult population did, after all, formally say 'Yes'. For the team which imposed martial law, that is almost glo- rious acclaim. Yet somehow, through the terms they set themselves, they managed to turn a modest but real success into a dramatic failure: not 'Two Times YES' but `Two Times NO'. 'So we won!' said the man at the newspaper kiosk this morning, with a broad, sly grin. Perhaps the only consolation for the government spokesman was to be able to say — as he did — that the Solidarity spokesman had been wrong in his predictions too.

hat the effect of all this will actually be is at the moment quite unclear. The Politburo meets as I write. When you read this, the Polish Sejm will be solemnly discussing the results. Most important, some time next week or the week after we are promised the second half of a sus- pended plenary session of the Central Committee. Only then will we (perhaps) know what the consequences will be in terms of government policy and party line. There is a thing or two that can be said in the meantime, none the less.

The first thing is that these quite extraor- dinary, not to say eccentric, developments can not at all properly or accurately be described under the label glasnost or peres- troika. Obviously, developments in Mos- cow have a significant effect on develop- ments in Poland, and are watched very closely here. But the impact of Gorbachev has so far been indirect and ambivalent. On the one hand his rhetoric of glasnost has, for example, allowed the authorities to permit a kind of frankness in the official media which was scarcely imaginable even two years ago. Thus Friday's Trybuna Ludu carried a fascinating 'unauthorised' stenographic report of a meeting between General Jaruzelski and selected 'young people' in the course of which they asked him, inter alia, whether he had been angry with the Pope at the end of his last visit to Poland, and whether he envied Gor- bachev's popularity! On the other hand, Gorbachev's ambitious plans for Soviet economic growth have meant larger and more rigorous demands on the Polish economy.

Yet the real point is that what happens in Poland is not the result of what has happened in Russia: it is not glasnost — or perestroika — 'Polish style' as our news- paper headlines would have it. Indeed, this particular case probably has as much to do with developments in the West as it does with those in the East. The idea of a referendum was originally mooted in con- nection with Poland's entry into the IMF, and the whole 'second stage of the reform' obviously has a great deal to do with the prospect — real or imagined — of further Western credits. But far more than either of these sides, East or West, what happens in Poland today is the result of what happened in Poland yesterday, and last month, and six years ago — with the imposition of martial law — and seven years ago — with the birth of Solidarity and before that the failure of the Gierek experiment, and before that. . . . To adapt Marx: the Poles make their own history, even if they may not make it just as they please.

Referendum Sunday was also the last Sunday in the month, and therefore the day of the 'Mass for the Fatherland' regularly celebrated from the balcony of the murdered (or, as they would now say, martyred) Father Jerzy Popieluszko's church in the borough of Zoliborz. Here Wow which one is your statement under?' one was explicitly reminded from the pulpit of some of those other anniversaries: the seventh anniversary of the legal reg- istration of the Independent Self- Governing Trade Union 'Solidarity' in November 1980, the 69th anniversary of Poland's recovery of independence in November 1918, the 157th anniversary of the November uprising in 1830 — all intoned like a litany from the pulpit.

Here too one could reflect on all those other Polands (the plural is now essential): the Poland of the Church, whether the Church of the Pope or the Church of the Primate; the Poland of Solidarity, whether in its old structures or in its new factory founding committees, or just as myth and symbol; the Poland of countless unofficial or semi-official periodicals, publishers, dis- cussion groups, even soi-disant political parties; the Poland of the angry young men chanting 'Gestapo' at the police in the street before the church, but also the Poland of quieter men and women working in private firms or workers' councils. All these other Polands press in upon, and interact with, an official Poland which is itself very far from monolithic. Here, in these immensely complex, contradictory, often subterranean processes lies the real key to what I heard one Polish official call `the Polish muddle of reform'. I think he meant to say 'model', but actually it is a muddle — a muddle with great strengths as well as weaknesses.

Its greatest strength is that Poland is now, at least in terms of de facto freedom of speech, and (to a lesser degree) of association and travel, the freest and still the liveliest country in Eastern Europe. Its greatest weakness is that its economy, and with the economy its whole infrastructure — roads, schools, hospitals, transport — is going slowly but surely to pot. I see this clearly after an (involuntary) absence of slightly more than two years. By compari- son with my last visit, accompanying the Foreign Secretary in 1985, things are both better and worse. The country is at once freer and poorer. You can declaim the bill of rights at the top of your voice from any tram stop — but you have to wait 40 minutes for one jam-packed rickety old tram. You can lecture at the university about Orwell or Hayek — but meanwhile your child may die for lack of the most basic medication.

The real question is: can that strength be applied to remedy that weakness? Can those vivid forces of emancipation be harnessed to combat the horrible, slow process of decay? Anyone who really cares about the future of this country, or indeed of Europe, or just in sheer common humanity, is bound to hope against hope that this much-trumpeted 'second stage of reform' might just be that vital link. But does a sober analysis offer rational grounds for such a hope? To this subject I shall return, when the Polish political horizon may have become a little clearer.