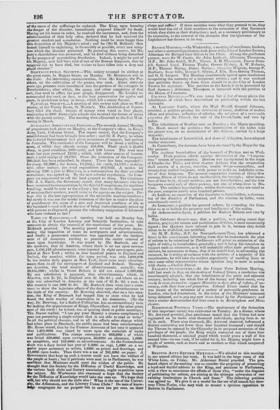 Page 6, 5 February 1831 — REFORM MEETINGS.—On Wednesday, a meeting of merchants, bankers, and other
Close

REFORM MEETINGS.—On Wednesday, a meeting of merchants, bankers, and other

cemmercial gentlemen, took place at the City of London Tavern; Alderman Sir Richard Carr Glynn in the Chair. Among the gentlemen present, were Sir W. Curtis, Sir John Lubbock, Alderman Thompson, M.P., Mr. John Smith, M.P., Messrs. A. H. Thompson, Pascoe Grea- ten, Samuel Loyd, Thomas Tooke, George Hibbert, A. W. Robarts, M.P., Thomas Baring, James Barnett, Octavius Wigram, George P. Banbury, Isaac Solly, George C. Glynn, J. Ede, Rees Goring Thomas, and G. G. Lament. The Meeting unanimously agreed upon resolutions recognizing the necessity of a temperate reform ; and it was resolved. that petitions drawn up from them should lie at the City of London Tavern for signature. The petition to the Lords is to be presented by Earl Spencer ; Alderman Thompson is intrusted with the petition to the House of Commons.

COUNTRY MEaTiNas.—We can name but a few of many places the inhabitants of which have determined on petitioning within the last fortnight.

At Lancaster Castle, where the High Sheriff, General Johnson, presided, a petition praying for remission of taxes, abolition of useless offices and pensions, reiluction of salaries, the wi,ption of a reasonable imvision for the Church, the sale of the Crown lands, and vote by The inhabitants of Reading met on Tuesday ; the Mayor presiding. Mr. Monk moved the petition ; the introduction of the ballot into the prayer was, on an amendment of Mr. Salmon, carried by a large majority. The inhabitants of Lostwithiel, and those of Abingdon, have adopted. similar measures.

At Canterbury, the freemen have been convened by the Mayor for the like purpose.

The resident householders of the borough of Devizes met on Wed. nesdam Their petition affords another illustration of the " Corpora- tion" system of representation. Devizes was incorporated in the reign of Charles the First ; and their charter declares that the corporation shall consist of a mayor, recorder, twelve burgess-counsellors, and twenty-four capital burgesses, with .power to make an indefinite num- ber of free burgesses. The present corporation consists of thirty-five persons, fifteen of whom do not reside within the borough ; other menu- hers of that body, though resident, are not householders; and the free burgesses consist only of three persons not one of whom lives in De- vizes. The resident householders, within the borough, who are rated to the poor, comprise nearly nine hundred persons.

At Ludlow, an extension of the franchise to householders, a shorten- ing of the duration of Parliament, and the election by ballot, were unanimously carried.

At Lancaster, a petition for general reform, by extending the fran- chise so as to include the property and intelligence of the nation. At Ashton-under-Lyne, a petition for Radical Reform and vote by ballot.

The Colchester Gazette says, that a petition, now going round that district, praying for reform and modification of tithes, is most numerously signed : the Quakers have refused to join in it, because they desire tithes to be abolished, not modified.

Sir 31. W. Ridley, M.P. foe Newcastle-upon-Tyne, has addressed a letter to his constituents, informing them that he understands the plan of reform to be submitted to Parliament will grant an extension ot the right of voting to householders generally ; and it being his intention to support such an extension, as it will materially affect their privileges as electors, he announces to them, that if he should find, in advocating the measure, he is actineb at variance with the opinions of a majority of hie constituents, he will take the earliest opportunity of enabling 'them to elect some other representative whose opinions may be more in unison with theirs —Carlisle Patriot.

ZEALOUS SU PPOILTE RS.—At the Cinque Ports Reform Meeting, held last week in Rye, on the motion of Colonel Evans, a resolution was unanimously adopted, that the inhabitants of the ports and adjacent country, including the wholeline of the Sussex and Kent coasts were ready to come forward to support Ministers in their plan of reform, ne- cessary, with their lives and properties. Colonel' Evans stated that he was aware of the existence of a society of mercantile gentlemen in London, who had determined, in the event of the Ministers' measures being defeated, not to pay any new taxes levied by the Parliament; and that a similar determination had been come to in. Birmingham and Man. chafer.

BIR3IINGRADI POLITICAL UNION.—The anniversary of the formation of this important society was celebrated on Tuesday. At a dinner, where Mr. Attwood presided, mhat gentleman stated that the Union had now registered on its books nine thousand individuals, paying from 4s. to 2/. 2s. each. These nine thousand, Mr. Attwood observed, influenced a district containing not fewer than four hundred thousand ; and should the Throne be opposed by the Oligarchy in its purposed extension of the privileges of the people, the King might command out of these four hundred thousand, a national guard which would prove a wan of fire around him—in one week, if he called for it, his Majesty might have a couple of armies, each as brave and as resolute as that which conquered at Waterloo.