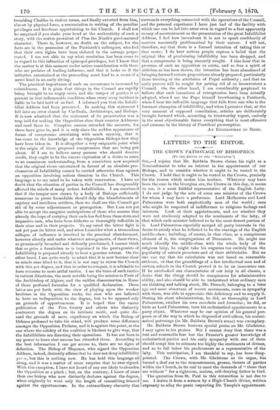 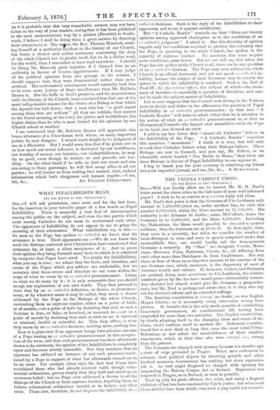 THE CROWN PATRONAGE OF BISHOPRICS.

[TO THE EDITOR OF THE SPECTATOR:]

SIR,—I rejoice that Mr. Baldwin Brown claims his right as a Nonconformist to take an interest in the appointment of our Bishops, and to consider whether it ought to be vested in the Crown. I hold that it ought to be vested in the Crown, precisely for the reason which makes him hesitate. Whatever may have been the case in the Georgian era, the Crown in this day, it seems to me, is a most faithful representative of the English Laity. I do not judge by the acts of some one minister of the Crown for whom I may have a preference. Lord Melbourne and Lord Palmerston were both emphatically men of the world ; men who might be suspected of indifference to religious feelings and interests. Look at their appointments, and see whether they were not studiously adapted to the sentiments of the laity, of that which each minister believed to be the most devout portion of it. Lord Palmerston especially merged all party interests in the desire to satisfy what he believed to be the cravings of the English middle-class ; including, of course, in that class, as a conspicuous element of it, the congregations of Dissenters. He might too much identify the middle-class with the whole body of the religious laity, he might take his auguries too entirely from the popularity of certain preachers and of their shibboleths. But no one can say that his calculation was not based on reasonable evidence, or that the grumblings of a few intellectual men and of certain schools in the Church proved it to be an inaccurate one. If he overlooked one characteristic of our laity in all classes, a desire that the clergy should be conspicuous for administrative ability, and also should be able to understand what ordinary men are thinking and talking about, Mr. Disraeli, belonging to a later age and more observant of recent movements, more in sympathy with them, was able to appreciate this deficiency and to supply it. During his short administration, he did, as thoroughly as Lord Palmerston, swallow his own crotchets and formulas ; he did, as little as Lord Palmerston, turn his ecclesiastical appointments to a party object. Whatever may be our opinion of his general pur- poses or of the way in which he disposed of civil offices, his ecclesi- astical patronage (in Mr. Baldwin Brown's sense) was exemplary.

Mr. Baldwin Brown bestows special praise on Mr. Gladstone. I may agree in his praises. But I cannot deny that there was a real and reasonable fear lest the Premier's greater knowledge of ecclesiastical parties and his early sympathy with one of them should tempt him to estimate too highly the sentiments of divines, and so to fall below his predecessors as a representative of the laity. This anticipation, I am thankful to say, has been disap- pointed. The Crown, with Mr. Gladstone as its organ, has turned a deaf ear to the remonstrances, groans, threats of parties within the Church, in its zeal to meet the demands of "those that are without" for a righteous, zealous, self-denying father in God.

The quotation from St. Paul in this connection is not due to me. I derive it from a sermon by a High-Church divine, written expressly to allay the panic respecting Dr. Temple's appointment. As it is probable that this very remarkable sermon may not have fallen in the way of your readers, seeing that it has been published in the most unostentatious way by a printer (Drewitt) in South- wark, I believe I shall be doing them a great service by directing their attention to it. The niter, the Rev. Thomas Hancock, avail- ing himself of a particular incident in the history of our Church, has borne a clearer and nobler testimony concerning the duty of the whole Church not to glorify itself, but to do a divine work for the world, than I remember to have read anywhere. I should be doing Mr. Hancock great injustice if I claimed him as an authority in favour of Crown appointments. If I may judge of his political opinions from one passage in his sermon, I should suppose that they were democratical rather than mon- archical. His ecclesiastical attachments would naturally lead him to be even more jealous of State interference than Mr. Baldwin Brown is. But his faith in God's promises, and his acquaintance with the history of the Church, have convinced him that one of the most indispensable canons for the choice of a Bishop is that which the Apostle has laid down ; that a man who has "a good report among them that are without" (if they are infidels, they answer to the literal meaning of the text), for justice and truthfulness, has higher claims than he who is most lauded for his opinions by one Church school or another.

I am convinced that Mr. Baldwin Brown will appreciate this brave utterance of a Churchman with whom, on many important points, he may disagree. I attach much weight to his judgment of me as a Dissenter. But I would warn him that if he points out to us how much our moral influence is destroyed by our worldliness, our worship of money, our injustice, our uncharitableness, he may do us good, even though he irritate us and provoke our hos- tility. On the other hand, if he tells us that our errors and sins are owing to State patronage, he will find many allies in all our parties ; he will hinder us from seeking that inward, vital, radical reformation which both clergymen and laymen require.—I am,