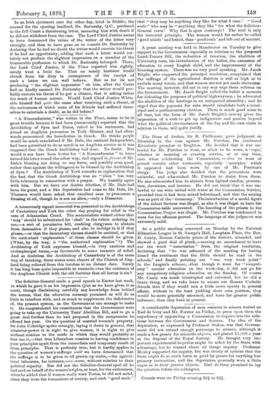 The Dean of Arches, Sir R. Phillimore, gave judgment on

Thursday in the case against Mr. Parches, the celebrated Ritualistic preacher at Brighton. He decided that it was un- lawful for Mr. Purchas to wear, or allow to be worn, a 'cope,' whether at morning or evening service, or at any time, save when celebrating the Communion, — also to wear or permit certain other vestments, especially maniples,' which it appeared had been worn by one of Mr. Purchaa's clergy. The judge also decided that the processions were unlawful, and admonished Mr. Parches to desist from them. He also admonished him to abstain from lighted candles, prostra- tion, elevations, and incense. He did not think that it was un- lawful to use wine mixed with water at the Communion Service, provided that it had been mixed beforehand, and that the mixing was no part of the ceremony.' The introduction of a model figure of the infant Saviour was illegal, as also it was illegal to have the Communion-table uncovered. The kneeling of the priests in the Consecration Prayer was illegal. Mr. Parches was condemned in costs for the offences proved. The language of the judgment was extremely mild.