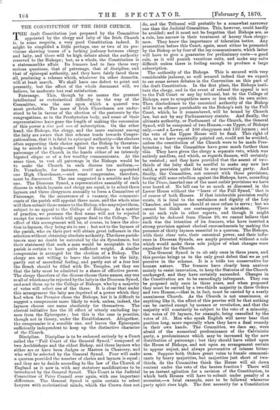 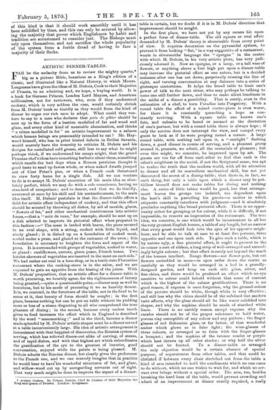 THE CONSTITUTION OF THE IRISH CHURCH.

THE draft Constitution just prepared by the Committee appointed by the clergy and laity of the Irish Church is, in some respects, a very good Constitution indeed. It

might be simplified a little perhaps, one or two of its pro- visions showing traces of a lurking jealousy between clergy and laity, and there will be high debate about the authority reserved to the Bishops ; but, as a whole, the Constitution is a statesmanlike affair. Its framers had to face three very serious questions, that of patronage, that of discipline, and that of episcopal authority, and they have fairly faced them all, producing a scheme which, whatever its other demerits, will at least march. We shall have one defect to point out presently, but the effect of the whole document will, we believe, be moderate but real satisfaction.

Patronage. This, though by no means the greatest intellectual or ecclesiastical difficulty in the way of the Committee, was the one upon which a quarrel was most probable. The mass of Irish Churchmen are under- stood to be in favour of the election of the pastorate by the congregations, as in the Presbyterian body, and some of their representatives have gone the length of making the concession of this power a sine qud non of subscription. On the other hand, the Bishops, the clergy, and the more eminent among the laity are aware that this scheme tends towards Congre- gationalism, that it is fatal to episcopal authority—the electors often supporting their choice against the Bishop by threaten- ing to secede in a body—and that its result is to vest the patronage of the Church in the hands either of an intensely bigoted clique or of a few wealthy communicants. At the

same time, to vest all patronage in the Bishops would be to make the Church in each diocese too uniform,—

Dr. Verschoyle, for instance, could not have appointed one High Churchman,—and some compromise, therefore, must be discovered. The one suggested is a sensible and fair one. The Diocesan Synod, a representative assembly of each diocese in which laymen and clergy are equal, is to select three laymen and three clergymen annually to form a Committee of Patronage. On the occurrence of a vacancy, the communi- cants of the parish will appoint three more, and the whole nine cviii then submit three names to the Bishop, who mayreject them, subject to an appeal to the College of Bishops. As a matter of practice, we presume the first name will not be rejected except for reasons which will appear final to the College. The effect of this arrangement will be, of course, to leave the elec- tion to laymen, they being six to one ; but not to the laymen of the parish, who on their part will obtain great influence in the selection without obtaining absolute authority. The three parish- ioners may no doubt be outvoted by the six Synodsmen, but their statement that such a man would be acceptable to the parish is certain to have quite sufficient weight. A similar compromise is arranged for the election of a Bishop. The clergy are not willing to leave the initiative to the laity, partly out of sacerdotal feeling, and partly out of a fear lest the Bench should be filled with Dr. Temples, yet they see that the laity must be admitted to a share of effective power. The clergy therefore of the diocese choose three names, any one orall of which maybe rejected bythe laityin the Diocesan Synod, and send them up to the College of Bishops, who by a majority of votes will select one of the three. It is clear that under this arrangement the laity are deprived of a power which they had when the Premier chose the Bishops, but it is difficult to suggest a compromise more likely to work, unless, indeed, the laymen choose one name absolutely for themselves. The clerical initiative has the ill effect of utterly excluding lay- men from the Episcopate ; but this is the case in practice, though not in theory, under the Establishment. Altogether, the compromise is a sensible one, and leaves the Episcopate sufficiently independent to keep up the distinctive character of the Church.

Discipline. Discipline is to be enforced entirely by a Court called the "Full Court of the General Synod," composed of two Archbishops and the oldest Bishop, and three laymen who either are or have been Judges or Masters in Chancery, and who will be selected by the General Synod. Four will make a quorum provided the number of clerics and laymen is equal ;

and they are to decide according to the law of the Church of England as it now is, with any statutory modifications to be

introduced by the General Synod. This Court is the Judicial Committee of Privy Council over again, with one important difference. The General Synod is quite certain to select lawyers with ecclesiastical minds, which the Crown does not do, and the Tribunal will probably be a somewhat narrower one than the Judicial Committee. This, however, could hardly be avoided; and it must not be forgotten that Bishops are, as a rule, less narrow in their treatment of heresy than clergy- men. They know the importance of toleration better. Any prosecution before this Court, again, must either be promoted by the Bishop or by four of the lay communicants, which latter will have to give a guarantee for preliminary costs—a good rule, as it will punish vexatious suits, and make any suits difficult unless there is feeling enough to produce a large subscription. The authority of the Bishops. This is secured with very considerable jealousy, so well secured indeed that we expect to see some severe debates in the Convention on this part of the draft Constitution. In the first place, the Bishops insti- tute the clergy, and in the event of refusal the appeal is not to the Full Court or any lay tribunal, but to the College of Bishops, sure to sympathize more or less with its own order. Then disobedience to the canonical authority of the Bishop will be an offence punishable on the Bishop's suit by the Full Court, which, be it remembered, will be bound by Church law, but not by any Parliamentary statute. And finally, the ultimate authority, or Parliament of the Church, the General Synod, will be composed of two Houses,—an Upper, of Bishops only,—and a Lower, of 100 clergymen and 150 laymen ; and the veto of the Upper House will be final. This right of veto, as we have repeatedly pointed out, could not be avoided, unless the constitution of the Church were to be made Pres- byterian; but the Committee have gone much further than this. They have given the clergy a separate veto, which was entirely needless, and which, as regards finance, will certainly be resisted ; and they have provided that the assent of two- thirds of the laity shall be needful to make any new law valid, a provision quite fatal to any innovating party. And finally, the Committee, not content with these provisions, fearing still some rebellion against the Bishops, have, according to the Times, inserted one of the most unfair provisions we have ever heard of. No bill can be so much as discussed in the Lower House without the "leave of the Full Synod," that is of course of both Houses. If that intolerable provision really exists, it is fatal to the usefulness and dignity of the Lay Chamber, and laymen should at once refuse to serve ; but we cannot but think our contemporary is mistaken. There is no such rule in other reports, and though it might possibly be deduced from Clause 20, we cannot believe that such was the intention of its framers, who have inserted a strong provision against clerical encroachments by making the presence of thirty laymen essential to a quorum. The Bishops, with their clear veto, their canonical power, and their influ- ence in Diocesan Synods, are amply protected without a rule which would make them sole judges of what changes were expedient for the Church.

The General Synod is to sit only once in three years, and this proviso brings us to the only great defect that we as yet perceive in the scheme. It is a trifle too conservative for human nature. The framers have clearly been anxious mainly to resist innovation, to keep the Statutes of the Church unchanged, and they have certainly succeeded. Changes in the Constitution are to be exceedingly infrequent. They can be proposed only once in three years, and when proposed they must be carried by a two-thirds majority in three Orders and two Houses,—that is, in fact, must be carried by a nearly unanimous Church. As the Church is not unanimous, or anything like it, the effect of this proviso will be that nothing can be carried except by menace or revolution, and that the majority will constantly be subject to the veto of a minority, the votes of 99 laymen, for example, being cancelled by the votes of 51. Men who speak English will never bear that position long, more especially when they have a final remedy in their own hands. The Committee, we dare say, were afraid of the numerical predominance of the Calvinistic party, a predominance which may be increased by the new distribution of patronage ; but they should have relied upon the House of Bishops, and not upon an arrangement certain to appear unjust, and always provocative of intense bitter- ness. Suppose both Orders grant votes to female communi- cants by heavy majorities, but majorities just short of two- thirds, do the Committee think the House will sit down content under the veto of the beaten fraction I There will be an instant agitation for a revision of the Constitution, to Which both Houses will have to submit under penalty of a secession,—a fatal example, sure to be followed whenever party spirit rises high. The first necessity for a Constitution of this kind is that it should work smoothly until it has been solidified by time, and this can only be secured by allow- ing the majority that power which Englishmen by habit and tradition are accustomed to consider just. The Bishops must rely upon themselves, and not sacrifice the whole popularity of the system from a feeble dread of having to face a majority of their flocks.