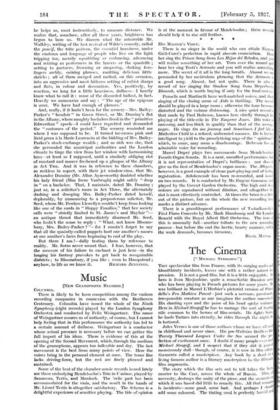 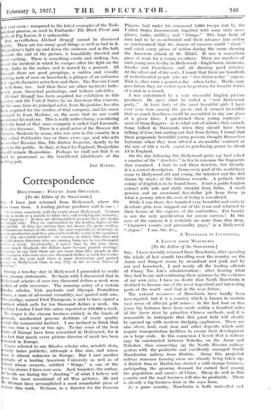 ["MICHAEL STrlocoFF."] Tins spectacular film from France, with its surging molis bloodthirsty incidents, leaves one with a rather mixed i! pression. It is not a good film, but it is a little enjoyable. ■-• hero is Ivan Mosjoukine, quite a remarkable Russian who has been playing in French pictures for some years. n. was brilliant in Marcel L'Herbier's pictorial version of Pir.- dello's Feu Mathieu Pascal—just such a nervous, passion.:!,, Irresponsible creature as one imagines the author C011ek11,:. His slanting eyes and the poise of his head spoke yawl,- Here in Michael Strogoff he has to manage the sort of tenr[.- role common to the heroes of film-serials. Ile fights bow. he hurls Tartars into eternity, he rides through the night.

Jules Vernes is one of those authors whom we have all

in childhood and never since. His pre-Wellsian thrillers ti Twenty Thousand Leagues Under the- Sea seemed the K. faction of excitement once. I doubt if many people ever Michael Strogoff, and I suspect . that if they did it p1oe,1 monstrously dull—though, of course, it 15 now in film advci- tisements called a masterpiece. Any book by a dead or a living famous author is a literary masterpiece to the illiteraU

The story which the film sets out to tell takes the 11M4 courier to the Czar, across the whole of Russia. .This, necessity, destroys the unity of the piece, and the scenario on which it was based did little to remedy this. - All that remoilo is incidents—some good, some bad; And perhaps I 40'11! add some. cloned. _.The tinting.. used 15 perfectly horrid anu

ot very even : compared to the latest examplesof the Tech- colour process, as used in Fairbanks' The Black Pirate and arts of Fig Leaves, it is unbearable. .

But, nevertheless, Michael Strogoff cannot be dismissed ildttiv. There are too many good things as well as bad in it. fosjoukine's fight up and down the staircase and in the hall, wards the end of the picture, is beautifully directed and cat exciting. There is something exotic and striking, too, boat the incident in which he escapes after the fight on the (Try, hides in the rushes, and is nursed by a peasant. All !trough there arc good groupings, a sudden and visually xeiting rush of men on horseback, a glimpse of an unknown at superb character actor here and there. The Russian Court well done, too. And then there are other incidents ludie- )usly poor, theatrical posturings, and tedious sub-titles. Michael Strogoff has been acquired for .exhibition in this auntry and the United States by an American film concern. t the same time its principal actor, Ivan Mosjoukine, has also veil acquired for the studios of that company, and his name hanged to Ivan. Moskine„ on the score that no one could inmounce his real one. This is really rather funny, considering hat the head of that same company is called Carl Laemmk. tis also tiresome. There is a great actor of the Moscow Art heatre, Moskwin by name, who was seen in this country in a he called Polikushka two or three years ago, and who acts

a another Russian film, The, Station Inspector, shortly to be von to the public. So that, at least for England, Mosjoukine honk! remain Mosjoukine. Perhaps we shall not find it so tal to pronounce as the bewildered inhabitants of the tiling-pot.