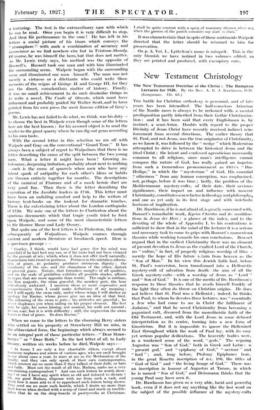 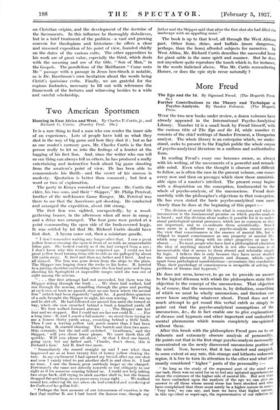 The New Testament .Doctrine of the Christ : The Bampton Lectures for 1926. By the Rev. A. E. J. II:Matson. D.D. (Longmans. 12s. 6d.) THE battle for Christian orthodoxy is perennial, and of late years has been intensified. The half-conscious Arianism of the Nordic races is always to be reckoned With, a mental predisposition partly inherited from their Gothic. Christianiza- tion; and it has been said that every Englishman is, Ity instinct, a semi-Arian. - Doubts with regard to the proper Divinity of Jesus Christ have recently received indirect rein- forcement from several directions. The earlier theory that St. Paul, and not Jesus, was the true originator of Christianity, as we know it, was followed by time" wedge " which Modernism attempted to drive in between the historical Jesus and the ideal Christ ; the latent and confessed agnosticism necessarily common to all religions, since man's intelligence cannot compass the nature of God, has really gained an impetus from such a tremendous pronouncement as Otto's " Das Heilige," in which the " mysterium " of God, His essential 1! otherness" from any human conception, was emphasized, not, perhaps, before it was time ; lastly, the problem of the Mediterranean mystery-cults, of their date, their saviour- significance, their impact on and influence with nascent Christianity, constitutes a new factor in theology and philosophy, and one as yet only in its first stage and with indefinite horizons of implication.

. Dr. Rawlinson, if he is not afraid of, is greathy concerned with, Bousset's remarkable work, Kyrios Christos and its modifica- tions in Jesus der Herr; a glance at the index, and to the devoting of the whole of Appendix I. to his contentions is sufficient to show that in the mind of the lecturer it is a serious and necessary task to come to grips with Bousset's momentous theories while working towards his own conclusions. I3otisset argued that in the earliest Christianity there was no element Of present devotion to Jesus as the exalted Lord of the Church, • no " coitus," in fact, of properly religious worship of Him

merely the hope of His future Itturn from heaven as the "Son of Man." In his view this Jewish faith had, before St. Paul's conversion, been transformed into a Hellenistic mystery-cult of salvation from death—the aim of all the Greek mystery-cults—with a worship of Jesus as " Lord '' and "Son of God." 'It is one of the merits of Dr. Rs wlinson's response to these theories that he avails himself frankly of the light they often do throw on Christian origins. Ile does not believe that St. Paul was a Helknist ; indeed, he thinks that Paul, to whom he devotes three lectures, was " essentially a Jew who had come to see in Christ the fulfilment of Judaism," and that he saved Christianity front becoming .a paganized cult, divorced from the monotheistic faith of the Old Testament, and, with the Lord Jesus in sonic debased interpretation as its centre, turning into a new form of Gnosticism. But it is impossible to ignore the Hellenized East throughout which the work of Paul lay, with its easy yet serious popular deifications. The heavenly bodies were, in a weakened sense of the word, "gods." The reigning Augustus was ".Son of God," both in Greek and Latin ; "present god," and' "epiphany of God," " saviour " and " lord " ; and, long before, Ptolemy Epiphanes bore, in the great Rosetta inscription of B.C. 106, the titles of "God of God" and "the living Image of God." There was an inscription in honour of Augustus at Tarsus, in which he is named "Son of God," and Deissmann thinks that the young Paul may have seen it.

- Dr. Rawlinson has given us a very able, lucid and powerful book, even if it does not say .anything .like thp last word On the subject of the possible influence of the mystery-cults

on. Christian origins, and the development of the doctrine of the Sacraments. In this influence he thoroughly disbelieves, but in a brief treatment of the problem—a vast and growing concern for theologians and historians—he offers a clear and reasoned exposition of his point of view, founded chiefly on the dates of the various cults. The other appendices to his work are of great value, especially the third, which deals with the meaning and use of the title, " Son of Man," in the Gospels. The parallelism of the Matthaean "Come unto

" passage with a passage in Jesus ben-Sira.ch is notable, as is Dr. Rawlinson's own hesitation about the words being Christ's ipsissinia verba. Finally, we are grateful for the copious footnotes, necessary to fill out with references the framework of the lectures and witnessing besides to a wide and careful scholarship.