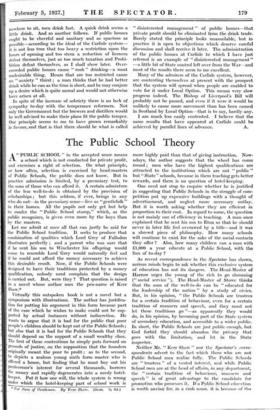 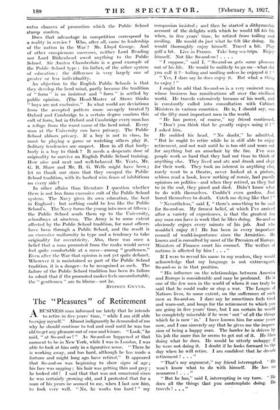 A" PUBLIC SCHOOL" in the accepted sense means a school which is not conducted for private profit, and exercises a right of selection. On what principle, or how often, selection is exercised by head-masters of Public Schools, the public does not know. But in practice admission is limited, by a pecuniary test, to the sons of those who can afford it. A certain admixture of the less well-to-do is obtained by the provision of scholarships ; but this seldom, if ever, brings in any who do not—in the pecuniary sense—live as " gentlefolk " in their homes. All the pupils not only get but help to confer the "Public School stamp," Which, as the public recognizes, is given even more by the boys than by the masters.

Let me admit at once all that Can justly be said for the Public School tradition. It seeks to produce that combination of qualities which Lord Grey of Fallodon illustrates perfectly ; and a parent who was sure that if he sent his son to Winchester his offspring would come to resemble Lord 'Grey would naturally feel sad if he could not afford the money necessary to achieve this desirable result. Now, if the Public Schools were designed to have their traditions protected by a money qualification, nobody need complain that the design is carried out. But, were they ? That question is raised in a novel whose author uses the pen-name of Kerr Shaw.* Virtually this outspoken book is not a novel but a symposium with illustrations. The author has justifica- tion for putting his argument in this form because part of the case Which he wishes to make could not be sup- ported by actual instances without indiscretion. He wants to argue that it is bad for the public that poor People's children should be kept out of the Public Schools; but also that it is bad for the Public Schools that they Should depend on 'the -support of a small wealthy class. The first of these contentions he simply puts forward on grounds of justice; on the supposition that the founders originally meant the poor to profit ; as to• the second, he depicts a zealous young sixth form. master who is offered a house, but finding that he must buy out his Predecessor's interest for several 'thousands, borrows the money and rapidly degeherates into a needy hotel- keeper. Put it ho* one will; the whole system is wrong Under which the hotel-keeping • part of school work is * For Sons of Gentlemen. By Kerr Shaw. (Den-t. 7s 6c1.) more highly paid than that of giving instruction. Now- adays, the author suggests that the wheel has come round ; men who have the highest qualifications are attracted to the institutions which are not " public " but "State" schools, because in them teaching gets better rewards, and there is no question of hotel-keeping.

One need not stop to enquire whether he is justified in suggesting that Public Schools in the struggle of com- petition put up expensive buildings with a thought of advertisement, and neglect more necessary outlay. But it is worth asking whether they are efficient in proportion to their cost. In regard to some, the question is not mainly one of efficiency in teaching. A man once explained that he sent his son to Eton so that he should never in later life feel overawed by a title—and it was a shrewd piece of philosophy. How many schools will continue to exist. for the sake of the social contacts they offer ? Also, how many children can a man with £1,000 a year educate at a Public School, with the fees of to-day ?

As recent correspondence in the Spectator has shown, serious minds begin to ask whether this exclusive system of education has not its dangers. The Head-Master of Harrow urges the young of the rich to go slumming (" social service "). The Head-Master of Stowe thinks that the sons of the well-to-do can be "educated for the leadership of the nation" by a study of civics. But, in his opinion, "the Public Schools are trustees for a certain tradition of behaviour, even for a certain tradition of manners and speech, and they must not let these traditions go "—as apparently they would do, in his opinion, by becoming part of the State system Of secondary education, and accessible to a wider public. In short, the Public Schools are just public enough, but God forbid they should abandon. the privacy that goes with the limitation, and let in the State inspector.

Neither Mr.." Kerr Shaw" nor the Spectator's , corre- spondents advert to the fact which ,those who are not Public- School men realize fully. The Public Schools are " trustees " of a vested interest, and while Public School men are at the head of affairs, in, any department, the ,"certain tradition of behaviour,. manners and speech" is of great advantage to the candidate for promotion who possesses-. it , If a Public School education is worth paying for in a Cash Sense it is because of tha extra chances of promotion which the Public School stamp confers.

Does that advantage in competition, correspond to a reality in service ? Who, after all, came to leadership of the nation in the War ? Mr. Lloyd George. And of other ,conspicuous successes, neither Lord Reading nor Lord Birkenhead owed anything to the Public. School. Sir Austen Chamberlain is a good example of the Public School type ; his father, of the other system of education : the difference is very largely one of greater or less individuality. - .

An objection to the English Public Schools is that they. develop the herd •mind, partly because the tradition of " form " is so insistent and " form " is settled by public opinion. (The Head-Master of Stowe thinks "boys are not exclusive." In what world are deviations front the accepted pattern more savagely treated ?) Oxford and Cambridge to a certain degree confirm this cult of form, but in Oxford and Cambridge every man has a refuge from the worst cause of the herd mind.. Every man at the University can have privacy. The Public School abhors privacy. If a boy is not in class, he must be playing a game or watching others play it. Solitary tendencies are suspect. How in all that hurly- burly is a boy to think ? It needs a desperate dose of originality to survive an English Public School training. How nice and neat and well-behaved Mr. Yeats, Mr. G. B. Shaw and Mr. H. G. Wells might have been.; let. us thank our stars that they escaped the Public School tradition, with its barbed wire fence of inhibitions on every side !

In other affairs than literature I question whether there is not loss from excessive cult of the Public School system. The Navy gives its own education, the best in England : but nothing could be less like the Public School's. The Navy turns the young into men at fifteen ; the Public. School sends them up to the University, schoolboys at nineteen. The Army is to some extent affected by the Public .School tradition, for most officers have been through a Public School, and the result is an excessive uniformity in type and a tendency to take originality for eccentricity. Also, there was once a belief that a man promoted from the ranks would never feel quite comfortable at a mess—among "gentlemen." Even after the War that opinion is not yet quite defunct. Wherever it is maintained as part of the Public School tradition, it is a danger—to be recognized as such. The failure of the Public School tradition has been its failure to admit that if the promoted ranker feels uncomfortable, the " gentlemen " arc to blame—not he.