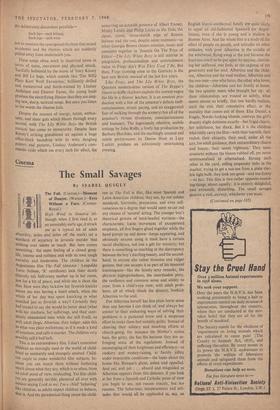 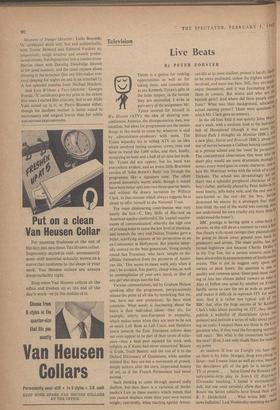 a a High Wind in Jamaica (al- o _ though when I first read it, at - t:°o an unsuitably early age, it struck me as a typical bit of adult absurdity, miles and miles off the mark) set a standard of accuracy in juvenile murder that nothing ever seems to touch. But here comes something : the same feeling of a closed gang- life, intense and ruthless and with its own tough morality and 'tenderness. The children in the Argentinian film The Fall (director : Leopoldo Torre Nillson, 'X' certificate) lock their dumb (literally so), half-crazy mother up in her room, Just for a bit of peace, and while she is there she dies. How were they to know her feverish knocks meant she was having a heart attack, when the Whole of her day was spent knocking in what sounded just as feverish a way? Certainly they had tended to say she would be better dead (what with her madness, her sufferings, and their com- pletely abandoned state while she still lived), so with adult illogic Albertina, their lodger, adds this to What was plain misfortune, as if it made a kind of intention, and calls it murder. The children very sensibly call it bad luck.

This is an extraordinary film. I don't remember children so movingly used or the world of child- hood so intimately and strangely entered. Child- ren ought to make wonderful film subjects, be- cause you can watch them without bothering much about what they say, which is so often, from an adult point of view, misleading. Yet film child- ren are generally terrible, plastered all over with notices saying Look at me, I'm a child! 'behaving' like children, as adults expect children to behave, that is. And the paradoxical thing about the child- ren in The Fall is that, like most Spanish and Latin-American children, they are, by our solider standards, histrionic, precocious, and even self- conscious to a degree that would seem to cut out any chance of 'natural' acting. The younger boy's theatrical gesture of hard-headed wariness—the characteristic Latin movement of exasperated emphasis, all five fingers glued together while the hand pumps up and down—keeps appearing, and obviously anyone using it must have a certain racial ebullience, not just a gift for mimicry; but there is something so touching in the discrepancy between the boy's startling beauty, and the second- hand, in anyone else rather tiresome and vulgar gesture, that one accepts it as part of his innocent knowingness—like the faintly sexy remarks, the physical highspiritedness, the unorthodox piety, the resilience and common sense and ability to cope, from a child's-eye view, with adult prob- lems; all of which shock the dreamy, bookish Albertina to the soul.

For Albertina herself has less plain horse sense than any heroine I can think of, and always her answer to their endearing ways of solving their problems is a puckered brow and a desperate effort to make them feel suitably guilty. Instead of cheering their solitary and touching efforts at church-going, for instance (in Mother's stolen hats, the girls), she has fits because they are in- fringing some of the regulations. Instead of encouraging all their brightness and efficiency—at cookery and money-raising, at family jollity under impossible conditions—she lopes about the house like Banquo's ghost, ashen and appalled. And yet, and yet . . . absurd and misguided as Albertina appears from this distance, if you look at her from a Spanish and Catholic point of view you begin to see, not reason exactly, but her reasons. The behaviour, temperaments and atti- tudes that would all be applauded in, say, an English liberal-intellectual family are quite likely to appal an old-fashioned Spaniard (or Argen- tinian), even if she is young and a student in Buenos Aires. And the whole film is a study of the effect of people on people, and attitudes on other attitudes, with poor Albertina in the middle of the whirlwind, flying away at the end because she fears too much to be put upon by anyone, cherish- ing her selfhood, one feels, at the expense of her generosity and her soul. Albertina and the child- ren, Albertina and the mad mother, Albertina and the two men—one who hates, the other who loves, the children—Albertina and her family at home. the two spinster aunts who brought her up: all these relationships are treated so subtly, what seems almost so briefly, that one hardly realises, until the end, their cumulative effect, or the morality that comes out of them. Elsa Daniel, a fragile, Nordic-looking blonde, conveys the girl's dreamy slight dottiness exactly—her frigid charm, her selfishness, her shock. But it is the children who really carry the film—with their warmth, their racket, their ubiquity, their need, under all the airs, for adult guidance, their extraordinary charm and beauty, their secret 'rightness.' They seem creatures without the bloom rubbed off, yet never sentimentalised or etherealised. Hosing each other in the yard, selling suspender belts in the market, trying to get a sun-tan from a plain elec- tric light bulb, they look too good—and too funny —to last. This film is two rather opposite-sound- ing things, about equally : it is entirely delightful, and extremely disturbing. The small savages deserve a visit, anyway, whichever you want.

Moment of Danger (director : Laslo Benedek; 'A' certificate) starts well, fast and authentically, with Trevor Howard and Edmund Purdom as, respectively, tough amateur and smooth profes- sional crooks, but degenerates into a routine trans- Iberian chase with Dorothy Dandridge thrown in for good measure, and the usual coyness about sleeping in the armchair (has any film-maker ever tried sleeping for nights on end in an armchair?). A few splendid minutes from Michael Hordern.

And Eyes Without a Face (director : Georges Franju; 'X' certificate) gets my prize as the sickest film since I started film criticism. Sad to see Alida Valli mixed up in it; or Pierre Brasseur either, though his deadpan manner is better suited to necromancy and surgical horror than her subtle and nervous expressiveness.