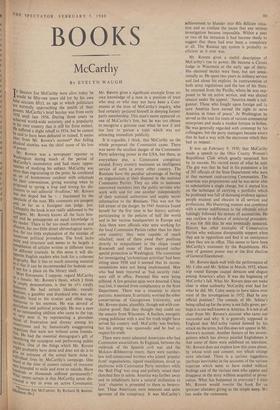 BY EVELYN WA UGH IF Senator Joe McCarthy were alive today he would be fifty-one years old (or by his own false account fifty), an age at which politicians are normally approaching the zenith of their Powers. McCarthy's brief heyday was from early 1950 until late 1954. During those years he achieved world-wide notoriety and a popularity in his own country that is still far from extinct. He suffered a slight rebuff in 1954, but he cannot be said to have been defeated or ruined. It seems clear from Mr. Rovere's account* that failing Physical stamina was the chief cause of his loss of Power.

Rovere was a newspaper reporter in Washington during much of the period of McCarthy's ascendancy and had many oppor- tunities of studying his subject. McCarthy was more than ingratiating to the press; he combined an air of bonhomous candour with solicitude for their convenience, giving warning when he 13r0Posed to spring a trap and timing his dis- closures to suit editorial 'deadlines.' Mr. Rovere was not duped but he v, s fascinated by the spectacle of the man. His comments are pungent and, as far as a foreigner can judge, just. Unhappily the book is not really addressed to the foreigner. Mr. Rovere knows all the facts him- 8.e.lf and he presupposes an equal knowledge in his reader. There is far too much comment and far too little direct chronological narra- "ve, far too little explanation of the niceties of American political procedure. The book lacks unity and structure and seems to be largely a cc°nMilation of articles written at different times 'Or different journals. In this sense it will dis- abPPoint English readers who look for a coherent • IngraPhy. But it has so much amusing material !,11 it that it can be recommended for bedside use, u. not for a place on the library shelf. a Most Europeans, I suppose, regard McCarthy hea fanatic. Mr. Rovere's thesis, which think e ant1311/ demonstrates, is that he v.v.,-s totally asincere. He had certain likeable, rascally clistialitiest a gambler and drunkard who was un- shakably loyal to his cronies and often mag- nanimous to his enemies. He was devoid of Patriotism and political principle. He was a man Of no outstanding abilities who came to the top, 01, very near it, by representing a prevalent tri con°d of frustration and dismay among his stinntrYmen and by fantastically exaggerating ti sPicions that were not without some founda- z ifingHyehad the essential demagogue's gift of a the scapegoat and performing public r,ifice. One of the things which Mr. Rovere gnt profitably have done and does not do is to i„. an estimate of the actual harm done to "uividual lives by McCarthy's campaign. One men heard at the time of careers ruined, of innocent hounded to exile and even to suicide. Have hundreds or thousands suffered permanently? cwohvat seems certain is that McCarthy never dis- ,___red a spy or even an active Communist.

04uNATORs. ) 18 JOE MCCARTHY. By Richard H. RoVere. en, Mr. Rovere gives a significant example from nis own knowledge of a man in a position of trust who may or who may not have been a Com- munist at the time of McCarthy's inquiry, who had certainly perjured himself in denying former party membership. This man's name appeared on one of McCarthy's lists, but he was too obtuse to recognise a genuine case when he saw it and too lazy to pursue a topic which was not attracting immediate publicity.

It is arguable, I think, that McCarthy on the whole prospered the Communist cause. There was never the smallest danger of the Communist Party achieving power in the USA, but there, as everywhere else, a Communist conspiracy existed. Every country maintains an intelligence service of sorts in every other country. The Russians have the peculiar advantage of having an organisation at their disposal in the national Communist Parties. They are able to insinuate unavowed members into the public services who work with and for one another independently of their national authorities and supply secret information to the Russians. This was not the full extent of the danger. In 1945 America found herself for the first time in her history actively participating in the policies of half the world and in her various headquarters in Europe and Asia there were officials who were working for the local Communist Parties rather than for their own country; they were capable of much mischief; most of them owed their positions directly to sympathisers in the clique round Roosevelt and some of them enjoyed rather special protection in Washington. The committee for investigating 'tin American activities' had been sitting since 1938 and it seemed that its recom- mendations were not being implemented. Men who had been reported as 'bad security risks' were still in office. Personal files were being pilfered. A few genuine spies were detected. China was lost, it seemed from complacency in the State Department. There was a situation to alarm patriotic Americans. It certainly worried the sober conservatives of Georgetown University, and Mr. Rovere states, plausibly, though not with con- clusive proof, that they thought they could use the senator from Wisconsin. A fearless, energetic young politician with a zeal for truth might have served his country well. McCarthy was fearless, but his energy was spasmodic and he had no respect for truth.

There were many educated Americans who had Communist associations. In England, between the outbreak of the Spanish civil war and the Molotov-Ribbentrop treaty, there were number- less well-intentioned boobies who joined 'popular front' organisations, signed manifestoes, stood on platforms with Communist Party members while the 'Red Flag' was sung and politely raised their clenched fists in salute. America was farther away and its inhabitants have a natural inclination to 'join' vhatever is presented to them as benevo- lent. these Americans were innocent and quite ignorant of the conspiracy. It was McCarthy's achievement to blunder into this delicate situa- tion and so confuse the issues that any serious investigation became impossible. Within a year or two of his intrusion it had become shady to suggest that there had ever been a conspiracy at all. The Russian spy system is probably as efficient as it ever was.

Mr. Rovere gives a useful description of McCarthy's rise to power. He became a Circuit Judge in Wisconsin at the early age of thirty. His electoral tactics were base, but not sensa- tionally so. He spent two years in military service and lied about his exploits. In contravention of both army regulations and the law of his State, he returned from the Pacific, where he was sup- posed to be on active service, and was elected senator under the appeal : 'America needs a tail- gunner. Those who fought upon foreign soil to save America have earned the right to serve America in times of peace.' At Washington he served as the tout for touts of various commercial enterprises and made a modest fortune in bribes. He was generally regarded with contempt by his colleagues, but the party managers became aware that he had a way with the electorate which they had to respect.

It was on February 9, 1950, that McCarthy made a speech to the Ohio County Women's Republican Club which greatly surprised him by its success. No record exists of what he said. The gist was that he had in his possession a list of 205 officials of the State Department who were at that moment card-carrying Communists. The assertion was preposterous and he was never able to substantiate a single charge, but it started him on the technique of carrying a portfolio which he professed was full of damning evidence against people eminent and obscure in all services and professions. His blustering manner was combined with a serene indifference to the rebuttals which haltingly followed his stream of accusations. He was reckless in defiance of senatorial procedure. It was for this that he was eventually censured. History has other examples of Conservative Parties who welcome disreputable support when they are in opposition and find it an annoyance when they are in office. This seems to have been McCarthy's treatment by the Republicans. His time of greatest power was at the first election of General Eisenhower.

Mr. Rovere deals well with the performance of Mr. Cohn and Mr. Schine in March, 1953, whose trip round Europe caused derision and disgust among America's allies. It was the beginning of McCarthy's fall. What Mr. Rovere does not make clear is what authority McCarthy ever had for what he did. Mr. Cohn seems to have taken over most of the investigation in 1952. Had he any official position? The comedy of Mr. Schine's being called up for the army is not fully given; per- haps it is too well known in America. It is not at all clear from Mr. Rovere's account who came out successful and why. It is generally supposed in England that McCarthy ruined himself by his attack on the army, but this does not appear in Mr. Rovere's account. Another feature of the investi- gations which has always puzzled Englishmen is that some of them were exhibited on television. Mr. Rovere does not explain how this came about, by whose wish and consent, nor which sittings were televised. There is a curious raggedness (perhaps inevitable) in the accounts of the various inquiries which seem to have ended without findings and of the various men 'who appear and disappear, in the story without acquittal or prose- cution. What has happened to everyone? I wish Mr. Rovere would rewrite the book for us ignorant islanders giving us the simple story. We 'can make the comments.