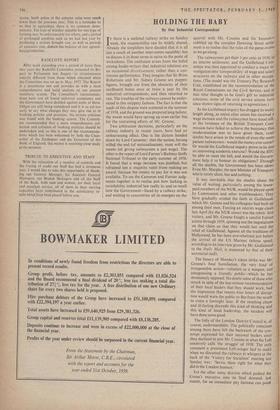 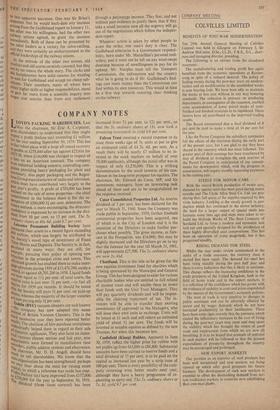 By Our Industrial Correspondent

IF there is a national railway strike on Sunday week, the responsibility can be widely shared. Already the simplifiers have decided that it is all just a result of another inter-union squabble; but to discuss it in these terms is naive to the point of wickedness. The confusion arises from the belief among leader-writers that industrial relations are an occasional divertissement, rather than a con- tinuous performance. They imagine that Sir Brian Robertson and Mr. Sidney Greene are puppet- figures, brought out from the obscurity of their cardboard boxes once or twice a year by the industrial correspondents, and then returned to rest. The troubles of the railways cannot be under- stood in this snippety fashion. The fact is that the seeds of this dispute were scattered in the summer of 1958, and the ground was prepared long before; the weeds would have sprung up even earlier but for the restraining efforts of Mr. Greene.

Two arbitration decisions, particularly on the railway industry in recent years, have had an embarrassing effect. One is the dictum handed down by Lord Cameron : that the nation, having willed the end (of nationalisation), must will the means (of giving railwaymen a just wage). The other is the report of Lord Forster's Railway Staffs ' National Tribunal in the early summer of 1958. It found that a wage increase was justified, but refrained (on a majority vote) from making an award, because the money to pay for it was not available. To see the Cameron and Forster judg- ments together is to realise just how lacking in inviolability industrial law really is; and to recall how the Government—faced by a railway strike, and wishing to concentrate all its energies on the quarrel with Mr. Cousins and his busmen— cobbled up the complex Downing Street settle- ment is to realise that the rules of the game evolve as we go along.

The railwaymen got their 3 per cent. in 1958, as an interim settlement; and the Guillebaud Cony mittee was then appointed to conduct a major in- vestigation into 'comparability' of wage and salary structures on the railways and in other occupa- tions. (The model was the Treasury Pay Research Unit, established on the recommendation of the Royal Commission on the Civil Service, and at that time thought to be God's gift to industrial relations; some of the civil service unions have since shown signs of returning to agnosticism.) As the Guillebaud inquiry has dragged its weary length along, as union after union has received a wage increase and the railwaymen have stood still, as the revenues of the British Transport Com- mission have failed to achieve the buoyancy that modernisation was to have given them, cruel doubts have arisen in the minds of even the more patient railwaymen : would the money ever come? Or would the Guillebaud inquiry prove to be just an interesting academic exercise? Would the BTC be able to meet the bill, and would the Govern- ment help it to honour its obligations? Through all the doubts, the Government has been silent. Even Mr. Marples, the new Minister of Transport, who is rarely silent, has said nothing.

It was inevitable that the doubts about the value of waiting, particularly among the lower- paid members of the NUR, would be played upon by Communists and other troublemakers. They have gradually eroded the faith in Guillebaud, which Mr. Greene and his colleagues had built uP among their men. Forcing an interim wage claim last April (by the NUR alone) was the rebels' first victory, and Mr. Greene fought a careful Fabian action through 1959, spinning out the negotiations on that claim so that they would last until the relief of Guillebaud. Against all the traditions of Hollywood, he has been overwhelmed just before the arrival of the US Marines (whose speed. according to an interview given by Mr. Guillebaud to the Daily Mail, is measured by that of their secretarial staff).

The lunacy of Monday's token strike was Mr. Greene's final humiliation, the very kind of irresponsible action—valueless as a weapon, and antagonising a friendly public—which he has strenuously opposed. No doubt some of those who struck in spite of the last-minute recommendation of their local leaders that they should work, had the impression that twenty-four hours of disrup- tion would warn the public to flee from the wrath to come a fortnight later. If the resulting chaos and ill-feeling discredit this kind of thinking and this kind of local leadership, the incident will have done some good.

The folly of the London District Council is, of course, understandable. The politically conscious

among them have felt the backwash of the con- tempt expressed for their national leaders since they declined to join M r. Cousins in what the Left emotively calls 'the struggle' of 1958. The only comment a prominent Left-winger had to make when we discussed the railways in whispers at the back of the 'Victory for Socialism' meeting last Sunday was : 'Serves them right for what they did to the London busmen.'

Yet the other noisy districts which pushed the Union's executive into its final demand, last month, for an immediate pay increase can point

to two apparent successes. One was Sir Brian's statement that he would back-date any increase arising from the Guillebaud report to January 11; the other was his willingness, had the other two railway unions agreed, to grant the increase immediately. Both of these can be presented by the rebel leaders as a victory for sabre-rattling, and they were certainly an embarrassment to the official leaderships of the railway unions. In the attitude of the other two unions, old rivalries and old scores certainly counted, but they are by no means the whole story. The clerks and the footplatemen have solid reasons for wanting

to wait for Guillebaud and accept no cheap sub- stitutes. Their members, many of whom have either to higher skills or higher responsibilities, stand gain far more from a scientific inquiry into wages and salaries than from any settlement through a percentage increase. They fear, and not without past evidence to justify them, that if they take a small increase now all the urgency will go out of the negotiations which follow the indepen- dent report.

Whatever action is taken by other people to avert the strike, one man's duty is clear. The Guillebaud enterprise is a Government responsi- bility, born under Mr. Macmillan's personal mid- wifery, and it must not be left on any wind-swept doorstep because of unwillingness to pay for its upkeep. Mr. Marples must tell the Transport Commission, the railwaymen and the country what he is going to do if Mr. Guillebaud's find- ings cost more money than the Commission can find within its own resources. This would at least be a first step towards restoring clear thinking on the railways.