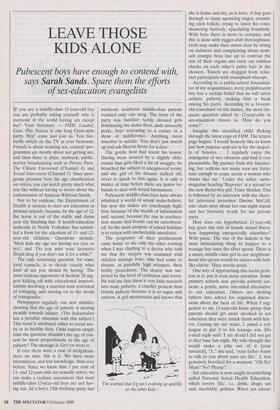 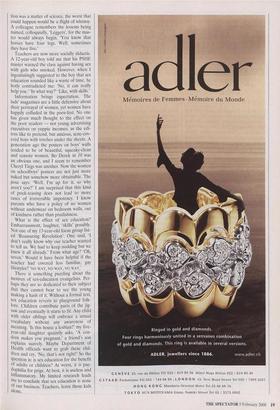 Pubescent boys have enough to contend with,

says Sarah Sands. Spare them the efforts of sex-education evangelists•

IF you are a middle-class 13-year-old boy you are probably asking yourself: why is everyone in the world having sex except me? Your literature — FHM, Loaded, Gear, Play Station is one long Oasis-style party. Hey! come and join us. You hur- riedly switch on the TV in your bedroom. Friends is about wanting sex, comedy pro- grammes are mostly about not getting sex, and then there is plain, midweek, public- service broadcasting such as Private Parts: The Clitoris Uncovered (Channel 4) and Sexual Intercourse (Channel 5). Since peer- group pressure bust the age classification on videos, you can watch pretty much what you like without having to worry about the endorsement of Andreas Whittam Smith.

Not to be outdone, the Department of Health is anxious to start sex education in primary schools, because, by the age of 12, the horse is out of the stable and damn near the finishing line. A health-education authority in North Yorkshire has submit- ted a form for the attention of 11- and 12- year-old children. Questions include: `Most kids my age are having sex (yes or no)', and 'Do you miss your favourite illegal drug if you don't use it for a while?'

The only remaining question, for some local councils, is to decide exactly what kind of sex you should be having. The more zealous opponents of Section 28 sug- gest kicking off with educational improvi- sations involving a married man convicted of cottaging, and moving on to the needs of transgender.

Newspapers regularly run new statistics showing that the age of puberty is moving steadily towards infancy. (The Independent has a peculiar obsession with this subject.) This trend is attributed either to social acu- ity or to healthy diets. Child experts simply raise the question: shouldn't the age of con- sent be more proportionate to the age of puberty? The message is: GET ON WITH rr.

If ever there were a case of sledgeham- mers on nuts, this is it. We have more information, and less knowledge, than ever before. Since we know that 1 per cent of 11- and 12-year-olds are sexually active, we can make a realistic assessment that most middle-class 13-year-old boys are not hav- ing sex. At a boy's 13th birthday party last weekend, assiduous middle-class parents counted only one snog. The form of the party was familiar: tartily dressed girls dominating the dance floor, dads unusually perky, boys retreating to a corner in a show of indifference. Anything more assertive is suicide. You don't just march up and ask Sharon Stone for a date.

The gentle host had learnt his lesson. Having been assured by a slightly older cousin that girls liked a bit of swagger, he broached the subject in unequivocal terms; and the girl of his dreams stalked off, never to speak to him again. It is only a matter of time before there are junior tri- bunals to deal with sexual harassment.

Pubescent middle-class boys have always inhabited a world of sexual make-believe, but now the stakes are crucifyingly high; first, because of the wealth of information and, second, because the rise in coeduca- tion means that boasts can be corroborat- ed. So the main purpose of school holidays is to return with uncheckable anecdotes.

The poignancy of their predicament came home to me only the other evening when I was chatting to a doctor who told me that his surgery was crammed with stricken teenage boys, who had come to discuss, in painfully high whispers, their bodily procedures. The doctor was sur- prised by the level of confusion and terror. He told me that there is very little research into male puberty, a crueller process than female puberty because it is so vague and uneven. A girl menstruates and knows that 'I'm worried that Ug isn't evolving as quickly as the other kids.' she is home and dry, as it were. A boy goes through so many agonising stages, examin- ing each follicle, trying to lower his voice, showering furtively, ejaculating boastfully. With boys there is more to compare and this is done with rugger-club thoroughness. Girls may make their status clear by sitting on radiators and complaining about stom- ach cramps; boys line up to contrast the size of their organs and carry out ruthless checks on each other's pubic hair in the showers. Towels are dragged from reluc- tant participants with triumphant whoops.

According to a public-school housemas- ter of my acquaintance, every prepubescent boy has a certain belief that he will never achieve puberty, making him a freak among his peers. According to a 14-year- old consultant on the matter, the most elo- quent question asked by 12-year-olds in sex-education classes is, `How do you come?'

Imagine this mortified child flicking through the latest copy of FHM. The letters page begins: `I would honestly like to know just how popular anal sex is for the majori- ty of females . . . I regularly enjoy the indulgence of two vibrators and find it very pleasurable. My partner finds this fascinat- ing, but reckons not many men are fortu- nate enough to come across a woman who thinks, like me.' Under the sober, news- magazine heading 'Reporter' is a spread on the new Bend-bra girl, Tracy Heiden. This is followed by an interview with the cheer- ful television presenter Davina McCall, who chats away about her one-night stands and her favourite words for her private parts.

How does our hypothetical 13-year-old boy greet this tide of female sexual libera- tion happening energetically elsewhere? With panic. The rise of the ladette is the • most intimidating thing to happen to a teenage boy since the silver spoon. There is a smart, middle-class girl in our neighbour- hood who greets would-be suitors with bell- like clarity: `Hiya, needle-prick.'

One way of approaching this social prob- lem is to pay it even more attention. Some primary schools now provide puberty ses- sions: a gentle, more one-sided alternative to sex education. Others are inviting fathers into school for organised discus- sions about the facts of life. When I sug- gested to my 13-year-old focus group that parents should get more involved in sex education they were struck dumb with hor- ror. Casting my net wider, I asked a col- league to put it to his teenage son. His e-mail reply said: 'I am afraid I did not get to first base last night. My wife thought she would make a joke out of it [your research]. "J.," she said, "your father wants to talk to you about your sex life." J. was genuinely horrified for a moment. "Oh No! Mum? No? Please!" ' Sex education is now taught in something called Personal Social Health Education, which covers 'life', i.e. drink, drugs, sex and, inevitably, politics. When sex educa- tion was a matter of science, the worst that could happen would be a flight of whimsy. A colleague remembers the lessons being named, colloquially, `Leggers', for the mas- ter would always begin, 'You know that horses have four legs. Well, sometimes they have five.'

Teachers are now more socially didactic. A 12-year-old boy told me that his PSHE master warned the class against having sex with girls who smoked. However, when I ingratiatingly suggested to the boy that sex education sounded like a waste of time, he hotly contradicted me: `No, it can really

help you.' what way?"Like, with skills.'

Information brings expectation. The lads' magazines are a little defensive about their portrayal of women, yet women have happily colluded in the porn-fest. No one has given much thought to the effect on the poor readers — not young advertising executives on yuppie incomes, as the edi- tors like to pretend, but anxious, acne-cov- ered boys with torches under the sheets. A generation ago the posters on boys' walls tended to be of beautiful, squeaky-clean and remote women. Bo Derek in /0 was an obvious one, and I seem to remember Cheryl Tiegs was another. Now the women on schoolboys' posters are not just more naked but somehow more obtainable. The pose says: 'Well, I'm up for it, so why aren't you?' I am surprised that this kind of prick-teasing does not lead to more cases of irreversible impotency. I know parents who have a policy of no women Without underwear on bedroom walls, out of kindness rather than prudishness. What is the effect of sex education? Embarrassment, laughter, 'skills' possibly. Not one of my 13-year-old focus group list- ed 'Reassuring Revelation'. One said, '1 don't really know why our teacher wanted to tell us. We had to keep nodding but we knew it all already.' From what age? 'Oh, seven.' Would it have been helpful if the teacher had covered less familiar, gay

There is something puzzling about the motives of sex-education evangelists. Per- haps they are so dedicated to their subject that they cannot bear to see the young making a hash of it. Without a formal text, sex education reverts to playground folk- lore. Children contribute parts of the jig- saw and eventually it starts to fit. Any child with older siblings will embrace a sexual vocabulary without any awareness of meaning. 'Is this house a lesbian?' my five- year-old daughter quaintly asks. 'A con- dom makes you pregnant,' a friend's son explains suavely. Maybe Department of Health officials want to grab these chil- dren and cry, 'No, that's not right!' So the question is: is sex education for the benefit of adults or children? At worst, it is pae- dophilia for prigs. At best, it is useless and inflammatory. My limited research leads me to conclude that sex education is none of our business. Teachers, leave those kids alone.