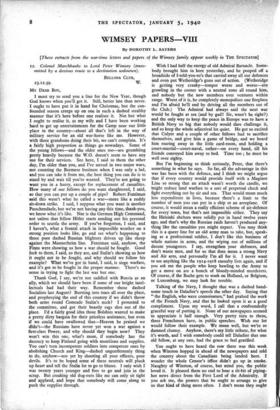 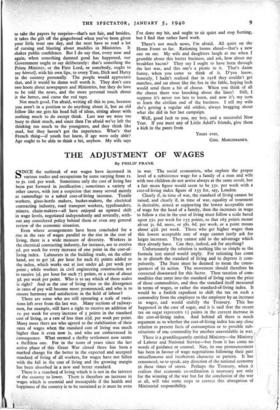 [These extracts from the war-time letters and papers of the Wimsey family appear weekly in THE SPECTATOR] 12. Colonel Marchbanks to Lord Peter Wimsey (trans- mitted by a devious route to a destination unknown).

I must try to send you a line for the New Year, though God knows when you'll get it. Still, better late than never. I ought to have put it in hand for Christmas, but the con- founded season creeps up on one in such a dashed stealthy manner that it's here before one realises it. Not but what I ought to realise it, as my wife and I have been working hard to get up entertainments for the Camp near our little place in the country—about all that's left in the way of military service for an old war-horse like me. However, with three grandsons doing their bit, we can't complain. It's a fairly high proportion as things go nowadays. Some of the young fellows—and the older ones too—are grumbling pretty heavily because the W.O. doesn't seem to have any use for their services. See here, I said to them the other day, I'm older than you, and I've served in two major wars, not counting the Burmese business when I was only a lad, and you can take it from me, the best thing you can do is to stand by and wait till you're wanted. They're not going to want you in a hurry, except for replacement of casualties. How many of our fellows do you want slaughtered, I said, so that you can put up a couple of pips? Robert Fentiman said this wasn't what he called a war—more like a ruddy sit-down strike. I said, I suppose what you want is another Passchendaele, but we're not having any this time, thank-you, we know what it's like. Nor is the German High Command, not unless that fellow Hitler starts sending out his personal order to scuttle the army. If you've forgotten, I said, and I haven't, what a frontal attack in impossible weather on a strong position looks like, go and see what's happening to those poor dashed Russian blighters driven up like sheep against the Mannerheim line. Fentiman said, anyhow, the Finns were showing us how a war should be fought. Good luck to them, I said, so they are, and Stalin's showing us how it ought not to be fought, and why should we follow his example? What we've got in hand, I said, is siege warfare, and it's got to be fought in the proper manner. There's no sense in trying to fight the last war but one.

Thank God, I say, we're not saddled with Russia as an ally, which we should have been if some of our bright intel- lectuals had had their way. Remember • those dashed Socialists last August? Bursting into tears all over the place, and prophesying the end of this country if we didn't throw both arms round Comrade Stalin's neck? I protested to the committee, and got their beastly rags shot out of the place. I'd a fairly good idea those Boishies wanted to make a pretty dirty bargain for their priceless assistance, but even if we could have swallowed that—Heaven be praised we didn't—the Russians have never yet won a war against a first-class Power, and why should they begin now? They won't win this one, what's more, if somebody has the decency to keep Finland going with munitions and supplies. You can't turn incompetent soldiers into competent ones by abolishing Church and King—dashed ungentlemanly thing to do, anyhow—nor yet by shooting all your officers, poor devils. It's to be hoped some of these neutrals will pluck up heart and tell the Stalin lot to go to blazes. I only wish I" was twenty years younger and free to go and join in the scrap. But creaking old dug-outs like me can only sit tight and applaud, and hope that somebody will come along to push the supplies through. Wish I had half the energy of old Admiral Barnacle. Some- body brought him in here yesterday, and he pooped off a broadside of I-told-you-so's that carried away all our defences and even put Wetheridge's guns out of action. (Wetheridge is getting very cranky—temper worse and worse—sits growling in the corner with a neutral zone all round him, and nobody but the new members ever ventures within range. Worst of it is, he completely monopolises one fireplace and I'm afraid he'll end by driving all the members out of the Club.) The Admiral had always said the next war would be fought at sea (and by gad! Sir, wasn't he right?) and the only way to keep the peace in Europe was to have a British Navy so big that nobody would dare challenge it, and so keep the whole adjectival lot quiet. He got so excited that Culyer and a couple of other fellows had to sacrifice themselves, and give him a game of bridge, and we heard him roaring away in the little card-room, and holding a court-martial—court-naval, rather—on every hand, till his friends convoyed him away to bed. Time too ; he must be well over eighty.

But I'm beginning to think seriously, Peter, that there's something in what he says. So far, all the advantage in this war has been with the defence, and I think we might argue that if every country would provide itself with a Maginot Line so strong that an attack wasn't worth the candle, we might reduce land warfare to a sort of perpetual check and fight everything out by air and sea. That would mean much less expenditure in lives, because there's a limit to the number of men you can put in a ship or an aeroplane. Of course, it would mean a really efficient scheme of air-defence for every town, but that's not impossible either. They say the Helsinki shelters were solidly put in hand twelve years ago, and that's why the Russian raids haven't produced any- thing like the casualties you might expect. You may think this is a queer line for an old army man to take, but, speak- ing as a professional soldier, I don't like this business of whole nations in arms, and the wiping out of millions of decent youngsters. I say, strengthen your defences, and don't waste men, and for us that does mean a strong Navy and Air arm, and personally I'm all for it. I never want to see anything like the 1914-1918 casualty lists again, and if you ask me the people who keep bawling to the Army to get a move on are a bunch of bloody-minded murderers. Of course, if the Boche gets to work on Holland, or Belgium, or Luxemburg, we may look for trouble.

Talking of the Navy, I thought that was a dashed hand- some touch in Daladier's speech the other day. Saying that " the English, who were connoisseurs," had praised the work of the French Navy, and that he looked upon it as a good compliment. Upon my word, I call that a confoundedly graceful way of putting it. None of our newspapers seemed to appreciate it half enough. Very pretty turn to them, these Frenchmen have, in public speeches. Wish our lot would follow their example. We mean well, but we're so damned clumsy. Anyhow, there's my little tribute, for what it's worth, and I wish somebody could tell Daladier that one old fellow, at any rate, had the grace to feel gratified.

You ought to have heard the row there was this week when Winston hopped in ahead of the newspapers and told the country about the Canadians being landed here. I wonder the whole Censor's 'Office didn't go up in smoke. Naughty of Winston, of course, but mind you, the public loved it. It pleased them no end to hear a tit-bit of piping- hot news direct from the First Lord of the Admiralty. If you ask me, the powers that be ought to arrange to give us that kind of thing more often. I don't mean they ought to take the papers by surprise—that's not fair, and besides, it takes the gilt off the gingerbread when you've been given your little treat one day, and the next have to read a lot of cursing and blasting about muddles in Ministries. It shakes public confidence. But I do say that, every now and again, when something damned good has happened, our Government ought to say deliberately: that's something the Prime Minister, or the First Lord, or somebody, ought to say himself, with his own lips, to every Tom, Dick and Harry in the country personally. The people would appreciate that, and it would be damn well worth it. They don't care two hoots about newspapers and Ministries, but they do love to be told the news, and the more personal touch about it the better, and curse the red tape.

Not much good, I'm afraid, writing all this to you, because you aren't in a position to do anything about it, but an old fellow like me gets his head full of ideas, sitting about with nothing much to do except think. Last war we were too busy to think much, and since then I'm afraid we've left the thinking too much to the youngsters, and they think like mad, but they haven't got the experience. What's that French thing—if youth but knew, if age were only able? Age ought to be able to think a bit, anyhow. My wife says I've done my bit, and ought to sit quiet and stop fretting, but I find that rather hard work.

There's not much news, I'm afraid. All quiet on the Home Front so far. Rationing looms ahead—that's a new one on me. My wife and daughters laugh at me when I grumble about this butter business, and ask, how about my breakfast bacon? They say I ought to have been through the last war, and this one's a picnic to it. That's damn funny, when you come to think of it. D'you know, honestly, I hadn't realised that in 1918 they couldn't get matches, and sat about like the fox in the fable, hoping luck would send them a bit of cheese. When you think of all the cheese there was knocking about the lines! Still, I suppose it's never too late to learn, and now it's my turn to learn the civilian end of the business. I tell my wife she's getting a regular old soldier, always bragging about what she did in her last campaign.

Well, good luck to you, my boy, and a successful New Year. If you meet any of Little Adolf's friends, give them a kick in the pants from Yours ever, GEO. MARCHBANKS.